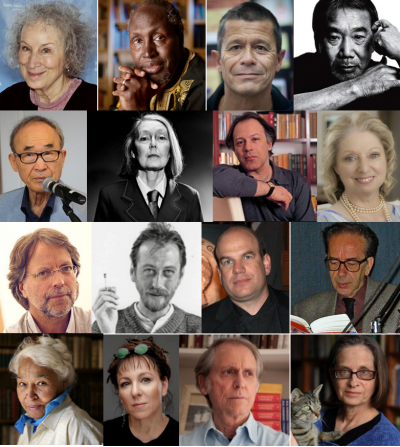 For many of us with literary interests, the end of October’s first week coincides not only with the beginning of baseball playoffs but also with the announcement of the Nobel Prize for Literature. The weeks preceding the announcement see statements of preference and prediction, and the oddsmakers at Ladbroke’s even handicap the prize. Cognoscenti gather (really) to compare notes: Atwood’s up over last year, Murakami’s looking good, and Adonis’s stock seems to have dropped for some reason. Once the winner has been named, the fun takes a different form, with arguments over the writer’s quality (“Jelinek? Really?”) or qualification (“Dylan?!”), or the pleasure of discovering the work of someone you’d not heard of (Mo Yan, maybe, or Svetlana Alexievich). And, of course, we start, by mid-autumn, anticipating next year’s prize, hoping that a long-loved favorite finally gets the nod from the Swedish Academy.

Scandals in the awarding body for the prize have led to cancellation of this year’s Nobel for Literature, with plans for the awarding of two next year. The last few weeks have seen not arguments about who ought to win but, instead, arguments about whether the Prize is a good thing or not, whether we might be better off without it. Well, some say, it’s obvious that the Nobel’s an awful guide to quality. I mean, look at the list of overlooked geniuses (Tolstoy, Joyce, Graham Greene) and the bunch of undeserving winners (John Steinbeck, Winston Churchill, Sully Prudhomme—it’s always Sully Prudhomme, the poor bastard, maybe because he got the first one). Plus it’s all political (Harold Pinter as a middle finger lifted at the U.S. under W. Bush). And these Scandinavian jerks clearly don’t know what literature even is (“Dylan?!”).

There are counterarguments, of course. Sure, there are some Laureates whose work might not have stood the test of time, some who seem to have been chosen for reasons not strictly literary, and some who might have been awarded just because they were hometown heroes (von Heidenstam, Karlfeldt, and the 1974 double-bill of Swedish Academy members Eyvind Johnson and Harry Martinson). But look at where the Academy got it right: Yeats, Mann, Eliot, Faulkner, Laxness, Montale, Seferis, Beckett, Soyinka, Pamuk, Lessing. For one fantastic run in the 1990s, they courted controversy once (Dario Fo), while nailing it with Octavio Paz, Nadine Gordimer, Derek Walcott, Toni Morrison, Kenzaburō Ōe, Seamus Heaney, Wislawa Symborska, Jose Saramago, and Gunter Grass. That’s a way better record than the Academy of Motion Picture Arts and Sciences posted in the same decade (Dances with Wolves? Titanic? Shakespeare in Love? Forrest freaking Gump?!). Is the Nobel sometimes awarded with political motives in mind? Probably. But what’s not? Should the Academy have given the prize to way more women writers? Yes indeed. To more writers from outside Europe, and especially to writers of color in Africa? Absolutely. But I’d like to see all kinds of prizes more frequently recognize artists and work from beyond the usual suspect categories. And as for the definition of literature: the awards to Alexievich and Dylan (and even Fo) demonstrate, to my mind, a salutary broad-mindedness about the category, a useful capaciousness that recaptures some of what “literature” was assumed to include before we narrowed it to fiction-drama-poetry, an expansiveness that we also find in the awarding of the prize to philosophers like Bergson and Bertrand Russell, Sartre and Canetti. While we’re at it, has anyone yet considered David Simon as a contender?

For me, the best thing about the Nobel has been the way it brings attention to writers I might otherwise never have discovered. Would I have come across cheap paperbacks of novels by Knut Hamsun or Hermann Hesse or Par Lagerkvist in the used bookstores I trawled in high school if those guys hadn’t won the Nobel Prize? Maybe. Though I’d bet money in dollars or yen that I would not have found the brilliant work of Ōe or Yasunara Kawabata without the prize to spur the translation and distribution of their work in English-speaking countries. And I’ve been enormously grateful to the Nobel for leading me to Szymborska and Pamuk and Patrick Modiano (and also for backing me up when I kept recommending Tomas Tranströmer and V.S. Naipaul and J.M. Coetzee to anyone who’d listen). Even some folks who agree with me on this point argue that the all-or-nothing nature of the prize limits even this possible positive. Yet I’ve discovered writers (Ismail Kadare, László Krasznahorkai) just through the mention of their names as possible winners; I doubt I would have found them without that publicity.

In this year without a Nobel Prize for Literature (not the first, by the way, though 1935 is the only prizeless year that wasn’t also plagued by a World War), I say we ought to celebrate what is best about the prize—the attention it brings to writers and their work. Let’s set aside the possibility that other worthy writers will be overlooked because only one writer wins in order to discover and instead enjoy the work of several writers who might be contenders. Let’s all go read Margaret Atwood and Ngūgī wa Thiong’o, Emmanuel Carrère and Anne Carson, Haruki Murakami and Ko Un, Javier Marías and Hillary Mantel. And while we’re at it, how about Mia Couto and Nawal El Saadawi and Olga Tokarczuk and, just for fun, Don DeLillo and Lydia Davis. I can make an argument for each of these as a good choice for the prize, and you can add some to the list. We don’t all have to read the same one this year because that writer is the newly crowned Laureate. Instead, we can celebrate the global production of amazing literary art. Just start with the least familiar and most unrecognized name on the list, because that will be most likely what we all do next year, when a winner actually is named.