Meaning in a World Without Hope 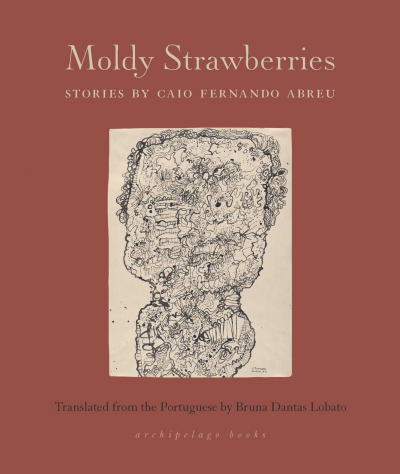 Moldy Strawberries is an inspiring exercise in hopelessness and futility. Caio Fernando Abreu’s short story collection, translated from Portuguese by Bruna Dantas Lobato, serves as a coming to terms with life under a repressive government, life without a brighter future. Abreu wrote in Brazil in the 1980s, through the country’s twenty-one-year military dictatorship. His queer, countercultural writing made him a frequent target for censorship by the Brazilian government, yet Abreu’s writing ultimately prevailed, making him a cultural icon nonetheless. He died in 1996, two years after testing positive for HIV. “Beyond the Point,” a short story featured in this collection, was published in the Massachusetts Review in Spring 2019, also translated by Dantas Lobato.

Abreu’s stories rarely deviate from the themes of hopelessness, queerness, and music. “The Survivors” is meant “to be read to the soundtrack of Angela Ro Ro,” a Brazilian singer whose velvety voice and jazz-inspired compositions make for a fitting companion to a story where the protagonist “smokes incessantly her cheap vodka, no ice, no lime.” In another story, “Passing Through a Great Sorrow” Abreu uses Erik Satie’s “Désespoir Agréable” as a vehicle for the protagonist to understand his own “pleasant despair” in addiction. He references Pink Floyd and John Lennon in other stories, and the title story, “Moldy Strawberries,” begins with the opening lines of “Strawberry Fields Forever” by The Beatles. This psychedelic song complements many of Abreu’s stories, especially the lines “Nothing is real/And nothing to get hung about” which match the sense of unreality that pervades his fiction. In fact, most of his characters seem to live in a dream-like other world, certainly as a means of escapism for both the characters and perhaps the author himself.

The best stories in Moldy Strawberries focus on queer love and attraction. In “Fat Tuesday,” two men meet at a bloco, a carnival street party, and experience an immediate and intense attraction. The exhilaration of drunken dancing, carnival glitter, and the carnality of the two men is interspersed with homophobic shouts from the people around them. Yet the protagonist is indifferent to the crowd’s hate; his lover is “just a body that happened to be masculine enjoying another body, mine, that happened to be masculine too.” The two men eventually make their way to the beach for more privacy, but as they make love they can hear the shouts of crowd getting closer and closer. What would otherwise be a heady story of sex and drunkenness leaves a bitter taste of danger and hate.

“Sergeant Garcia” also plays with the theme of queerness in a repressive society; a young, effeminate man is berated by the titular sergeant at the drafting office, only to be picked up by the officer afterwards. The gruff older man takes the young man to have sex at a seedy hotel presided over by a drag queen known as Isadora Duncan. It’s the boy’s first experience with another man and while the relationship is predatory, he discovers that something within him has woken and “once awakened it would never go back to sleep.” His feelings about his sexual awakening at the hands of an older man are conflicted: after he leaves the hotel alone, he “wants to dance on the flowerbeds, so full of a cursed joy people walking by would never understand” and yet he “[doesn’t] feel anything.” The story has all the naiveite of a coming-of-age narrative, but with the grittiness of noir, neatly woven together through Abreu’s twisting prose.

By far the strongest story, one that showcases Abreu’s poetic writing and self-awareness is “Those Two,” a story of two male coworkers who develop a strong and obviously homoerotic friendship. They initially bond over mutual love for the film, The Childrens’ Hour, in which two lesbian teachers are drummed out of their conservative small town, foreshadowing the men’s own story. The relationship between the two men progresses yet neither has fully realized or voiced their attraction to the other, preferring instead to hide their romance under the guise of intense friendship. One of Abreu’s strengths throughout the collection is his ability to define relationships not by what people say to one another but by what they omit. In the case of “Those Two,” they never speak about their attraction to one another, “the absence they barely knew they felt,” but that exclusion only intensifies their feelings for one another. While Abreu never discloses whether the relationship progresses past friendship, by the end it doesn’t seem to matter; they’ve found something so significant in one another that when they both lose their jobs due to accusations of “impropriety,” neither seems to care.

The strength of some of the stories, in which relationships and atmosphere form tiny ecosystems, is lost in Abreu’s more experimental short stories which can frequently be bewildering. These stories rely heavily on stream-of-consciousness narration that, for some readers, will likely fall flat. Often in second-person, these stories lack the emotional impact of the third- or first-person stories. Without character relationships and plot holding them together, the experimental works at times feel more akin to confused ramblings than short fiction.

Ultimately, this collection focuses on the apathy and angst of living in a repressive society and the pain of leading a futureless life. While challenging to read, Abreu’s most inspiring stories feel painfully relevant. Like many of us, he asks, how does one find meaning in a world without hope?

Helen McColpin is a senior at Smith College and an intern at the Massachusetts Review. She is also Editor in Chief of The Sophian.