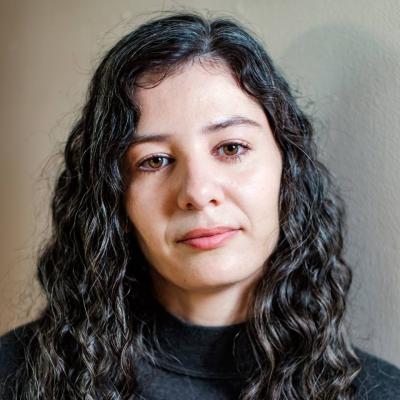 “It was raining, raining, raining, and I was going into the rain to meet him, no umbrella or anything, I was always losing them in bars. I was holding just a bottle of cheap cognac tight against my chest, hard to believe it said this way, but this was how I was going through the rain, a bottle of cognac in hand and a wet pack of cigarettes in my pocket. At one point I could have taken a cab, but it wasn’t very far away, and if I took a cab I could buy neither cigarettes nor cognac.”
—from “Beyond the Point” by Caio Fernando Abreu, translated from Portuguese by Bruna Dantas Lobato, Spring 2019 (Vol. 60, Issue 1)

Tell us about one of the first pieces you translated.
It was another story by Caio Fernando Abreu called “Beauty, a Terrible Story.” At first, it was a way for me to play with language and feel a little closer to Brazil, my first home. But the more I worked on this translation, the more I fell in love with the author’s style and with translation itself.

What other professions have you worked in?
My first real job was at the front desk of a beach resort when I was a teenager. Since then, I’ve mostly had jobs in the different stages of publishing: working the cash register at a college bookstore, writing about books for a newspaper, editing a literary journal, teaching creative writing.

What did you want to be when you were young?
I’ve wanted to be a writer since I was a little kid, and then as a teenager I also became interested in translation. Translation might seem like a strange thing for a teen to be into, but it was a lot of fun for me. I spent a lot of time playing with words and thinking about the strangeness of language.

What drew you to write a translation of this piece in particular?
I love that this piece defies both gender and genre expectations. We follow the narrator as he drunkenly walks to his lover’s house, a man who might or might not reciprocate his feelings. Abreu’s meticulously controlled and paced prose allows us to be very much in his shoes, to experience his anxieties and shame as well as his lust and desire for companionship alongside him. I hope readers will be as moved by it as I was when I first read it.

Is there a city or place, real or imagined, that influences your writing?
The sand dunes in my hometown, the way they move across the landscape.

Is there any specific music that aids you through the writing or editing process?
I listen to a lot of piano solos while I write, especially Bills Evans and Satie, and pause the music from time to time when I need to concentrate on the sound and rhythm of the words on the page. Abreu writes in one of his stories that everything by Satie sounds the same, which is maybe why I find it comforting. “Like rain,” he says.

Do you have any rituals or traditions that you do in order to write?
Most days, I only begin writing and translating after 10 pm, when I’m done with my chores for the day and can just focus on the work in front of me, with no distractions. I do my best writing when my to-do list is a distant memory and I let myself lose track of time.

Who typically gets the first read of your work?
My boyfriend. He’s fluent in both English and Portuguese, like me, and has a great ear for language.

If you could work in another art form what would it be?
I would write plays. I’ve always thought that I’m actually a playwright at heart, always trying to capture the sound of people’s voices.

What are you working on currently?
I’m finishing up my translation of Abreu’s story collection Moldy Strawberries, where “Beyond the Point” originally appeared. I’m also working on a short novel of my own, set in Brazil and Boston.

BRUNA DANTAS LOBATO was born and raised in Natal, Brazil. A graduate of Bennington College, she received her MFA in fiction from New York University and is currently an Iowa Arts Fellow and MFA candidate in Literary Translation at the University of Iowa. Her stories, essays, and translations from the Portuguese have appeared in Harvard Review, Ploughshares online, BOMB, The Common, and elsewhere. She is a 2018 A Public Space Fellow.