Peaceful Hunger Striker on the Bridge, Violent Radical Underneath It was some minutes past five in the morning. The sky was turning bright and birds were relentlessly tweeting. Sparrows pecked around us. The bridge to the Central Government Complex has been blockaded by police and barriers, making it an island on which ten of us hunger strikers had been hemmed since yesterday afternoon, above the Lennon Wall, isolated from the rest of the world.

Last Sunday, over a million Hong Kong people had peacefully marched in protest against the Extradition Bill amendment, but the government insisted on bringing it to a second reading in the Legislative Council on 12 June as scheduled. Civil Human Rights Front again organised a protest outside the Legislative Council Complex on the same day. The night before, youngsters like my students had taken it a step further, laying siege to the Complex to try to stop the Legislative Council from meeting. By yesterday morning, people started to occupy the main roads of the area, which were filled with tens of thousands by the time I arrived.

At three in the afternoon, I had gotten separated from my colleagues on Harcourt Road, which was filled with a crowd in black. At the moment when I finally squeezed through the masses and went above the Lennon Wall to join the hunger strikers, an assault by the police was suddenly launched. Twenty to thirty riot control officers, equipped with batons, pepper spray, and gas masks charged and swung at the citizens, like beasts released from cages, chasing after their prey. I was still stunned by the sudden violent expulsion, but other hunger strikers sitting by the wall moved to the middle of the bridge at a gallop. Instinctively, I joined them, and we sat in front of the riot control police, raising our hands high in an attempt to block the charge. Facing the charging police, the citizens on the bridge were frightened and struggled to escape. Some who had been previously standing on planters were forced to climb higher, then leap dangerously to the ground two meters below. 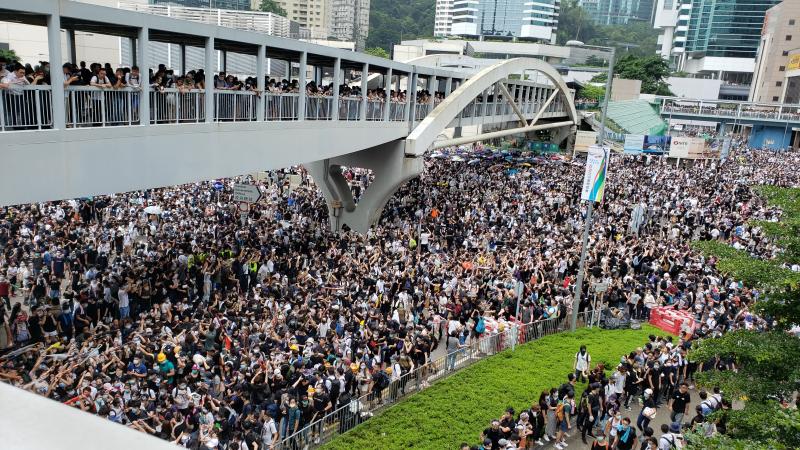 Meanwhile, under the bridge, there was a rumble: an irritating chemical gas had been released into the air, leaving people coughing, shedding tears, and struggling to open their eyes. What  mayhem! At that moment, we hunger strikers did not know that bean bags and rubber bullets had also been fired on the crowd below. We sat in two rows in the middle of the bridge, between the riot control forces and the citizens. Though the police had stopped charging temporarily, they were still swinging their batons from time to time, threatening the citizens behind us who refused to retreat. Two feet away from us, we saw the boots and batons of the riot control police, and we couldn’t tell if we would be run over by the police in their attempt to expel the people behind us. The citizens calmed down and began nagging and coaxing the police, who responded with even more vulgar scolding, “Drop that! Are you trying to throw it at us?” But when we looked behind, no one was picking up anything.

For more than an hour, we sat in front of the cordon line of the police, raising our hands and then putting them down to rest. Whenever a word was spoken by the citizens behind us, the riot control police would respond with even fiercer gestures. In that moment, we witnessed how the police were able to dominate the situation with their unquestionable power, overwhelming people at all costs. 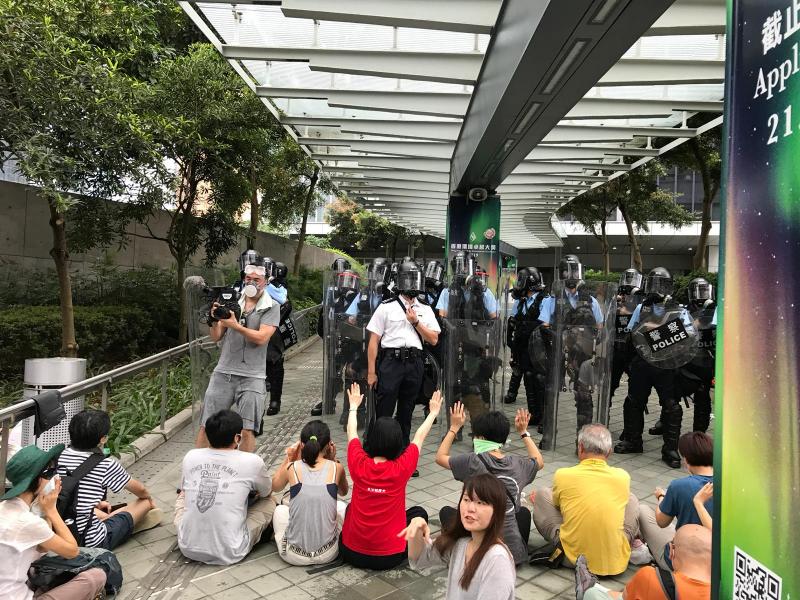 After an hour or so, the police took off their masks and seemed more peaceful. In contrast with the angry masses below, were we simply unthreatening? Looking down on Harcourt Road from the bridge, I saw tear gas repeatedly being fired. From Harcourt Road to United Centre to Queensway and Pacific Place, protesters were under assault. The unarmed protesters, however, did not want to retreat, and they continued to advance once the gas dispersed. No matter the situation, the call for “withdrawal” of the bill never ceased. Heaven and hell were separated by a bridge in Admiralty. How absurd that we were we so “well-treated” on the bridge, while our brothers and sisters were fighting with their lives down in the pandemonium below.

By six in the evening, the police had successfully cleared the area around the Central Government Complex. The bridge was no longer blocked, which meant police control was diminished. I received a phone call; during the sudden, brutal sweeping of the area, one of my students had left a backpack at the supply station near Citic Tower. I asked a police officer on the bridge the direction to Citic Tower, and he amiably told me that the entrance should have been closed by now, and he even found a security guard to show me the way. At that moment, I was still uninformed about what had happened when the police fired tear gas at the crowd gathered near Citic Tower, an area that had been granted a Letter of No Objection by the Hong Kong Police Force. Not until a few days later, when I went back home after the hunger strike, did I realize the extent of the violence and injury as thousands of panicked people had tried to squeeze into Citic Tower through the narrow entrance. It was sheer luck no one died in the stampede. A high school teacher was shot in the face and lost 70% eyesight in his left eye. A contract driver of Radio Television Hong Kong on duty with the news crew was shot by tear gas and his heart stopped beating for a time. A man who suffers from lung cancer was shot in the lower abdomen and violently beaten up by police. These were just a few injuries among many that happened on that day.

Tim Mei Avenue looked like a war zone, with scattered supplies and belongings left behind. I searched through each supply station, which had turned into ruins or trash piles, until I arrived at the roundabout opposite the entrance to the Legislative Council, but I didn’t find the backpack. At that point, a squad of some ten riot control police came up and scolded me. I did not hear what they had said clearly until a policewoman slightly taller than me grabbed my arm and forced me back onto the walkway. Then I heard them: they stated that the place had been the scene of a riot and they accused me of causing troubles there. No matter how hard I tried to explain that I was simply a hunger striker on the bridge, and that I was down here searching for my student’s bag, the police had a terrible attitude: they insulted me, my role as a university teacher, and my students. A commander even ordered the other police, “Search her bag. See if there is anything related to previous incidents. Arrest her at once if there is a wire cutter!” I had never before faced such a hostile search by police, and I could not contain my anger. I wondered, how could young people refrain to take revenge against the violence and goading of the police, especially when they faced such an overwhelming armed force with only their unarmed bodies?

On the bridge I had been simply a “peaceful” hunger striker, and yet I immediately became a “violent radical” on the street below. The same person with the same dress can be judged totally differently in a different context. Such a definition of “violent radical” has absolutely no connection to the quality or the actions of a person; it is simply a manipulation by the authorities. Which is utterly preposterous! How many of us have naively trusted the alleged authority of the state, ignorant of its violence against the people. Have we thereby enabled it to grow into the monster it is today?

Chan Yin Ha is a Senior Lecturer at the Chinese University of Hong Kong.

Walter Chun Hay Chan is a MA student of Archaeology at University College London, and previously an undergraduate in English at the Chinese University of Hong Kong.