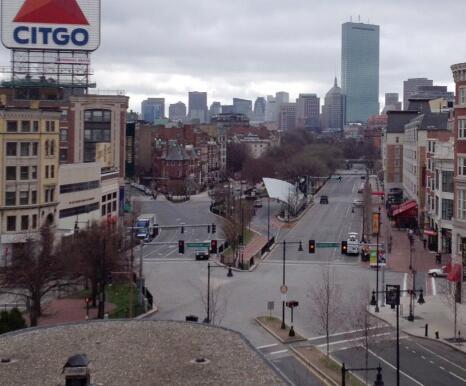 It seems unlikely that I will be doing today what I do probably at least 300 days of the year: walking from here in the North End across Boston proper, to the Museum of Fine Arts, or else Kenmore Square, and back again. As I write, looking out on the Italian American club across the street—whose members are usual drinking cans of Budweiser by now, never mind that it’s early in the morning—all I can hear is sirens. One of the men involved in the shootings at the Marathon has been killed, the other, one assumes, will be apprehended, or dead, soon. And until then, we’re all staying in.

I am less myself when I am not in Boston. I do not have a Boston accent, and I have not always lived here—although mostly—but I am of these parts in a way I did not know it was possible to belong to a place. My life has come apart in Boston, a process that began last March. It felt like a protracted rape, just as it felt like the city itself had been raped on Monday. I stand on the very spots where the two bombs went off hundreds of times each year, on my walks. Boston is a walking city, and it is through walking Boston that I have begun to heal myself from my own personal crisis, one that had me, at times, unsure if I could go on. I thought, admittedly, of putting myself in front of a train. On some days—I called them train days—the pull was so great that I had to force myself, as I mulled things I shouldn’t have been mulling, to get off my royal Boston arse, and walk across this city, to walk my beat. I’d compose in my head, and I wrote said arse off, trying to write myself to a future, to hope, to a better life, to readers, to the masses, with the Boston skyline, Copley Square, and Trinity Church in the background, my backers, my ever present companions. I knew, even in those hazy moments, that I was walking to live, and that this was a place where you could do that. I also knew that I was, as person fused to these parts, in my heart, my soul, the core of my being, what is now referred to here, in signage and speech, as Boston strong. For that is what this city is, and it is why this is a place where things are dealt with differently than anywhere else.

Let me tell you about a hockey game from earlier this week, the Bruins vs. the Sabres—the opponent did not matter, neither did the outcome on the scoreboard. I told the woman I had begun dating, something I did not expect I’d be able to do, who is not of these parts, that something special was going to happen at the game. She asked what. I said I had no clue. Just watch. It’s Boston. Something will happen.

Still, I was utterly gobsmacked when the crowd took over the vocal duties of the anthem from the anthem singer. I was also crying, but if you saw it, you were probably crying, too, no matter where you are from. I am a writer because I was a hockey player. Or it played a very big part, anyway. In hockey, I see narrative made visual, geometry turned into architecture, sound into music. Hockey, if you know how to watch it, is not the hooligan stuff that many people in publishing would dismiss it as. There’s an art there, a grace, as there is to the entire culture, and all of its nuances. One of the nuances of this hockey culture, here in Boston, is that after the anthem, the crowd begins chanting, “Let’s go Bruins,” a chant which was instead turned out the other night as “Let’s go Boston.” Yes. Let’s indeed. During a break in the action, later on, the PR guy asked everyone who had just run in the Marathon to stand up. Then he asked anyone who had ever run in the Marathon to stand up. Next, anyone who had ever volunteered at the Marathon. And finally, anyone who had ever been to the Marathon. I wondered, for about two seconds—in other words, the time it took me to look out my window, across the street—if anyone else was standing up in their apartments. And there, in room after room, were my neighbors, doing the same, a city standing as one.

Were you to come on one of my epic Boston walks with me, I would probably horrify you by pulling you into some random alley—I mean, who goes in alleys, right?; that can’t be good—and breathlessly point out some ancient stone cemented into the wall where a restaurant dumps their fish heads that you would have used as a measuring point if you were an eighteenth century cartographer. “Behold,” I will say, sounding like a twat, but no matter. Boston is like that, an ever unfurling visual narrative that has a knack for being one you shape your own life to.

As those hard months of my own went on, as hard months are doubtlessly coming now for so many people here, a phrase would sound again and again in my mind, just coming to me, from somewhere: Take the long road, and walk it. Not literal walking, necessarily. But rather the walking you do inside yourself, to get yourself through whatever it is you must go through. But I will say that the moment they get this guy, and I am done with work for the day, I am heading out on my seven mile stroll, one which will take place both outside of me, in a sense, and inside, too. For in Boston, as in life, we walk, and we walk on. Although a hockey player would more properly say, we walk the fuck on. Which is better yet.