Yesterday, we needed something for the MR Facebook page. We noticed that it was Roger Federer’s birthday, but how could that be post-worthy for MR?

The first issue pulled from the archives, serendipitously, had a pretty great tennis poem. It worked beautifully to tie a popular person with MR!

The poem “The Midnight Tennis Match” was written by Thomas Lux. He elegized a very special guy, Frank Stanford.

How could we have forgotten Frank’s birthday?

Do not forget the American writer Frank Stanford. He is mostly admired for the poems he wrote and the myth of his short life. In particular, young writers of poetry become obsessed with the book The Battlefield Where The Moon Says I Love You.

Actually, it is pretty rare to come across Frank’s writing in journals. A few exist. Finding a Frank Stanford poem in the pages of MR really caught me off guard. Was he in Fayetteville whenever he submitted “Tapsticks”?

And so, thanks to Roger Federer, we remember Frank Stanford, a great contemporary American poet. He had his finger on the pulse of poetry. He was a lion.

Go read Frank Stanford. Bless whatever substance his being was made of. He was a great writer. He’s dead. Damn. 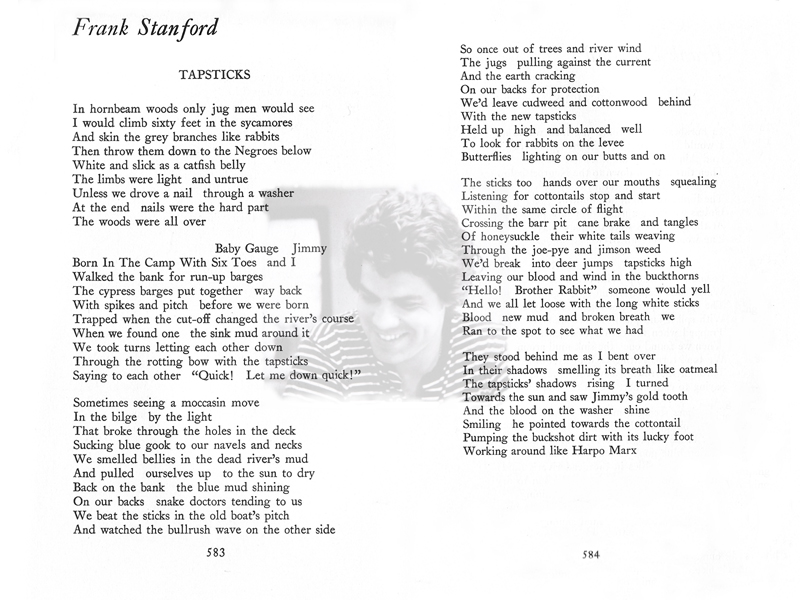