Three weeks ago, Enver Hadžiomerspahić arrived at the Ars Aevi Bridge on Sarajevo's Miljacka River, followed by a small army of reporters; he was there to mark his resignation as the director of Ars Aevi, the most impressive collection of contemporary art in the Balkans. Instead of giving a speech, Hadžiomerspahić took out a broom and started cleaning the bridge’s gutters. 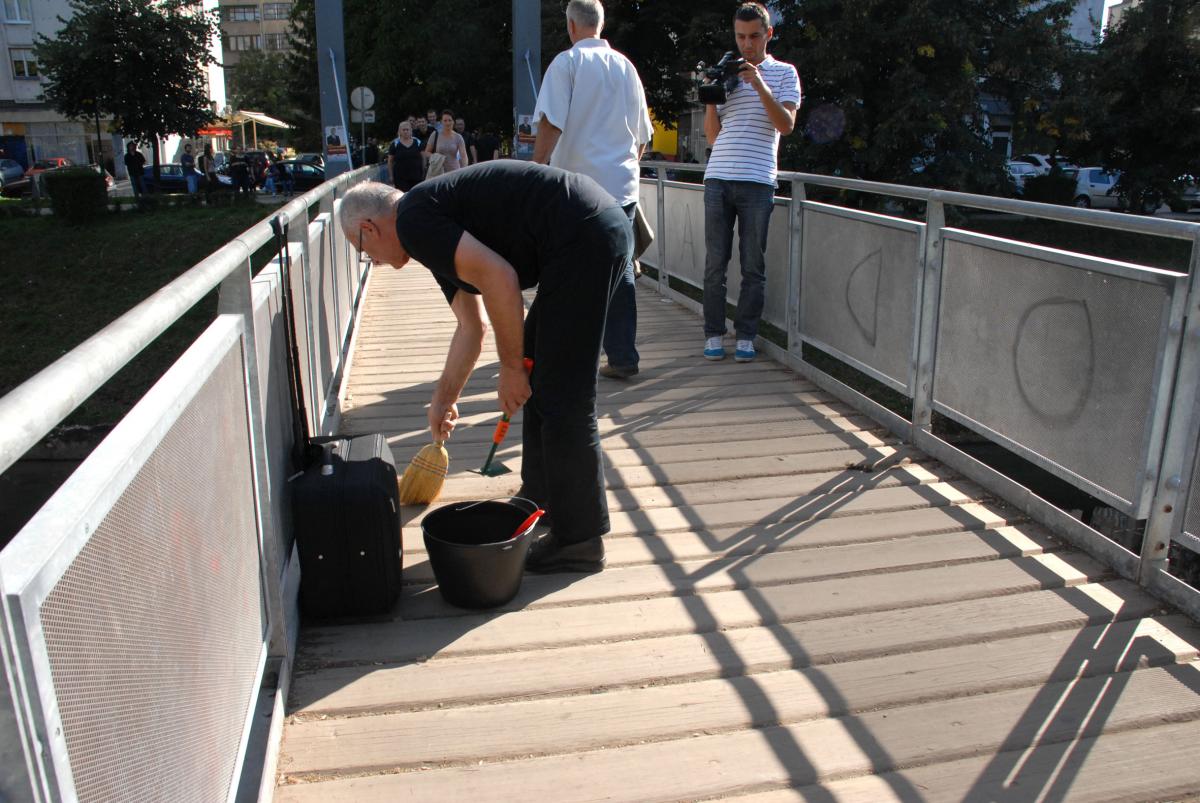 The reporters gathered to film the spectacle. After a similar public performance in the summer of 2011—when he busked in the streets of Sarajevo to collect money for the construction of a museum building to house the collection—Hadžiomerspahić chose to mark his resignation by cleaning the Ars Aevi bridge which has fallen into disrepair as a way of showing the public just how shameful the government's disregard of culture is.

The bridge was designed by the world-famous architect Renzo Piano, who also financed its construction in 2002. It was supposed to serve as a preview for the museum building itself — also designed by Piano—which has yet to be built. 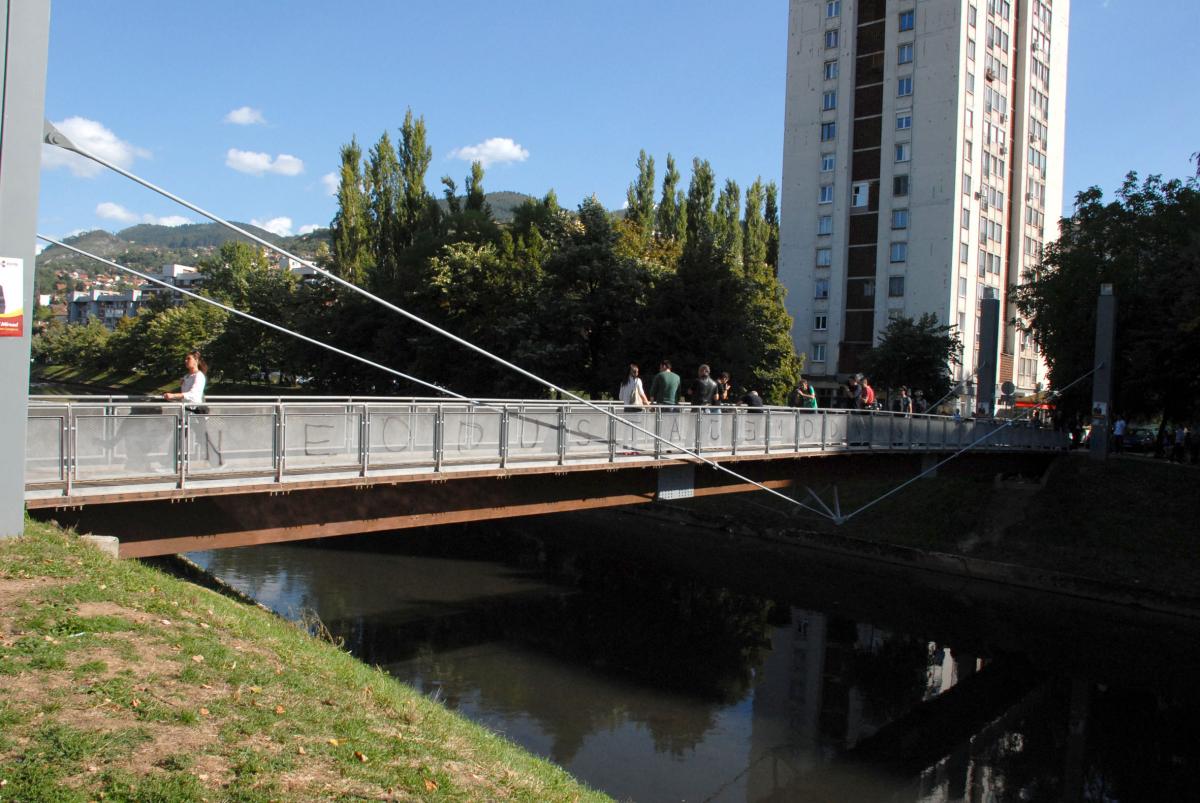 Although the Bosnian government promised to fund the construction of the museum, in the past ten years construction has been postponed on several occasions, while numerous flashy, sprawling shopping malls have been built around the site.

Soon enough, a curious bystander approached him. "I wonder what kind of a trick this is, this cleaning?" he asked.

Untroubled by the passive-aggressive tone of the middle-aged gentleman, Hadžiomerspahić kept on cleaning.

"Would you explain what’s all this ‘cleaning’ about?"

Hadžiomerspahić stood up and calmly responded: "This is the bridge [designed] by the famous architect, Renzo Piano, who gave it as a gift to the citizens [of Sarajevo]. However, no one has ever cleaned the bridge and it’s not being taken care of; it should have been protected from the elements by now and made ready for the winter..."

The man interrupted him: "So it wasn't. So what?"

Hadžiomerspahić continued: "I came here today to say that we should take better care of this bridge out of respect for the citizens who use it constantly, but also out of respect for the famous architect who designed it, built it and donated it. We can't be so indifferent towards a project of such importance."

The man pauses, and then concludes: "Well, thanks - but what’s the point?"

Hadžiomerspahić has had to deal with this type of reaction for over twenty years, but it’s still surprising to hear. After all, contemporary art was not foreign to Sarajevo before the recent war, partially thanks to Hadžiomerspahić himself. He and a few of his friends organized the Yugoslav Biennale of Contemporary Art, or the Yugoslav Documenta, on two occasions, in 1987 and 1989. The third Biennale was scheduled for 1991, but it was never held because of the outbreak of war in Slovenia and Croatia, which would engulf Bosnia and Herzegovina by 1992.

Starting any kind of a cultural project while a war raged through Bosnia and Herzegovina in a city besieged by a military force keen on destroying everything—including cultural landmarks—was naturally met with skepticism. It made no sense to construct new museums while other museums were being destroyed. And yet the idea of a contemporary art museum occurred to Hadžiomerspahić while, as he was evacuating from a nearby house, he watched Sarajevo’s Museum of the XIV Winter Olympic Games burn to the ground. In his mind, creation became a necessary act of resistance against the aggression then shelling the city into oblivion.

Hadžiomerspahić did everything he could: he carried the collection’s catalogs printed in a besieged Sarajevo to the 1993 Venice Biennale. He lobbied for his idea relentlessly. He grew a network of friends and supporters, including people at some of the most prestigious museums, galleries and centers of contemporary art in Milan, Prato, Venice, and Bolognano in Italy, Ljubljana in Slovenia, and Vienna in Austria. He organized these centers as nuclei for the creation of the collection and the storage and display of artworks donated to Ars Aevi until the war in Bosnia ended, and then he brought the collection home to Sarajevo in 1999. Once home, he organized the largest exhibition of contemporary art in the region, spread across 107,600 square feet of gallery space. Along the way, he contacted and established a relationship with many big names in the contemporary art world. The Ars Aevi collection now boasts works from artists including the likes of Marina Abramović, Joseph Beuys, Nan Goldin, Anish Kapoor, Sol LeWitt, Cindy Sherman and Joseph Kosuth; the list containing over 150 artists and their works is impressive, but no one in the Bosnian government seems to be impressed.

After the collection returned to Sarajevo, it was displayed at the Historical Museum of Bosnia and Herzegovina while awaiting the construction of its own building. This “temporary” arrangement lasted for another four years, until the Historical Museum decided to close the collection to the public due to a lack of funds, or more specifically, a lack of government funds. The collection was then held hostage in awful conditions until it was finally moved to its current location at the Skenderija Sports and Cultural Center in 2007. Things were looking up—a new home for the artworks had been found, and the officials promised more significant financial backing for the museum. All this was, again, only temporary. Last winter, the Center’s general director threatened to kick Ars Aevi employees out of their offices, and throw the artworks out on the street if the rent wasn’tpaid. An odd request, considering that , this person was placed in his managerial position by the same people who owe the rent money.

Nothing seems to impress local officials enough to commit funds to the project; not the fact that the collection was under UNESCO’s patronage, or that Hadžiomerspahić was in the meantime knighted in Italy and France, or that UNESCO Goodwill Ambassador Renzo Piano practically gifted the museum’s design because the collection in his opinion was “an expression of collective international will.” Big names in the art world, accolades from the outside and foreign dignitaries came and went. Promises were made, but never kept.

This kind of maltreatment is not unique to relatively new museums like Ars Aevi: about one hundred yards from Ars Aevi-designated lot (marked by Daniel Buren's "Field of Flags"), the country’s oldest museum recently closed its doors to the public several days after Hadžiomerspahić’s performance at the bridge. The National Museum of Bosnia and Herzegovina, established in 1888, is home to numerous artifacts of national and international significance, including the Sarajevo Hagaddah, the oldest Sephardic Jewish document in the world dating to 1350. It was forced to shut down, despite having managed to survive three wars—Word War I, World War II and the Yugoslav wars—without ever closing its doors. The financial problems of this institution mirror those of Ars Aevi, but at least there was a door to hammer shut.

This cannot be explained simply by the mismanagement of the institutions themselves. Statistics show that the suffering of cultural institutions is not due to an empty budget: in the period between 2007 and 2010, the government spent 11.8 billion convertible marks (7.82 billion dollars). Bosnia and Herzegovina's cumbersome system of one state, two entities, ten cantons and a district sucked out the most of it. During this period, 9.5 billion marks, or 6.29 billion dollars were used solely for covering the wages of those employed in the public administration, and the government has shown no intention in slowing down, all at the expense of those who need the support the most.

During the 2011 protests against the threatened eviction of the Ars Aevi collection, Enver Hadžiomerspahić gathered a number of Sarajevo’s most important celebrities to record and issue their personal statements. Bosnian Oscar-winning director Danis Tanović chose not to speak; he was filmed walking around the collection instead. 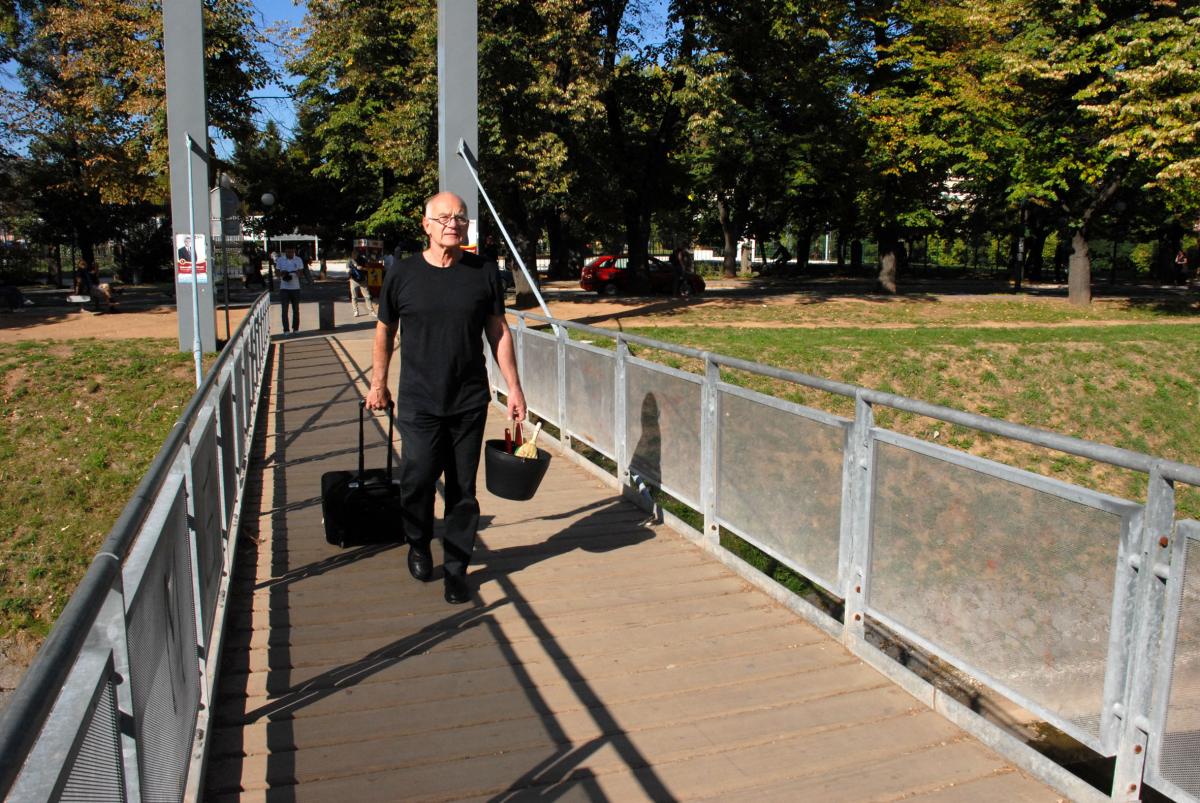 He reached the exit, turned to look at the camera, and then switched off the lights and walked out of the dark and quiet gallery. This resonated deeper than any words he could have spoken. After all, it is the reality of the situation in Bosnia and Herzegovina: lights being switched off, doors being nailed shut. The shovels one can hear are not breaking ground for long-overdue foundations; they are preparing to bury the dead instead.