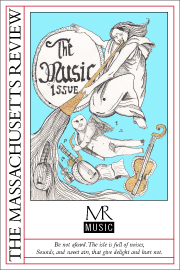 from Veloso, Walking into the Wind

The Last Bohemian of Avenue A,

The Coming of John with Apologies to W.E.B. Du Bois and Amus Mor

from The Voice Imitator

Music from a Farther Room

from This Side of the Sea

from Here Be Sirens

The Bugler Responds to Mary

from Veloso, Walking into the Wind

The Blues: Where Love Ends Badly

Then Elvis Drops to One Knee

In Their Own Time

from The Scarlet Professor

Charles Ives at the Spinnet

Music in the Kingdom of the Heart

by Bianca Stone, with text by Ben Pease

The Fidelity of Music

Tryin to Write a Music Poem

For a Fistful of Sitars

For a Fistful of Sitars

from This Side of the Sea

Song of Eleven Consonants and Thirteen Vowels, for G. Stein

Writing the Life of the Concert Promoter

The Persistence of Music

from Here Be Sirens, an opera in one act by Kate Soper

Lips, a poem by Gerald Stern

What to Take, a poem by Barbara Ras

The Bugler Responds to Mary, a poem by Rebecca Foust

Without Night-Shoes, a poem by Jane Hirshfield

from Caetano Veloso, Walking into the Wind, nonfiction by Igiaba Scego, translated by Frederika Randall

Mezzo, a poem by Tanya Grae

Muzak, a poem by Carol Potter

Loss, a poem by Roger Greenwald

from The Last Bohemian of Avenue A, a poem by Yusef Komunyakaa

The Coming of John, an essay by John H. Bracey Jr.

The Blues: Where Love Ends Badly, an essay by Gerald Williams

The Romantic Mode, a poem by Jen Jabaily-Blackburn

Then Elvis Drops to One Knee, a poem by David Kirby

Variable, a poem by Mary Peelen

from The Voice Imitator, art by Anna Schuleit Haber and Yotam Haber

In their own time, a poem by Casey FitzSimons

from Radio Imagination, a novel excerpt by Seiko Ito, translated by Hart Larrabee

Randy Weston’s African Rhythms, the Day After, a poem by Randall Horton

Ornithology, a poem by Peter Fiore

from The Scarlet Professor, a libretto by Harley Erdman

Charles Ives at the Spinet, a poem by Donald Revell

Music in the Kingdom of the Heart, a poem by Laura McCullough

Twilight on Kool Darkness, a poem by Bonita Lee Penn

Bassoon, a poem by Ken Waldman

Silent Swan, a poetry comic by Bianca Stone, with text by Ben Pease

The Page Turner, a poem by Amanda Anastasi

The Fidelity of Music, a poem by Geffrey Davis

Trying to Write Music Poem, a poem by Diamond Forde

My Crying Towel, a poem by Laura Kasischke

Music from a Farther Room, a poem by Gary J. Whitehead

For a Fistful of Sitars, an essay by Gabriele Ferraris, translated by Laurence de Richemont

from This Side of the Sea, nonfiction by Gianmaria Testa, translated by Jim Hicks

The Rolling Deep, a poem by Anne Marie Macari

Song of Eleven Consonants and Thirteen Vowels, for G. Stein, a poem by Katie Farris

The Tabla Player, a story by Farah Ahamed

Old Folks’ Singing and Utopia, an essay by Tim Eriksen

Writing the Life of the Concert Promoter, an essay by Steve Waksman

Saved by Soul, an essay by Rashod Ollison

For Adrienne, an essay by Julia Conrad

The Persistence of Music, a poem by A. Molotkov