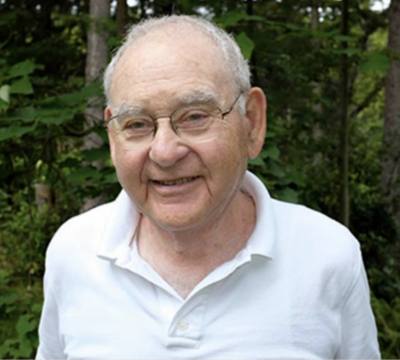 Just a couple of days after I arrived to Amherst, Jules Chametzky called to invite me for lunch. My wife and oldest son (the youngest was born three years later) were still in New York. The following day, we met at a local restaurant. Right away, he greeted me in Yiddish, my childhood language. Still a stranger in a new place, that instantly made me feel rooted.

I remember loving his Brooklyn accent from the start. It felt zaftig. It was unlike the Yiddish I had grown up with in Mexico, more earthly. We talked about Abraham Cahan, Anzia Yezierska, Israel Joshua and Isaac Bashevis Singer, and I forget what else. And about family, of course: where our respective ancestors had come from, what year they had immigrated, to where, and so on. To be on the move—allegorically—was something Jules appreciated.

This was the beginning of a conversation that lasted almost thirty years. I could describe it as a friendship and it would be accurate. But Jules was something more for me.

We would meet regularly for lunch. Different restaurant, same characteristic warmth, clarity of mind, and zaftig demeanor. Or we would meet at his house, with his wife Anne becoming another illuminating conversant. I looked forward to these occasions with immense anticipation; so did Alison and my boys.

Even though I could have been his son, Jules invariably related to me as an equal. In fact, as time went by I realized he was indeed a kind of surrogate father—my American father. He invited me to imagine who I would have been had other accidents shaped my history.

Happily, for most of our relationship I had, until rather recently, my own wonderful Mexican father. The two would joyfully embrace each other whenever they coincided in town. They each distilled a unique type of wisdom. My Mexican father, an actor, was enviably alive on stage. He could be inspiring but also unpredictable. In his old age, he disliked being offered roles of older characters.

Jules, in contrast, was soothing. He was perfectly comfortable in his own skin. Aging for him was a natural process. Not even at the end, when I visited him in the hospice, delirious and clearly in pain, his body less than habitable, did he appear impatient. He talked about being grateful; I did too, profusely. I wasn’t sure Jules could understand me, so I tried in Yiddish and then he smiled. I reminded him that one of my boys always called him Jewels.

I don’t know yet how to get used to the absence of my two fathers.

Ilan Stavans is Lewis-Sebring Professor of Humanities and Latin American and Latino Culture and a Contributing Editor at the Massachusetts Review.