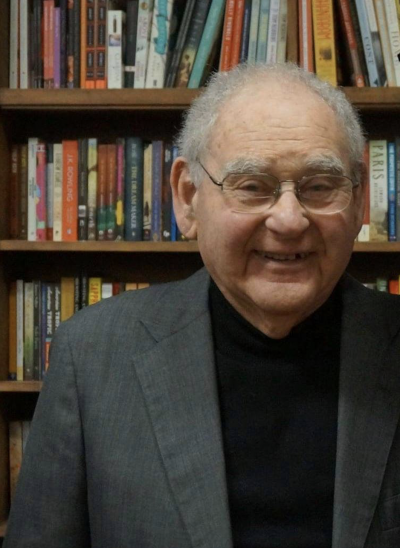 Jules was my rabbi, and I think he was the rabbi for many of those who came to his service at Wildwood Cemetery on September 27. He was our rabbi in the spiritual sense, in the police procedural, and in the parental sense. He looked after us. He counseled us. He shared his wisdom. He opened doors, and he watched our backs. He frowned upon our enemies.

He appeared to know or to have known everyone of any significance on the planet – James Baldwin, Chinua Achebe, Saul Bellow, Alfred Kazin, Leonard Baskin. He met Gregory Peck in the old House of Walsh; he recognized his voice and, of course, introduced himself. He thought that Gregory Peck was more than handsome enough to have been a movie star. He knew the Normans – Birnbaum, Podhoretz, Mailer. He liked to share his friends and their histories with his other friends. On vacation, he wanted to talk before breakfast to his beloved Joann about Isaiah Berlin; she stopped him until after coffee; he stormed off but came back, because she had the car. It was a rare moment of pique.

He was perhaps the most sociable human being I have ever met – his and Anne’s home for many years in Amherst was a combination of salon and never-ending house party. There was always glorious food, abundant drink, fancy Russian cigarettes with colored papers, a graduate student from almost anywhere living upstairs in the apartment. You never knew who exactly would turn up, but the talk was fascinating and the atmosphere was glamorous.

And yet, equally, Jules had a gift for intimacy and the small encounter, a willingness to meet and talk with almost anyone and turn strangers into friends. In hospice, in these last long weeks, he was still himself, keeping track of current affairs, wanting to know the latest gossip, proudly showing off his son Peter’s latest book, advising the nurses and the aides on what to read and lending them books he thought might broaden their horizons, and enhancing the pastor’s understanding of Judaism. After his death, the staff at the Fisher Home shared their sense that Jules’s ability to see beyond himself even at the end was quite remarkable.

And, they said, perhaps most remarkably of all, he always said thank you. He did. We loved him. We miss him. We were lucky to have been able to share his life. As long as we live we will remember him, and in our memories he will be alive.

Lee Edwards is a former Dean of the College of Humanities and Fine Arts at the University of Massachusetts Amherst and former editor of the Massachusetts Review.