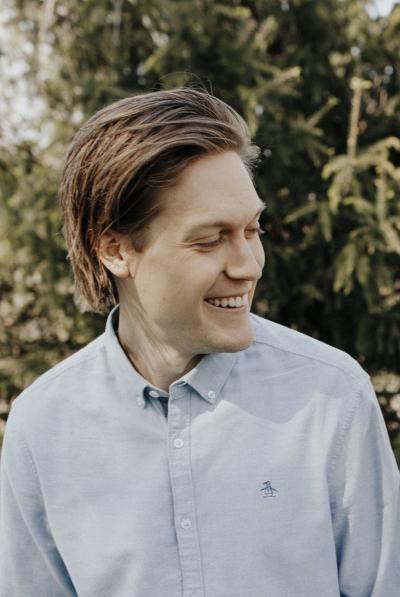 shallow floors for mangrove leaves and pickerel weed.
Even sleeping half the day, each quarter hour
—from "Anxiety Medication," Volume 62, Issue 3 (Fall 2021)

Tell us about one of the first pieces you wrote.
In elementary school I wrote a story about a kid who gets lost at a candy store inside a strip mall. I don’t remember much else about it, but surely it was harrowing and sugary, and probably a troll was involved.

What writer(s) or works have influenced the way you write now?
I’m a serial imitator, so I can’t read a book of poems without trying to copy that person, mostly to bad effect. The reigning queen of my poetic universe is Marianne Moore, who was as formally innovative and technically precise as she was morally and philosophically serious. Moore schools my frequent resorting to animals in poems that otherwise represent human subjectivity, but I’m scared to say she influences me—then I might be held to her standards. I strive to be influenced by the likes of Moore.

What other professions have you worked in?
I spent a few summers as an underperforming employee at a bus garage. I also worked at a restaurant which was kept afloat almost exclusively as the private kitchen of its wealthy owner. So, I was the host to the occasional glut of tourists, but mostly to just one couple. The managers and I passed shifts by exchanging information about life as a teenager and life as middle-aged, so the tips were scarce but we all had fun. My favorite job is teaching high schoolers through a summer program, which I do as often as I can. I spend a lot more time teaching college students, but high schoolers are fun and, in my experience, less freaked out about grades.

What did you want to be when you were young?
I wanted to be—dun, dun, dun (gasp!)—a preacher. They seemed to spend a lot of time talking and reciting long stretches of poetry but, as my dad warned me one day at a Bob Evans, the demands placed on them are practically limitless. Eternal, even. When we learn writing, we’re often taught to steer clear of preaching—in other words, we aren’t supposed to advocate for a cheap or sentimental “message.” But the best preachers I know are more mystical and less thesis-oriented, which I hope poems can be too.

Is there a city or place, real or imagined, that influences your writing?
I grew up near Lake Michigan, and now that I’ve been away for a few years I realize how lucky I was to live in that landscape. When I was ten and when I was twenty-five, on weekends I would climb with friends up one of the massive sand dunes that wall the lake, which was like hiking a mountain that you visibly displace with every step. Then everyone would run full tilt down the dune’s front side, with a fifty-fifty chance of making it to the bottom without crashing under your own forward momentum and maybe recovering with an impromptu somersault. One way or another, though, everyone wound up in cold, freshwater whose opposite shore you couldn’t see with a telescope.

Do you have any rituals or traditions that you do in order to write?
I prefer to write in the morning because it’s the easiest time for avoiding other work, and I can usually get up before my family does. Coffee, of course! And an oversized art book, which I use to jar my imagination awake when I’m having a hard time writing. When all else fails, I write the wildest, most illogical similes I can think of. Bad similes are like caffeine or jumper cables for the imagination.

Who typically gets the first read of your work?
My friends Lauren and Bess. They’re brilliant writers and readers.

If you could work in another art form what would it be?
I would be a background singer and backup guitar player for some rock star like Phoebe Bridgers or Esperanza Spalding.

What are you working on currently?
I’m working on a collection of poems, tentatively titled Conceit, which twins the poetic device and emotional vice of that name. I’m also working on a Ph.D. dissertation which concerns, I think, American poets (mostly mid-twentieth century) whose sense of their own public role was shaped, limited, or endorsed by another humane discipline altogether: history.

What are you reading right now?
Patricia Lockwood’s No One Is Talking About This, Henry Louis Gates Jr.’s The Black Church, and William Wordsworth’s poems.

ALEX MOUW'S poetry, nonfiction, and scholarship have appeared or are forthcoming in West Branch, Colorado Review, Ruminate, Twentieth-Century Literature, and elsewhere. He is a PhD student in English and American literature at Washington University in St. Louis.