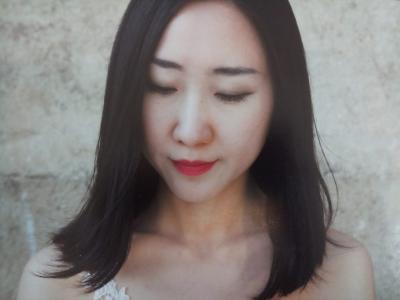 This is a story of a mole.

It was about the size of a pea, light aubergine in color. He still remembers how it felt under his fingers: how it stood, pert and taut, when pressed down; yet how pliantly it leaned over when caressed sideways. A little oddity he would always remember her by.
—from "Me, Myself, and Mole," Volume 62, Issue 3 (Fall 2021)

Tell us about one of the first pieces you wrote.
“Virgin Ghost on North Korean Border” is the second short story I wrote a few years ago. The story now has become the opening chapter of my novel “8 Lives of a Century-Old Trickster. (Forthcoming from Harper, 2023 spring.) The short story was inspired by my father’s childhood. His hometown was very close to the border between South and North Korea, and he used to tell me about this mysterious demented young lady who had frequented his and nearby villages. My imagination took off from there.

What writer(s) or works have influenced the way you write now?
So many! Unwomanly Face of War by Svetlana Alexievich, The Robber Bride by Margaret Atwood. Gillian Flynn and Elizabeth Strout.

I’m also a fan of Stephen King, Dennis Lehane, The Sympathizer by Viet Thanh Nguyen, Life of Pi by Yann Martell. Yoo Shi-min. The Nickel Boys by Colson Whitehead, and so forth.

What did you want to be when you were young?
A fiction writer. It was the first dream I’d ever had as a child.  As I got older, however, I’d sort of given it up, thinking it wasn’t a profession that normal people could pursue in reality. But the passion for fiction writing returned to me later in life. I wanted to give it a try at least, in order to live without regrets. I began to write short stories in English several years ago, and I finished my first novel this year.

What inspired you to write this piece?
It was inspired by the true story of Arnaud Du Tilh, which I’d learned about in a history class in college. This story was also turned into a film called The Return of Martin Guerre. “Me, Myself, and Mole,” however, is quite different from the true story of Du Tilh; the imposter in my story is a woman, and its setting is post-war North Korea. The general atmosphere of my story is much darker and grittier, given the tragic past my female protagonist has survived.

Is there a city or place, real or imagined, that influences your writing?
Ruins! Modern ruins to be exact. Once, I watched my husband playing a video game called “The Last of Us Part 2,” and its images of post-apocalyptic modern ruins stunned me. Abandoned houses and hospitals and theme parks, empty and covered in rust, green vines and banyan trees. To me, such places always seem so rich with latent stories and ghosts of the past.

Is there any specific music that aids you through the writing or editing process?
I happen to be writing a short story inspired by a rap song! “The God of Small Things” is a song of a South Korean rapper Nucksal, which was partially inspired by the famous novel of the same title. It’s now the title of my short story as well. It’s a small narrative of young Korean people working in a convenience store. I must have listened to this rap song at least a thousand times. I’m listening to it about ten times each day; I like the song and listening to it helps me get into the mood of the story.

Do you have any rituals or traditions that you do in order to write?
Nope! Maybe I’ve got to have one, since I’m still struggling with time management!

If you could work in another art form what would it be?
I love cinema as much as I love literature, so I guess something in the field of cinema.

What are you working on currently?
I was working on my second novel, Empire of V, which is inspired by true stories of rescued dogs in Korea. But then last month I took a little break and I’ve been working on the aforementioned short story, “The God of Small Things.” It’s quite a departure from my previous stories, which are about wars and slavery.  For me, writing this story is like having a breather, before I finally return to writing my second novel about, again, another type of slavery and human violence.

What are you reading right now?
Life Lessons from a Brain Surgeon by Dr. Rahul Jandial. It’s a nonfiction book about human brains.

SEULMI LEE was born and raised in South Korea. Her short stories have appeared in the Antioch Review, Meridian, Black Warrior Review, Pleiades, and Shenandoah. “Me, Myself, and Mole” is a standalone chapter from her first novel, 8 Lives of a CenturyOld Trickster. The novel is inspired by the life of her great aunt, one of the oldest women to escape alone from North Korea.