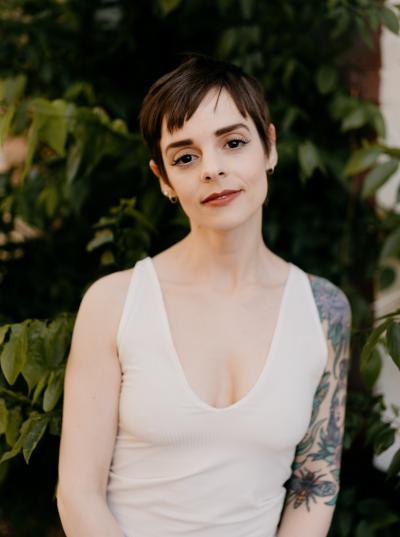 Tell us about one of the first pieces you wrote.
Anyone who’s encountered other interviews with me or kept up with my posts on social media might be somewhat familiar with this story already, but when I think of my earliest “work,” I always go back to a little poem-essay I wrote while visiting my grandparents in North Carolina for Christmas one year. At the time, a small herd of deer lived near their house, and they often grazed in the empty field behind it at night. The special thing was that this herd included a luminous albino doe, and one night my grandmother woke me up so I could see her for myself out the window. In a way—as cheesy as this may sound—that deer became my muse then, and you might even say is still my muse now. It was a formative experience. And, I’m so lucky that my grandmother kept (and scanned!) the little piece I wrote about it the next day, titled “The Deer.” Here’s the full text (transcribed with original spelling, etc.):

I am 9 year’s old. I am visiting my grandparents in fearing ton N.C.. one day my Grandmother menchond to me about an elbino deer liveing in the aria. that night when I went to bed my Grandmother seiad to me that the deer was outside. When I Looked at the deer thoue the closet window I was amased a beutiful wight creacher stood outside. a lovly sight for my eay.

What writer(s) or works have influenced the way you write now?
I’m always interested to hear other writers talk about their influences, because so often it seems like they don’t bear much resemblance. I’m not sure whether that’s the case with my own work, too, but I do know that as I’m working toward the sort of far-off, unreachable qualities of the pieces I love most, it’s my “failure” to get there that allows my writing to become its own thing, a different kind of poetry. At least, that’s what I tell myself when I’m feeling particularly inadequate or discouraged, haha. To paraphrase Jericho Brown, we write the poems we can write.

So, at the moment, I would include Ada Limón, Sarah Manguso, Tomas Tranströmer, Victoria Chang, and Audre Lorde among my main influences. But those influences have also evolved over time as my writing has. The first book I remember feeling especially inspired by was Swithering, by the Scottish poet Robin Robertson, which I read during my first real poetry class as an undergraduate. Later, as I was working on my MFA and then PhD, I also spent a long time trying to soak up whatever I could from Laura Kasischke and Dorothea Lasky. I also want to add that I’m constantly inspired by work from emerging and debut poets, too—right now Benjamin Garcia, Paul Tran, and Solmaz Sharif quickly come to mind.

What other professions have you worked in?
Well, I’m not sure whether these would be called “professions” in my specific context, but my first-ever job, which I started when I was fifteen, was at a tiny independent movie theater called The Inwood, located here in Dallas. The theater’s building was historic, and—best of all!—haunted, and the main lobby gave me the feeling of being inside an old, gilded cruise ship. Then once I got to college, I picked up another job as a bar trivia hostess. I loved that gig because each time I hosted a game (usually at big restaurant chains like Chili’s or TGI Friday’s), I got a free drink or two, free fries to snack on, and I could choose my own music to play in-between questions. My best night on that job was when I played a song by this not-super-well-known band called Copeland, and it turned out the band members were actually there—in the bar—playing my trivia game! They’d stopped in while on tour.

At other points before I started teaching college, which is what I do now, I also worked in retail clothing and at a couple of swanky bars in uptown. But, let’s face it: nothing compares to a free drink and free fries.

What did you want to be when you were young?
A pop star, 100%. And actually, believe it or not, that was a dream I kind of pursued for a while. I started taking voice lessons twice a week when I was about seven, and soon after that I began competing in local and state-wide singing competitions. While I was still in elementary and middle school, I auditioned for and was cast in a few plays and musicals produced by local theater companies, like the Dallas Theater Center (my favorite was A Christmas Carol, which I joined in third grade, because I got to leave school every weekday in December to perform in the matinee). Then, when I had to switch schools for high school, I auditioned for a spot at Dallas’ arts magnet, Booker T. Washington High School for the Performing and Visual Arts (which is well-known for some alumni, including Nora Jones and Erykah Badu), and shockingly I got in. I even started college as a vocal performance major(!). But then, during my second semester, I took Jenny Browne’s intro to poetry class, and that changed everything. I’m lucky it did, incidentally, because in reality becoming a pop star just wasn’t in the cards for me, haha.

What inspired you to write this piece?
Right before the pandemic hit, I was able to spend a whole week with one of my favorite poets—and a favorite friend!—Leila Chatti, to whom my poem is dedicated. Her debut collection Deluge had just been released, and throughout that week I was able to hear her read from and talk about those poems at several events, so the way she engages with the figure of Mary in those pieces was fresh on my mind, as was her totally brilliant approach to structure and form. Leila and I talked a lot about our poems-in-progress and processes during that week, too, and at the time she mentioned having a particular interest in abecedarians. Of course, I was inspired by those discussions, and I felt especially drawn toward the challenge of writing my own abecedarian, which was something I’d never attempted before. So, when I decided to really give it a go, it seemed natural to write a piece that would be in conversation with Leila’s work.

Is there a city or place, real or imagined, that influences your writing?
This question is timely, since I was just recently re-reading Italo Calvino’s Invisible Cities. Like the ephemeral places Calvino describes in that book, I think it would be hard to “locate” my work in any real, physical sense—as least on the whole, although of course there are physical settings and locations within many individual poems. Overall, I tend to write mostly about memories and desire—so, if anything, you might say my poems live within the realm of the past and in aspirational futures.

Is there any specific music that aids you through the writing or editing process?
There was a time when I really enjoyed listening to music while writing, and often I’d go with something kind of ambient, like Bon Iver or Elliott Smith, or even Eric Whitacre’s choral arrangements (which are still favorites of mine, by the way). But, especially in the last six years or so, it’s gotten harder for me to focus with music on. Sometimes I can write while sitting outside, with people passing by and talking and whatnot, or with an old favorite movie playing quietly in the background, but the most optimal sound for me these days is silence, or something adjacent to silence. I need to hear myself think.

Do you have any rituals or traditions that you do in order to write?
This is an interesting question for me, because, on the one hand, I am very ritualistic in general—I’m clinically obsessive compulsive. But on the other hand, I also try to consciously work against any writing rituals or traditions that might hinder my ability to actually write. I believe being a writer today requires lots of resilience and adaptability, especially for folks who often rely on temporary fellowship and residency gigs, and therefore have to remain somewhat nomadic. In a perfect world, I would be able to write in crowded airports, and in coffee shops, and at my friends’ houses, and pretty much anywhere else. Unfortunately, most of the time, I can’t, but I can at least limit the other limiting factors, like needing a certain kind of pen, or a certain kind of start to my day, etc. 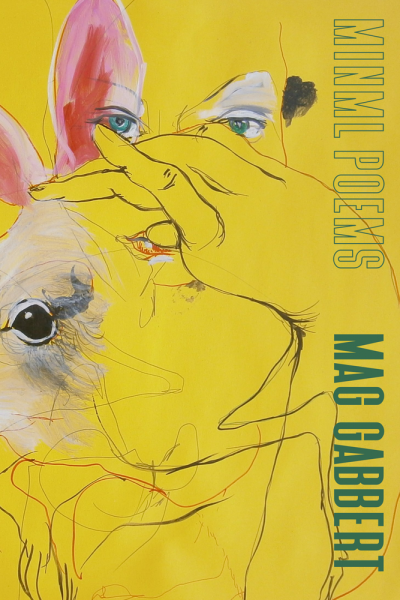 When I’m at home in my normal writing zone, I do like to sometimes light a candle, and I’ll take my notes down on colorful paper, which I find pleasing; and, no matter where I am, I like to start my process by reading a few favorite poems by other writers (and these change from day to day). Overall, though, I try to stick with habits that can be recreated in a variety of settings, and without many specific materials. Returning to the page can be hard enough as it is; I don’t need an extra excuse not to show up.

If you could work in another art form what would it be?
Oh, this one is pretty easy. I love making ceramics! Just to be clear, however, I’m not exactly *good* at working with clay—I build everything by hand, because I don’t even know how to use a wheel properly—but I can figure my way around your standard cups and bowls and the like decently enough. My crowning achievement so far would have to be the three decorative centerpieces I made a couple years ago to put out during the holidays: The Ghosts of Christmas Pudding, Ribbons, and Morning.

What are you reading right now?
I do the bulk of my reading in the morning every day, while I jog for an hour on the treadmill, because that’s when I’m able to focus best without the distraction of my phone or pets or whatever else. I’m still always switching between a few books at a time though, partly because I have to revisit the texts I’m teaching during any given term, and also because I like to change things up from day to day depending on my mood. I might be in the middle of a good novel, for example, but on that particular day I feel like reading a new poetry collection. And, of course, I’ll read other things here and there as I encounter them online or pull them off my shelf to reference throughout the day, too.

So, the books in my treadmill bag right now would include Hala Alyan’s The Twenty-Ninth Year, Tod Goldberg’s The Low Desert, Oliver Sacks’ Hallucinations, Italo Calvino’s The Complete Cosmicomics, and Franny Choi’s Soft Science. In the past month or so I also finished reading Michael Cunningham’s The Hours, Angela Pelster’s Limber, and Lynda Hull’s Collected Poems, which I loved!

MAG GABBERT holds a PhD from Texas Tech University and an MFA from the University of California at Riverside. Her essays and poems can be found in 32 Poems, Pleiades, The Pinch, Thrush, Hobart, Waxwing, and many other journals. A chapbook of Mag’s visual poetry, titled Minml Poems, was published by Cooper Dillon Books in 2020. Mag has received fellowships from Idyllwild Arts and Poetry at Round Top; she teaches creative writing at Southern Methodist University and serves as the interviews editor for Underblong Journal.