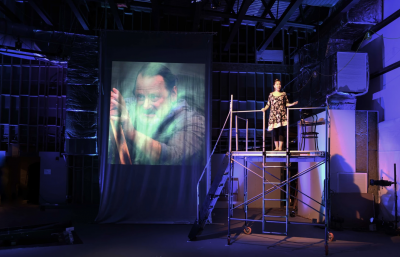 For the last two years I’ve had the privilege of watching Serious Play Theater Ensemble develop its new production, Moving Water. As one of the photographers helping with this project, I have been enchanted by its action and imagery. The subject, however, is far from enchanting: it’s chilling. Fresh water is disappearing from the earth while, paradoxically, global warming is melting icecaps and threatening low-lying coastal areas with submersion.

In Florida, a high rise condo has collapsed killing over a hundred people, and others are in danger. Everything in our daily lives is affected: seventy percent of our produce comes from California and its aquifers are being rapidly depleted during a long and severe drought, in which a spark from a malfunctioning generator or power line, or a careless camper, can instantly ignite the crackling dry vegetation. There are at present sixty-two wildfires burning in the US, and not nearly enough water to deal with them all. Planes continue to drop fire retardant chemicals. Poorly paid and overstressed firefighters and hot shot teams risk their lives daily. The Colorado River, which the United States controls, is also important to Mexico. The river level is very low. 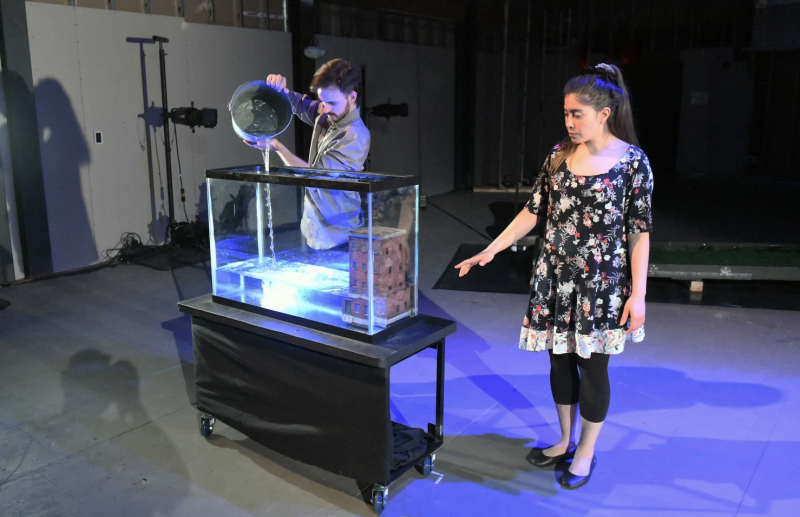 There is an elemental quality to all of this: fire, water, earth, and air represented by wildfires, floods, droughts, and other catastrophic weather events, such as an increasing number of tornadoes and hurricanes. The blackened earth and mudslides complete the four. Western Europe has seen the worst flooding in decades. People are dying and becoming instantly homeless everywhere. The country of Yemen is running out of water, exacerbating the power struggles and violence there. Several countries in Africa are in danger of running out of water, most recently, Cape Town, South Africa.

We are water. We drink it, bathe in it, cook with it, manufacture with it, swim in it and take for granted that it will always be there. We have been given a wake-up call. 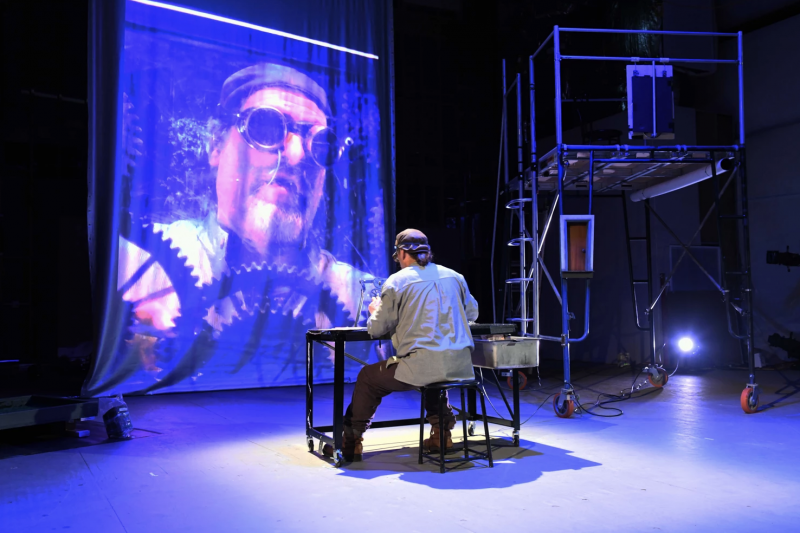 Serious Play Theater Ensemble, in collaboration with playwright Eric Henry Sanders, composer and musician Jonny Rogers, actors Kermit Dunkelberg, Ximena Salmerón and Will Swyer, artistic director Sheryl Stoodley, set and video designer Robin Doty and lighting designer Sabrina Hamilton, have engaged in what John Walton, director of Fol Espoir, has called “Devised Theater.” This is “a process in which the whole creative team develops a show collaboratively.” This approach may seem like a no-brainer: isn’t that what theater is? But traditional theater has been less collaborative, with an emphasis on the individual artists rather than a finely tuned ensemble. In Moving Water, the result shows the excellence of this process. 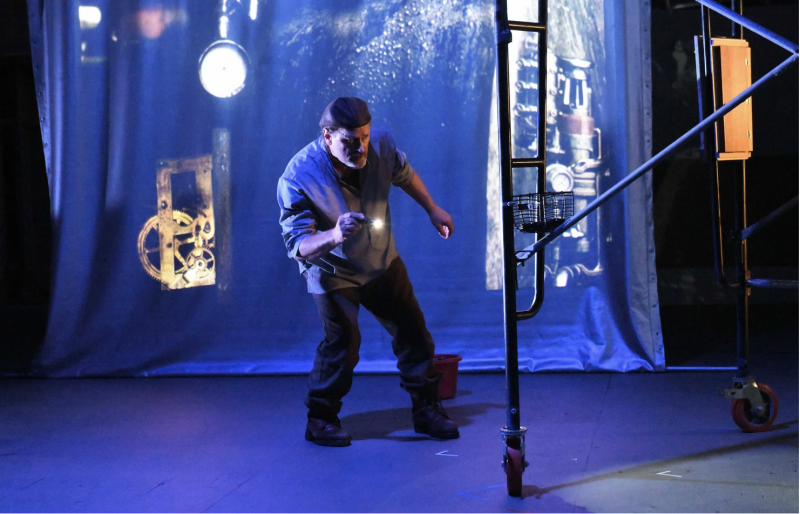 The company has embodied the water crisis with three actors, set into an electronic environment of projections and startling, fauvist lighting. Moving Water is performed on a bare stage with a moving scaffolding and various movable set pieces. The production is visually amazing. 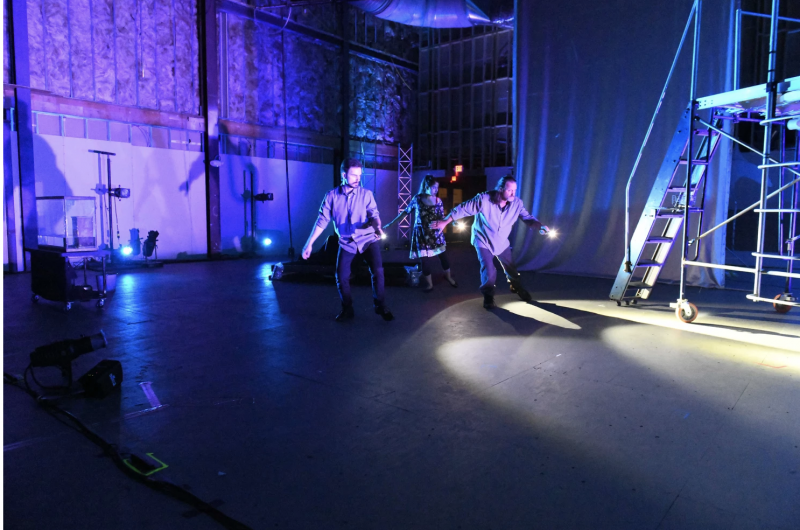 “The story is set in an older apartment building in a US coastal city. Its imaginative, well-meaning superintendent is somewhat detached from reality, but nonetheless extremely concerned with the threat of storms and rising ocean waters on the building he sees as his home. He befriends an oceanography student from Mexico and together they search for a missing resident from Pakistan who has disappeared. The characters each have a unique association with water that drives the overall storyline both real and metaphoric concerning rising sea levels, water scarcity and insecurity, and our unique human relationship with water.” 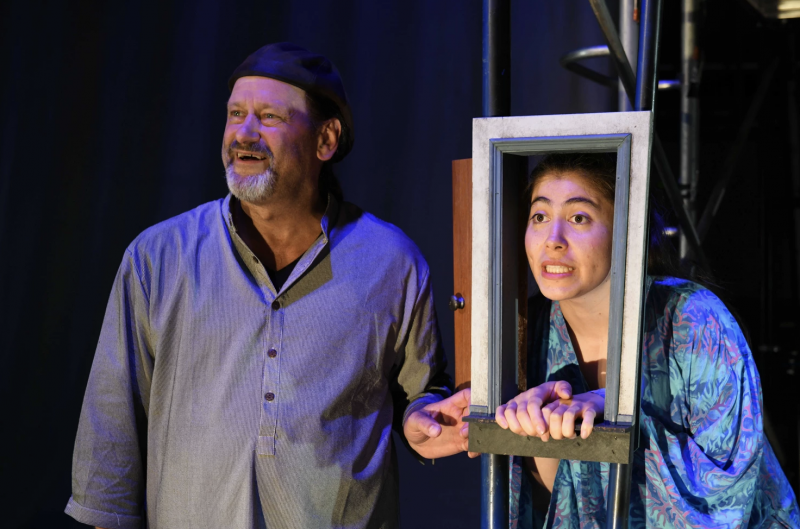 A few seats have opened up now for all shows, and there is a waiting list for tickets to see the live performances too.

There will also be online performances:

There will also be talkbacks after every show with water experts. Contact kofest.com for tickets.

Doug Anderson is an American poet, fiction writer, and memoirist. He served as a navy corpsman attached to the Marines in the Vietnam War, and written about his experiences in Vietnam in both poetry and non-fiction. Among other books, he is the author of the poetry collection The Moon Reflected Fire (1994), the memoir Keep Your Head Down: Vietnam, the Sixties and a Journey of Self-Discovery (2000); his most recent book of poems is Horse Medicine (2015).