Ordination of the Cherry Trees

- By Greg Snyder and Ruth Ozeki 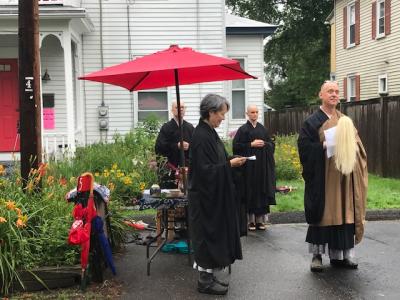 Thank you all for coming. We are here today to ordain these seven venerable Kwanzan cherry trees that the City currently plans to cut down as part of a controversial and, we believe, ill-conceived repaving project. And in addition to these seven, the three younger trees on the end of the block—a redbud, a younger Kwanzan cherry tree and a Montmorency cherry tree—have said that they would like to be ordained, too! These three trees were planted by our neighbors Terry and PJ. A few years ago, the USA garbage truck slammed into the redbud, and although it is making a valiant recovery, it too is slated for destruction, along with all the trees on this side of the block.

These seven venerable cherries were planted by our neighbor, Danny Maguire, who has lived in 6 Warfield for seventy-five years and who worked in the Smith College gardens and grounds for most of his life. He planted the trees thirty years ago with his friend Ed Wing, who was a gardener at Smith. Ed, who died in 2000, raised the cherry tree seedlings in the Smith greenhouse and gave them to Danny to plant on our block. In a recent email, after our first annual Warfield Place Cherry Blossom Festival, Danny wrote, "Ed would be so pleased that so many people enjoy them."

We were hoping Danny would be able to be here today. He’s always had an interest in Buddhism, but he’s in an assisted living facility now, and I don’t think he was able to make it.

So, why are these trees slated for destruction? The City of Northampton claims that they are old, diseased, and need to be removed.

We, who live with these trees, do not agree, and so we consulted an independent arborist. His name is John Berryhill, and he is a certified arborist. He is not employed by the city.

John, in his report, writes:

I am a certified arborist with the Mass. Arborists Association and have been certified in tree risk assessment the International Soc. of Arboriculture's Tree Risk Assessment Qualification. I was recently given the opportunity to assess the condition of the Kwanzan cherry trees that line the sides of Warfield Place. I am aware of what has been said of their age and condition, and how some have argued that their current state supports the idea of proceeding with plans to repave the street and sidewalk that envelope them. I feel compelled to share my strong belief that these trees are not in the poor condition that has been described in other assessments that I have heard, and I implore decision makers to pause and consider the value that their current, precious state of maturity provides our community.

I have heard the terms "pathogen", "decay" and "decline" used to describe the condition of these trees and can say with extreme confidence that they are not diseased, not in rapid decline, and are actually showing signs or vitality. Tip dieback that is apparent on a few trees is likely a consequence of extreme drought that occurred in 2017 and it is encouraging to see sprouting occuring, indicating that the tree is actively recovering from that stress.  All trees appear to have desirable structural strength relative to their size and the potential loads they could experience from weather.

Although I am not aware of all the considerations that have been made while planning this work, I must strongly push back against the idea that these trees are frail, causing unacceptable risk, and good candidates for removal.  These trees are experiencing a rare and precious moment of maturity, in a growing environment where that is seldom seen. Mischaracterizing their condition to support a paving project would clash so harshly with all this city has done to honor and celebrate the value of urban trees.

These trees are living beings who are soon to be killed, although they are clearly not yet ready to die.

But today is not a funeral. It is a joyful occasion. The ordination ceremony we will be performing today will ordain these seven Japanese cherry trees as Soto Zen priests. The ordination of trees is a custom that started in Thailand and spread throughout Asia. It is a way of protecting trees by acknowledging them as sacred, honoring their precious lives, and recognizing all that they do for us.

The preceptor then, one-by-one, communicates silently with each ordinand. After
communication, the preceptor states the following quietly to each tree and takes a leaf.

The taking of a leaf is the cutting of the root of clinging. When this root is finally
cut, you are safe as the original body of all life appears to deluded minds. Wearing
monastic robes, you offer to our delusion the teaching of freedom.

After the last leaf is taken, they are placed in a bowl that is returned to the altar. 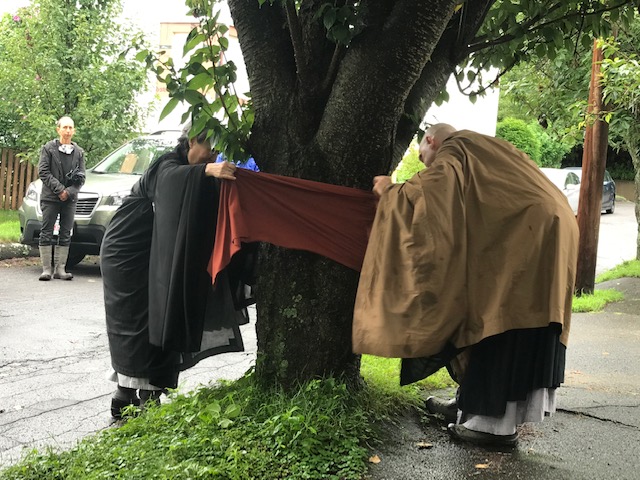 The assembly joins in prayer, and then the preceptor, with the help of the jisha, wraps each tree in Buddha’s robe. Koshin comments that new priests often need help adjusting their robes, so it is customary, and altogether traditional, for older priests to help them.

It is clear that each of you live deeply in accord with the great precept of non-harm, that you are devoted to all sentient life, and that you take refuge in the awakened mind of interconnected being.

Good disciples of Buddha, long before giving you these robes today, Mother Earth gave you your true name and her true precepts by which you live. You were born of Buddha mind, one with Buddha mind, one with all being. Embodying your true nature, you live for the benefit all beings. Today, we only recognize the truth of your being so that those of us with deluded minds might awaken from our arrogance and confusion.

We now honor you as servants and teachers of Mother Earth’s deepest dharma. Those who respect you will now call you Obosan. We are each of us grateful for your teachings and your life, and will do our very best to treasure and protect you. 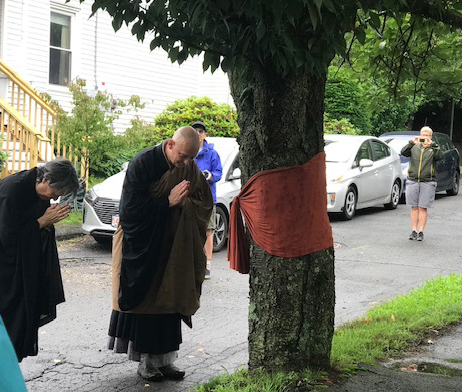