The Heart and Power of Cuba and Its People 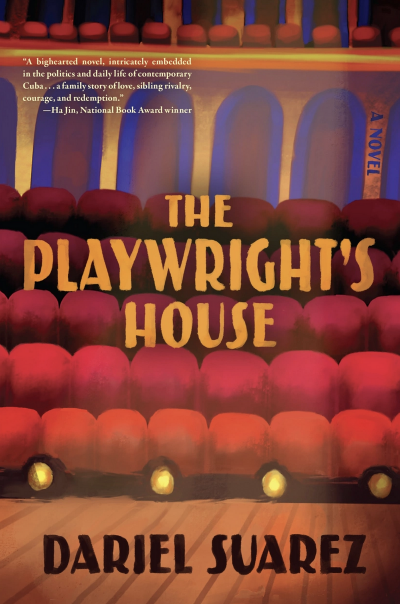 A Review of Dariel Suarez’s The Playwright’s House

In his debut novel, Dariel Suarez takes the reader into the heart of Cuba, of Havana, of the people of the island. As a Cuban American, I notice how the people of the island are often erased from the stories set in Cuba, the stories written “about” Cuba. Cubans often suffer from a dehumanizing romanticization if not utter erasure from an imperial gaze that doesn’t know how to fit the people into their view of the island they vacation in or dream about. Yet Suarez is too skilled a writer, knows the people of Cuba too well, and The Playwright’s House has too much heart and power, to do anything other than keep Cubans front and center in this novel.

Suarez was born and raised in Havana, Cuba, until he and his family immigrated to Miami in 1997. His first book, A Kind of Solitude, won the Spokane Prize for Short Fiction and was published by Willow Spring Books. For that collection, Suarez wrote eleven short stories that were set in Cuba, during what was known as the “Special Period,” due to the food droughts and power outages that followed the fall of the Soviet Union. A Kind of Solitude and The Playwright’s House are in a conversation with each other, both building an impressive cast of characters that paints a vivid picture of the island where Suarez was born, and where my family comes from.

The novel follows Serguey and Victor, brothers in Cuba whose paths have split since their traumatic childhood. The book opens with both brothers at a performance of their father Felipe’s play in Havana. Serguey is a lawyer who has fully bought into the dictatorship’s lies and party line. With his wife, Anabel, he lives in a nice apartment that was gifted to them by his boss, Gimenez. Serguey’s apartment is so nice, is so high up in the sky, that when someone throws a bottle of rum off their balcony, they can’t be sure if it has hit and killed someone on the street. Victor is the flip side of the coin, living and working in the black market in order to make ends meet. Most of Serguey’s and Victor’s interactions the past few years have been when the former has gotten the latter out of legal trouble, a situation that has exacerbates the separation they feel. The fact that Victor lives with their father only furthers Serguey’s sense of distance from his family. The opening chapter ends with Felipe and Serguey promising to have lunch together soon. Instead, shortly afterwards, Victor shows up at Serguey’s door to announce that the family home has been ransacked, and that Felipe has been arrested with no explanation.

From that moment on, Serguey leaves the comfortable façade of the “home” he had made for himself and Anabel, and Suarez deftly takes the reader through Cuba, with Serguey and Victor taking turns playing the parts of Dante and Virgil in a tour through Cuba’s legal system and black market. As the brothers do what it takes to get their father out of jail, we see a large cast of characters, from activist/journalists who post stories online and an old friend turned computer hacker, to a Catholic priest and a santera. Serguey and Victor turn to each of them as they try to save their father. Like in great political thrillers and noirs of le Carré and Chandler, Suarez creates characters that add pieces to the puzzle that not only show us Cuba, but emphasize the steps Serguey and Victor must go through in order to try to save their father. Such stories are all too common in Cuba, and they reveal what living in a police state does to the psyche of everyone on the island.

The novel tackles so much of Cuba, of her people—from architecture and art to the love of baseball and coffee. But it also captures how all of that beauty and love is oppressed by the government. Early in the novel, Serguey thinks about a line from the last play his father wrote, describing “the heartbreaking resilience of a neglected place” in reference to Havana. Beauty happens despite the dictatorship, not because of it, like a flower poking through a crack in the concrete.

Where Suarez’s writing really shines is in the many scenes that show how well he knows his island, scenes where you laugh, smile, sit in a room with his protagonists as they share a beer or cigarette, or walk El Malecón with them. I, for one, felt as if I were sitting in Miami, hearing stories from my parents and mis abuelos, or in Cuba proper, having a rum with my friends. At one point, Serguey and Victor go to a tourist-only restaurant, where they are snuck in, like a scene out of a warped Goodfellas. It is moments like this where Suarez gives us the insider look at Cuba that so many readers crave, but rarely get access to.

And yet, without undercutting the political ramifications of his novel, Suarez always comes back to his characters. The trauma within the family, between the brothers, the dynamics between Serguey and his wife(?) Anabel, or Anabel and her sister, always returns to the forefront. In this book Cuba’s dictatorship is not allowed to further erase its own people. Nor can the dictatorship erase the beauty of those people, no matter how hard it might try. Suarez explores Cuba and its people with as little a filter as possible, and we readers spend time in a Havana more familiar to me than that in any other book I’ve read in English.

Cubans are often lost in the translation in English stories, frequently seen only as part of the setting, as the scenery. But The Playwright’s House puts Cubans front and center, dealing with problems specific to their lives and the dictatorship that oppresses them. Suarez does a beautiful job of deconstructing the romanticized or politicized images of Cuba; he tells a story that is as much a political thriller as it is a character study of how people think, how they exhibit their free will, and how they break the mental, physical, and spiritual chains of living in a police state. Long after you’re finished with the book, Suarez’s beautiful debut novel will leave you wanting to live in that world, hoping for a drink with these brothers and sisters, hoping for a better world, and a freer Cuba.

At one point, Serguey defines Victor’s philosophy as “if you’re going to need a lot of meat, become pals with the butcher.” Well, if you want a good Cuban novel, read Cuban authors. Suarez has created a powerful novel about Cuba and its people, and the world he build is the one I know: a land with a repressive regime, yet with some of the best people you’ll ever meet, know, and love.