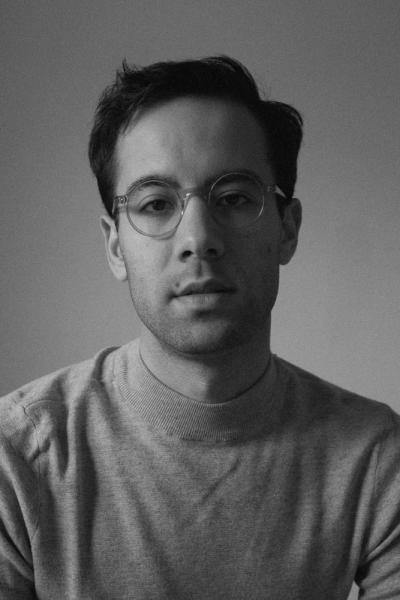 My therapist asks me why I think I always return to lack,
and it may or may not be related, but it's been on my mind,
so I finally tell him I might have been assaulted by my doctor.
—from "Poem with Starbucks and Kissing and Trees", Volume 62, Issue 2 (Summer 2021)

Tell us about one of the first pieces you wrote.
I received a very generous rejection at age 12 from an unnecessarily kind editor at The New Yorker who must have understood that he was responding to a child. I only remember that the story had something to do with my dad, a school bus, and a sunset. One of the first poems I wrote that I took seriously as an adult, however, was “Wet Dream,” which is about memory and beginning to embrace my sexuality—themes I still explore in my writing. I sat on the poem for years, but it was eventually published after much revision in The Shore.

What writer(s) or works have influenced the way you write now?
There are too many to name. I’ve gravitated toward certain poets at particular points in time, but I believe their influence has had cumulative, lasting effects. Some poets who have been significant to me include Bruce Snider, Mary Karr, Spencer Reece, Sylva Plath, Claudia Rankine, Richard Siken—I could keep going. I’m currently looking to Carl Phillips’s syntax and Louise Glück’s personae poems. The artworks of Georgia O’Keefe, Frida Kahlo, and Wolfgang Tillmans have also been influential.

What other professions have you worked in?
Before going back to school for my MFA, my professional experience ranged from food and bev to marketing. Some highlights include working for a chocolatier and doing photography full time. A comical low: crying in the bathroom when I should have been working the jewelry counter at Sears, which will no doubt be a chapter in my eventual memoir.

What did you want to be when you were young?
Besides being a writer, I wanted to be an auteur filmmaker. I went through that cliché phase when I thought I was going to be the next Jean-Luc Godard. Poetry is my main creative pursuit now, but the kid in me still dreams of making movies—though I’ve tempered my ambitions. Now all I want to make is the gay version of Sleepless in Seattle.

What inspired you to write this piece?
I wrote “Poem with Starbucks and Kissing and Trees” immediately after discussing an assault with my therapist for the first time. It was one of those rare instances when inspiration was present and demanding. The first and last lines had been floating around in my head for a while, but after that therapy session I felt like I knew what they were about. The poem kind of tracks my thought process in the hour between therapy and getting to the library where I drafted the poem. Though the first draft was by no means the final draft, I think the immediacy that prompted the poem has something to do with its stream of consciousness feel.

Is there a city or place, real or imagined, that influences your writing?
Charleston, SC. I moved there in 2017 and ended up getting my MFA at the College of Charleston. It’s a coastal city, and flowers bloom there year-round. A lot of my writing from the last few years draws on ocean/water imagery as well as the flora I’ve grown to love—passion flower, jasmine, wisteria, sundance, etc. I recently relocated to Pennsylvania where I’ll be a 2021-22 Stadler Fellow, and I’m excited to see how this new landscape factors into my writing!

Do you have any rituals or traditions that you do in order to write?
When I’m on my game, I’ll write first thing in the morning. I’m not one of those writers who wakes up before sunrise to work, but if I have an easy morning on the calendar, I let writing be my first priority for the day. I try to review sources of inspiration the night before, whether poetry, art, research, etc. I’ve found this gives these influences time to percolate overnight without being too overbearing in the moment of writing.

Who typically gets the first read of your work?
I’m fortunate to have a number of friends whom I trust as readers. One of my most faithful, trusted, and discerning readers, though, is my friend and fellow poet Rebecca Edgren. You can find her work in The Windhover, LETTERS, Fare Forward, and Whale Road Review. While you’re at it, look up Dakota Reed, Gardner Dorton, Katrina Smolinsky—god, the list could go on.

If you could work in another art form what would it be?
Photography. I have experience in commercial and freelance photography, and I’ve been trying to incorporate the medium more into my writing. Claudia Rankine and Diana Khoi Nguyen have been a huge source of inspiration for this, but also the textual photographs of artists like Carrie Mae Weems, John Baldessari, and Hal Fischer. I’m also really drawn to the work of Wolfgang Tillmans and Catherine Opie, and I love the idea of exploring conceptual portraiture.

What are you working on currently?
I suppose I’m in a somewhat liminal space of trying to determine whether I have a complete manuscript and feeling ready to begin a new one. The manuscript I’ve been working on is written mostly in a confessional and/or ekphrastic mode, and it deals with memory, faith, and sexuality. I’m also interested in beginning a new project that will hopefully explore love and eros through personae rooted in the operas of Puccini.

JOSHUA GARCIA lives and writes in Charleston, South Carolina, where he is pursuing an MFA in poetry at the College of Charleston and is an editorial assistant at Crazyhorse. His poetry has appeared or is forthcoming in Image, Hobart, The Shore, Homology Lit, and elsewhere.