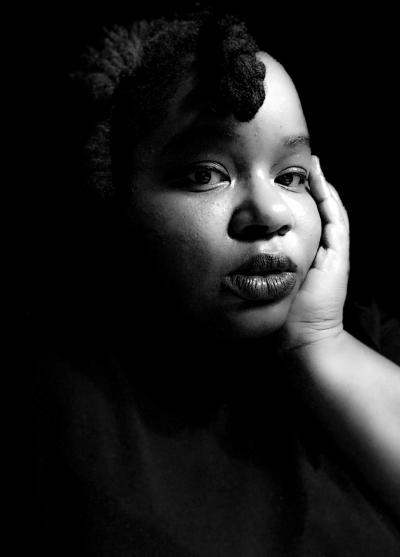 Tell us about one of the first pieces you wrote.
Ever? I think it was a poem about the moon. I was maybe 5 or 6 years old.

What writer(s) or works have influenced the way you write now?
Lucille Clifton, absolutely. The body of my grandmother’s unpublished poetry. Toni Morrison’s exacting and mythical language in Beloved for example.

What other professions have you worked in?
My first job was an administrative assistant for a non-profit dedicated to issues of Black infant mortality. It is purely coincidence that my writing would later be concerned with issues of medical care and Black folks. I truly thought I was done with that work and had initially thought of my job with Black Infant Health of California as a job that I was lucky to get right out of high school. Now, I have this book patient. that deals with these issues and I teach classes and give lectures about it. I suppose I am meant to think and do work around Black health.

What inspired you to write this piece?
I was falling for someone romantically during a very sad time in my life. In the background was this global rise of authoritarianism, the down-playing of real life threats to people of color in the increasing public defense of white nationalist rhetoric in the U.S. I was concerned that I just wanted to feel something better than the world out there rather than feeling something specific to the relationship. Concerned as if that concern made my feelings less real. What had I to lose?

Is there a city or place, real or imagined, that influences your writing?
Space. Truly. I am often thinking about the spinning of planets, around burning stars, different relationships of mass to gravity. How might life be if gravity pulled our bodies even closer to our earth, less? How would that shape our feelings? What we think matters?

Do you have any rituals or traditions that you do in order to write?
The ritual of preparing coffee or loose leaf tea helps me. I have gotten away with good writing sessions without it, but some of my best have involved that as precursor.

Who typically gets the first read of your work?
Depends on what it is. I have some good poet friends that will take a pass at my poetry, usually. I spread the love around there so as not to burden one person with all of this stuff. When it comes to prose, my mom is often first. My mom and sisterfriend/editor Teresa Leggard.

What are you working on currently?
I am finishing revisions to what the English Lit people would call “a book of criticism.” I don’t think of it that way. It is a book of largely expository propositional prose that makes arguments for some ideas I have about Black feminism, affect, and creative production.

What are you reading right now?
Jacqueline Jones Lamon’s What the Water Knows, Erica Hunt and Dawn Lundy Martin’s collection Letters to the Future, and Tafisha Edwards’ In the Belly of the Mirror.


BETTINA JUDD is an interdisciplinary writer, artist and performer whose research focus is on Black women’s creative production and our use of visual art, literature, and music to develop feminist thought. She has received fellowships from the Five Colleges, The Vermont Studio Center and the University of Maryland. Her poems and essays have appeared in Feminist Studies, Torch, Mythium, Meridians, and other journals and anthologies. Her collection of poems titled patient. which tackles the history of medical experimentation on and display of Black women won the Black Lawrence Press Hudson Book Prize and was released in November of 2014.