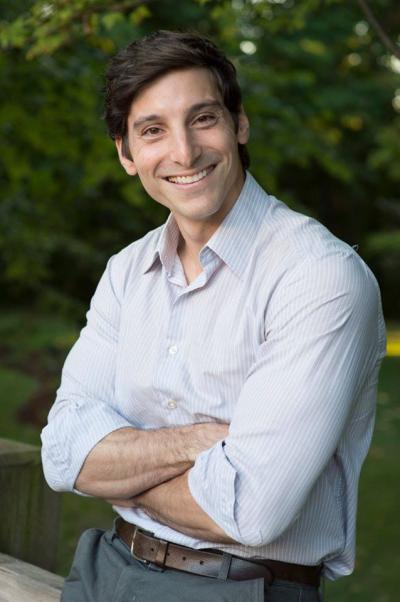 for Judy Garland's name
and your son's birthdays
to hourglass out
—from "Ever since Alzheimer's cut a hole in your pocket", Vol. 62, Issue 2 (Summer 2021)

Tell us about one of the first pieces you wrote.
I wrote a poem in middle school I called "My Dearest Dear," until recently still featured on what looked to be the first website ever made, in the voice of a mother watching her child grow up and out of his need for her. (I still remember these lines: "Your youth has faded to a speck so mere / In some distant land which is not clear / Within my heart, my dearest dear.") This was the only time I carried out Frost's dictum "No tears in the writer, no tears in the reader." And it worked: my mother cried when she read it. I don't think I've cried while composing a poem since. Is it possible for me to be a better poet now but have yet to write a better poem than that?

What writer(s) or works have influenced the way you write now?
Writers most important to me have been those who give me permission, who show me through language what I can get away with and be and do, who open up (flood)gates: Marianne Moore, Annie Dillard, Walt Whitman, James Baldwin.

What other professions have you worked in?
I was a fruit harvester at the Cornell Orchards for a 3-month stint between adjuncting—I'd nearly forgotten this!—during which I ate more fruit than all my days combined (pawpaws, kiwi berries, 4 apples a day on average, etc.), woke up with the sun, and one time held a small pile of pinkies that my co-picker had put into my palm as she ran to get a bag to bring them home for her snake. Imagine my hands. They’d led an uncalloused suburban life protected from such sights. If poems, like Lucille Clifton says, are meant to "comfort the afflicted and afflict the comfortable," I was deep in a poem that day, and many after.

What did you want to be when you were young?
I wanted to be a bull, I think because of how the thickness of the word enacted the creature so well. This was among the first indications that language was my medium. "Yak" and "oxen" for those same barrel-chested reasons; "azalea" and "dough" for different ones.

What inspired you to write this piece?
Because there is artistic possibility—there has to be—in the absurd erasure Alzheimer’s is waging against my father. Because I wanted to aim for a patience and a grace on the page that is so hard to come by in my life. I wanted to record my father's quickening losses, knowing that if I didn't then his losses would leave me as well. To preserve a present moment that to my father must feel constantly past-tense-ing. Because a poet rescues the dead, or in this case the near-dead, from oblivion (Martín Espada).

Do you have any rituals or traditions that you do in order to write?
Here’s a ritual I aspire to: to eliminate my sense of self when I sit down to write, to shed all awareness of time or hunger or the oppressive Google calendar. Behind the lifted paywall I read Derek Walcott's Paris Review interview recently, in which he describes "a retreat, a withdrawal into some kind of silence that cuts out everything around you. What you’re taking on is really not a renewal of your identity but actually a renewal of your anonymity, so that what’s in front of you becomes more important than what you are." I am often acutely aware of my own presence in the room as I write and this feels like a failure of the kind of ritual I want to (dis)embody. I want the paywall kept up on my self; I want to be blocked from it at the moment of writing about it—a paradox I have yet to crack. It occurs to me that I don't get "lost" in books, despite my love of reading. I feel perpetually found, my consciousness kept under a spotlight of my own making. Perhaps I'll grow into this "melting" of the I, instead of how most poets, according to Walcott, grow out of it. Maybe its arrival in my life will be sweet and at the exact moment I need it.

If you could work in another art form what would it be?
Singing. I was a tenor 2 in a college a cappella group, degenerately flat; no amount of eyebrow-raising could lift my voice out of it. Singing has always felt like a pair of frightened hands playing a trombone, sliding back and forth with a kind of abandon and hope but no real discipline. I want to belt a note and hit it square, no waver, all diaphragmatic power. This seems to me a gift I was only given pieces of, with no batteries or assembly instructions included.

Is there any specific music that aids you through the writing or editing process?
It has always been silence. Though perhaps music could help melt that aforementioned “I.”

What are you reading right now?
I'm always several seasons behind. On my desk is Ellen Bryant Voigt’s Messenger, Solmaz Sharif’s Look, and Gregory Orr’s Poetry as Survival, 15 years after being assigned it in his undergrad workshop.

What are you working on currently?
I'm currently working on "translations" of my father's Alzheimer's-addled voice messages on my phone. Undergirding this project is the conviction that there is some sense beneath his words, that his life is a fading text, and that my role is to recover what's on the verge of being lost.


ALEX CHERTOK'S poems have appeared in the Kenyon Review, The Missouri Review, The Cincinatti Review, Copper Nickel, and Best New Poets 2016, among others; his writing on prison teaching has appeared in Ploughshares and is forthcoming in Alaska Quarterly Review. He was runner-up in North American Review 2019 and a 2021 James Hearst Poetry Prize finalist, as well as finalist in the 2020 Third Coast Poetry Contest. He teaches at Ithaca College and the Cornell Prison Education Program.