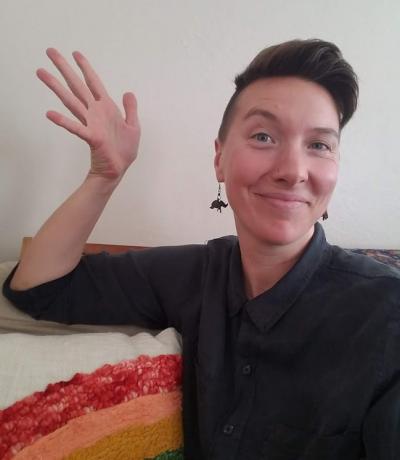 Tell us about one of the first pieces you wrote.
In fifth grade I wrote what I now call a feminist version of Pete’s Dragon in verse: A character called Rose befriends a little girl who is going through challenging times and needs a friend. The girl is the narrator and tells of how Rose had to leave to help someone else. I still have the paper.

What writer(s) or works have influenced the way you write now?
I believe where we are and how we write—at any point—is a layering effect of the past, but recently? I’ve been recently heavily influenced by Anne Carson—her play, Norma Jean Baker of Troy, and “The Glass Essay,” and also the collaborative publication “Forest” by Forrest Gander and Katie Holten. There is so much good work I’ve read lately, but I’ve spent the longest with these, Carson’s work for its ability to both interact with other texts and, in case of “The Glass Essay,” integrate a personal thread. “Forest” is a meditation and manifesto—both of which I need right now.

If we are thinking lineage for this poem in particular, however, at the time I wrote “Spermaceti” I was reading a lot of Camille Dungy, Brenda Hillman, and Moby Dick, but I finished the poem having read Donika Kelly’s Beastiary and Mary Szybist’s Incarnadine for the umpteenth time.

What other professions have you worked in?
My first job was at a fancy local grocery store whose fruit displays I loved so much my high school best friend and I would walk their aisles during lunch. I wanted a job there, surrounded by beautiful food, because I believed if my plans fell through with wanting to be an English prof and I needed a backup plan I could always go back to food and still be happy.

In order of appearance: I have worked as a courtesy clerk, cake decorator, barista, juice bar team lead, maintenance worker, theology TA, biology TA, baker, chocolatier, community writing workshop facilitator, English adjunct for a faith-based university where I had to quit when I came out because they were anti-gay, prep cook when no one would hire me and I remembered I liked food, a baker again at my first job’s grocery store warehouse kitchen because the grocery store where I had my first job had grown into a local chain, and now I am teaching as a graduate student at UC Davis.

What inspired you to write this piece?
This poem is one in a series of whale-oriented poems that coincide with a series of bone-oriented poems. I was obsessed with bones and whales for a long while, but I was especially bothered and interested in the historic figure of the whaler—the kind of man who would leave the comfort of land to do really hard work on the ocean for months, risk death for a little money, for adventure. The poem took years to settle, and only did when I realized that, for this poem, the interesting crux is the implication of the speaker.

The summer I fell hard from afar for a woman living in New England I was still writing about whales, and that corner of the world made a little rise in influence for a short time—which is another peek into how this poem came to be.

Is there any specific music that aids you through the writing or editing process?
I listen to songs on repeat. I’ve listened to Brandi Carlisle’s “The Eye” for six hours while editing poems. I’ve done the same with Beethoven’s “Moonlight Sonata,” Beatrice Eli’s “Girls,” and quite a few by Hayley Kioko and Lizzo, and I spent a week in the Temecula Mountains listening on long repeat to the full live performance of Jose Gonzalez and String Theory while writing and revising the last of the whale poems.

Who typically gets the first read of your work?
My girlfriend. She is not a poet, but she knows me and can recognize when something exciting is possible beyond the mess of an early draft.

I also have a small group of writers I’ve met with at regular and irregular intervals. We’re to the point where they will see potential where I cannot see it—and prod at soft spots from an angle I’d never consider. They’re likewise first readers and invaluable critics and cheerleaders.

If you could work in another art form what would it be?
I was a visual artist—mostly painting and charcoal—until my mid-twenties, when words on page took over, but my body has always liked to move—so dance or visual art are a close tie.

What are you working on currently?
I just moved to a new town ten miles away from where my extended family has lived for decades—from where I grew up, moved away from, moved back out of convenience and need. I just moved to a house on the furthest edge of town from my old town, and there are planter boxes and a little patio with plants. There is an evening Delta breeze. There are tall trees where a hawk likes to perch and cry at the day. So I’m looking around, writing a lot about California, writing a lot about aftermath, dirt and landscape and place. It’s a different cosmos than that which “Spermaceti” inhabits—all seascape and guilt, the times and places that come just before speech. You could say I’m working on poems that are about the opposite—land-based, what life looks like after, when things are utterly different, but good.

What are you reading right now?
I just picked up Toward the Open Field, edited by Melissa Kwasney—a collection of poets writing about poetry from 1800-1950. Primarily men, primarily white—readings I have more or less ignored because of those two descriptors. The excerpts are wonderful though, and the historical glance helpful.

In actual poetry land, I am trekking small stretches of multiple trails all at once: Donika Kelly’s The Renunciations, Victoria Chang’s Obit, Rigoberto González’s The Book of Ruin, Juliana Spahr’s Well Then There Now, Jorie Graham’s Materialism, and Taylor Johnson’s Inheritance. They are all different and inspiring and needed for different reasons. And it’s summer, so my reading list is as long as my leg.

AMANDA HAWKINS is a Tin House and Bread Loaf Scholar, a three-time Pushcart nominee, and a recipient of the Editor’s Prize for Poetry at The Florida Review. Her work can be found in Boston Review, The Cincinnati Review, Mid-American Review, Orion, Terrain, and Tin House. She holds an MA in theological studies from Regent College in Vancouver, Canada, and is currently an MFA candidate at UC Davis.