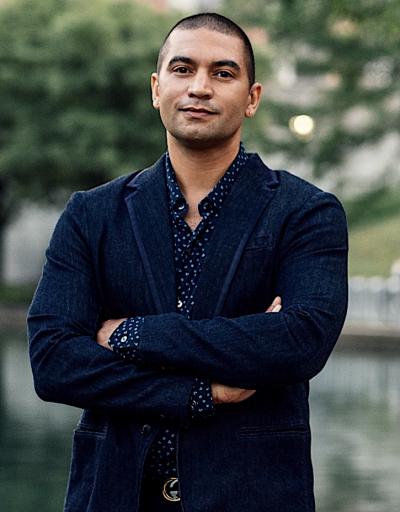 Slowest-footed day of the week,
wrong noted & creaking on
the credenza while the other

Tell us about one of the first pieces you wrote.
The first time I wrote a poem was in March 1994. I remember it so vividly because I was in Bloomington, Indiana walking across a field near campus. I was listening to Miles Davis’s version of “Footprints” and for just a moment, I thought I understood his language of trumpets. I got my notebook out and wrote a draft of a poem called “Miles Runs the Voodoo Down” that ended up in my first book 9 years later. That’s one of the beautiful things about first books (and all books, really). They hold so many revelatory walks, open fields, and realizations even though others might not recognize them.

What writer(s) or works have influenced the way you write now?
To keep this from being the longest response ever, I’m just going to name one of the first ones since his work has informed everything I’ve written including the poem I mentioned in my last answer: Yusef Komunyakaa.

He was the first published poet I met, the first poet I heard read, and has been different kinds of inspiration for me over the past 25 years. I don’t know of any other poet with his combination of imagistic imaginary and lyric brilliance Every one of his poems sings full-throatedly. Everybody should read his work and Neon Vernacular is a great place to start. He’s also got a new and selected coming out later this year called Everyday Mojo Songs of Earth. See what I mean? His titles are better than most people’s poems.

What other professions have you worked in?
I’ve kept a job since I was 13, so I’ve done a lot of different things. I’ve worked as a grocery store clerk. I’ve been a carpenter’s apprentice, bartender, golf caddy, and radio DJ. I was sandwich artist for a minute, a dish washer, ticket taker a beach, and a drive through concierge. The last job I had before becoming a teacher was working at Amazon.com. This was back in 1996 when it was brand new and only sold books. I was there for 2.5 years. There were 45 employees when I started and 2000+ when I left if that gives you an idea of how quickly that company exploded.

What did you want to be when you were young?
This is going to sound like I’m clowning, but I promise I’m not: I wanted to be a time traveler like the kid in Time Bandits. Once I realized that wasn’t going to happen, I wanted to be a rapper which might have had even less of a chance of success than time travel. I never had the right kind of bravado or vibrato to be an emcee. Or a time traveler for that matter.

What inspired you to write this piece?
I’ve got an irrationally antagonistic relationship with Tuesdays. It’s always been my least favorite day of the week, mostly for circumstantial reasons. As examples:

· I saw the movie Poltergeist on a Tuesday in 1983. For the next year, Tuesdays reminded me of the movie and I’d get scared all over again.

· A while back, I had to go sit in a five-hour, state-mandated divorce class and it was only offered on Tuesdays.

· Tuesday is hardly ever a holiday even when it supposed to be one.

None of these things are Tuesday’s fault but I still can’t get past it in the habit of poets. “Tuesday Feeling” is in honor of that and also Blood Orange’s song.

Is there a city or place, real or imagined, that influences your writing?
There’s not a specific city, but wherever I’m standing influences the way I’m thinking/feeling and by proxy influences my writing as well. I’m just starting to come to terms with how place and imagined geography affect my work. The way poems render differently because of the sounds and smells of a place, I mean. It’s taken me a long time to get out of the nation of my own head and think about the world around me actively.

Is there any specific music that aids you through the writing or editing process?
I love making playlists. I’ve got playlists for individual poems, playlists for books, playlists for cooking, slow jams playlists—little soundtracks for whatever I’m doing. Here’s part of the soundtrack for the book “Tuesday Feeling” is in, Somebody Else Sold the World:

The Somebody Else playlist goes on like that for 2 hours or so, which is usually enough time to revise a poem. 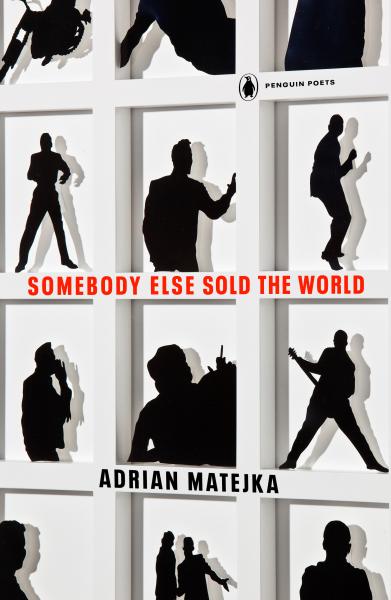 I don’t really share my work with anyone outside of the house until I think I might have a book manuscript. But at that point, there are trusted friends I reach out to for advice.

Shara McCallum and Sean Singer have read every book I’ve published before anyone else. My friend and mentor Jon Tribble (who died in 2019) saved me from my most frivolous impulses in everything. Erin Belieu, Gabrielle Calvocoressi, Oliver de la Paz, Ross Gay, Allison Joseph, Marc McKee, and Aimee Nezhukumatathil are some of the other people who have read my work over the years and I know I’m better because of their insights.

I just realized this looks like an acknowledgments page and I guess it is. It speaks to the fact none of us do the work we do completely isolated in an attic.

What are you working on currently?
Somebody Else Sold the World drops in July. I wrote almost all of it between March and October 2020. An art and poetry project inspired by Funkadelic I made in collaboration with artists Nicholas Galanin and Kevin Neireiter called Standing on the Verge & Maggot Brain will be out in the world in August.

I’m sharing these titles because I’m about to take a poetry break to focus on finishing a graphic novel I’ve been writing with artist Youssef Daoudi called Last On His Feet. The graphic is about the boxer Jack Johnson and picks up where (or maybe overlaps with) my book The Big Smoke ended. Youssef and I have been working on this for a while and it will finally be out fall 2022.

What are you reading right now?
I have a reading pile next to my desk and I just grab books to read/reread from it. The stack right now: Carey Salerno’s Tributary, Kendra DeColo’s I Am Not Trying to Hide My Hungers From the World, Taylor Johnson’s Inheritance, Jason Reynold’s Long Way Down, A Little Devil in America by Hanif Abdurraqib, and a volume of short stories by John Edgar Wideman edited by Walton Muyumba called Love Made Me Love You. I can see The Selected Works of Audre Lorde that Roxane Gay edited in the next stack along with a fun volume of interviews with poets called Small Orange Conversations with Poets. Every one of these books is full of the good kind of surprises.

ADRIAN MATEJKA is the author of six books, most recently a mixed media collection inspired by Funkadelic, Standing on the Verge & Maggot Brain (Third Man Books, 2021), and a collection of poems Somebody Else Sold the World (Penguin, 2021). His first graphic novel Last On His Feet will be published by Liveright in 2022. He lives in Indianapolis, Indiana.