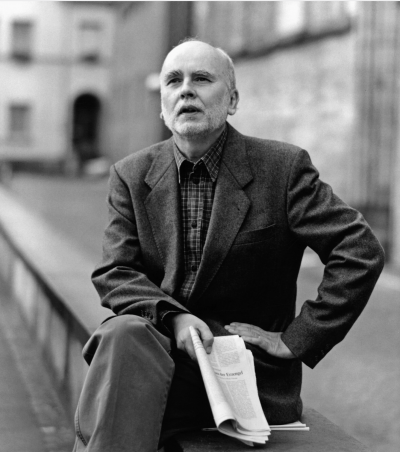 Adam Zagajewski, the great Polish poet and essayist, who died on March 21, wasn’t aloof, as some tried to paint him, especially in Poland, where he had many detractors in the poetry world; he was kind and generous with his time and advice. Was he as erudite as he appears in photographs? Or as his writings, which span the full gamut of so-called high culture, suggest? Absolutely. However, he was also genuinely curious about other people and their pursuits. Having cut his teeth as a writer and intellectual in Communist Poland, he fought falsehoods, especially of the political sort, with truth until the very end, penning poems and articles that criticized the current right-wing government in Warsaw. He loved listening to classical music (Mahler, Schumann) and to blackbirds. In summers he swam in the sea and wrote at least one poem about it. At home in Polish, English, German, and French, he was beloved on both sides of the Atlantic, and invited us, his readers, through his soft-spoken and precise poems, to travel along with him deep into the human interior, in search of an emotional and spiritual uplift that could serve as a reprieve from our pedestrian reality.

The last time I saw Adam, in June of 2019, he invited me into his study. I remember that, among other things, we talked about Czesław Miłosz—earlier that day I had made a stupid comment about the Nobelist at a public event and Adam had already heard of it—and about how hard he had worked to promote Polish poetry in the U.S. We also talked about our city, Kraków, which I had felt at different times either slipping away from me or renewing its grip on the very core of my being. Cities were important to Adam—Gliwice of his youth, Kraków, where he arrived as a college freshman, Paris, where he followed the love of his life, Maja Wodecka, and stayed for twenty years, Houston, where he taught creative writing one semester each year for just as long, and of course Lwów, the mythical place and an open wound of his parents’s generation, which he left as a baby when his family, along with thousands of other Poles, was expelled by the Soviets. During our chat, his wife brought in fresh strawberries. Then he showed me a small garden out back, which Maja started and tended.

We had met for the first time ten years before in—of all places—Philadelphia. I was living with my wife in Delaware at the time, having decided to leave San Diego to see what “the rest of the country is like.” One day I learned that Adam was coming to speak at Villanova University, and did something I wouldn’t dare to do today: I wrote to Blue Flower Arts, the literary speakers agency, and asked if I could pick Adam up at the train station and bring him to campus. Adam and I had corresponded earlier (he wrote a foreword to my first book of translations—of poems by Julian Kornhauser, his friend and erstwhile brother in arms), so he had an idea who I was, but still… To my surprise, all the involved parties agreed. I waited for him in the main hall of Union Station, nervously checking the arrivals board to make sure we wouldn’t miss each other. Then there he was, riding up on the escalator with a wheeled carry-on. The small suitcase made him look human rather than like some god, which is how I’d imagined him, emerging from the underworld. I opened the door of my Forester for him. During the drive to Villanova, we talked about his ongoing reading tour, Polish poetry, and me, for he was very interested in how I, born and raised in Kraków, ended up an immigrant in the States.

Needless to say, I had met him—through his writings—many years earlier. In fact, when I started writing my first, very awkward poems, oscillating, as he put it in one of his poems, between “frailties” and “occasional inspired moments,” it was Adam’s work more than anybody else’s that guided me. This was before the Internet and efficient airmail, and living in California I had no choice but to read him, just as I read Miłosz, Herbert and Szymborska, in translation. For some reason I was deeply ashamed of it. Perhaps I tried too hard to figure out where I belonged as a poet and felt that my poetic education wasn’t authentic enough?

My anxiety about it all spurred me into action, and I searched for bilingual editions of the Polish poets as if they were panacea, in no time becoming acquainted with various libraries and the legendary, and sorely missed, Szwede Slavic Books store in Redwood City. Despite reading Adam’s poems in translation, I found in them perfect models for the kind of work I wanted to write and in him the kind of poet I wished to become, which, contrary to what one might think, isn’t one and the same. Adam wrote all different sorts of poems—expansive meditations and short lyrics, poems about people, the arts, and the fleeting moments that make up our day-to-day existence—but above all I saw in him a poet and intellectual with a sense of purpose, someone who wrote about things that mattered, though I didn’t quite know yet what that meant. He embodied a perfect ratio of praise to doubt: I wanted to be like him.

We would meet many more times after that day at Villanova. During my annual visits to Kraków, I never expected that he’d find the time for me, but he always did. On our second or third meeting, over fresh-squeezed lemonade, he proposed we drop the formalities and call each other by our first names. At first, I was shy about calling him Adam rather than “pan,” the Polish equivalent of “sir,” but there was something warm and disarming about the way he made me feel. I also interpreted his gesture as a vote of confidence in me as a poet and, most importantly, as a person. The standing of his work is secure, and so it is that combination—his genuine smile and piercing, attentive gaze, punctuated by occasional laughter and carefully chosen words—that I will miss dearly.

I last heard from him on February 6th, when he wrote to apologize for being slow to respond to my previous email. He enclosed a new poem. Said he’d write more soon.

Piotr Florczyk's newest collection of poetry, From the Annals of Kraków, which is based on the testimonies of Holocaust survivors, was published last year.