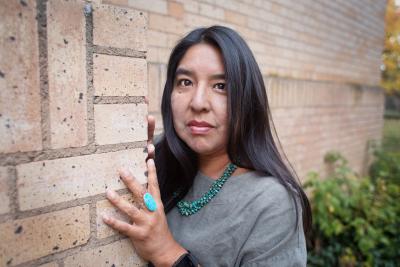 Tell us about one of the first pieces you wrote.
I took a creative writing class in high school. I wrote a poem about my father. It was a short image poem. My teacher was impressed. She entered it in a contest. I did not win the contest but I did receive recognition. I did not think much about creative writing at the time but it was a special feat for me because the poem honored my father.

What other professions have you worked in?
I am a licensed Addictions Counselor and have worked in a residential treatment center. I am a printmaker and enjoy mixed media collage. I make jewelry using found natural elements like shells, seeds, and felted wool, combining the natural elements with trade beads and faceted crystal beads.

What did you want to be when you were young?
A cardiologist; an idea I got from a tv show.

What inspired you to write this piece?
This piece is written using Diné bizaad (Navajo language) with a short melody in English. The sonnet was inspired by sonnets written by Terrance Hayes and translates to "Hosteen eats mutton." The Navajo people are known for shepherding and their ability to butcher sheep. The main body of the poem is written to emphasize the linguistics of Diné bizaad – its music, rhythm, sound, repetition and the sacred. The poem plays on the romanticized elements associated with Native Americans. The form and repetition are intentional to enhance a songlike quality and when translated, it interrogates how we associate with race and otherness.

Is there a city or place, real or imagined, that influences your writing?
I consider LA and Diné bikéyah as my homelands; they both influence my choices on how I construct my literary landscape. 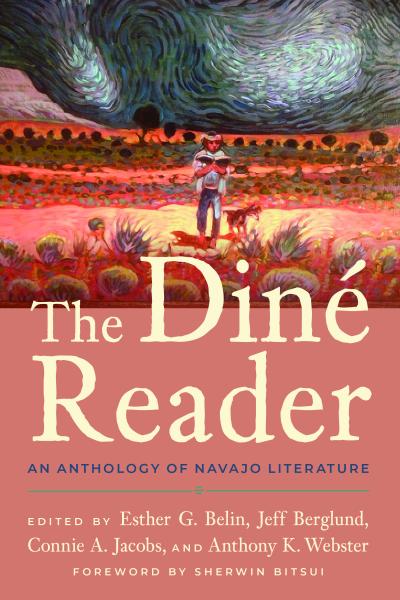 I like to a have a mug of tea, a few books, a notepad and pen with natural elements around me. I generally start off in silence soaking in the landscape that I am in.

If you could work in another art form what would it be?
I would like to do more art installations and collaborations with other visual artists.

What are you working on currently?
I just finished editing an anthology of Navajo poetry with three other editors. The book, The Diné Reader: An Anthology of Navajo Literature, will be out in Spring 2021 from the University of Arizona Press. I just finished some poems for a zine, Pandemic Chronicles, Volume 1, online at the Art Journal Open website.

ESTHER G. BELIN is a Diné multimedia artist and writer, currently a faculty mentor in the low-rez MFA program at the Institute for American Indian Arts. She holds degrees from the University of California, Berkeley, the Institute of American Indian Arts, and Antioch University, Los Angeles. Her poetry collection From the Belly of My Beauty (University of Arizona Press, 1999) won the American Book Award from the Before Columbus Foundation. Her latest collection is Of Cartography: Poems (University of Arizona Press, 2017). She is a second-generation off-reservation Native American resulting from the U.S. federal Indian policies of termination and relocation. Her art and writing reflect the historical trauma from those policies as well as the philosophy of Saah Naagháí Bik’eh Hózho, the worldview of the Navajo people.