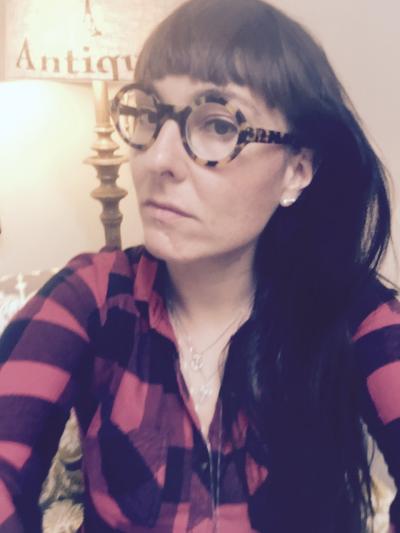 He turned to her. He was sitting on the couch in the living room, that same sinking couch that had belonged to his parents, as had the house. She was in the kitchen making something to eat. They had been out late the night before, and had woken up only an hour ago. Jim felt horrible. Cecilia, on the other hand, never seemed hung-over. Even when she drank, and she could drfink most women, and some men, under the table, she always seemed in control.
—from "Cecilia," Volume 61, Issue 4 (Winter 2020)

Tell us about one of the first pieces you wrote.
How far back do you want to go? I think the first story I wrote was in eighth grade and it was a Stephen King style story that ended in “ahhhhh!” But then, when I got a bit more serious in grad school, I think he was still an influence—as I was verging into realism, and there was still a murderous aspect to that story too. Ironically, I’ve come back around, and though I have written in the genres of realism and/or postmodern (aka literary) My latest work is far more speculative.

What writer(s) or works have influenced the way you write now?
That’s a really difficult question, because there are writers that you love and writers that actually impact the way you write, and it’s weird to disentangle the two. Let me just say that the writers I’m inspired by are the folks in the contemporary new wave of Native fiction, like: Brandon Hobson, Kelli Jo Ford, David Heska Wanbli Weiden, Rebecca Roanhorse, Daniel H. Wilson, and Tommy Orange—but the biggest influence on my head, in terms of the latest novel, has absolutely been Silvia Moreno-Garcia with Mexican Gothic. And honestly a good amount of Black speculative television like Lovecraft Country and Watchmen.

What other professions have you worked in?
I haven’t ever worked in other professions per se—though I’ve had lots of jobs that would easily fit under the umbrella of manual labor. Even if soft manual labor, as I’ve worked in donut shops and I’ve worked at a Starbucks and I’ve worked selling train paraphernalia. And, I wish I could say that all this ended when I finally got a tenure-track job at 30, but no—my debt to income ratio was such that I often had to work these jobs in the summer for a number of years. But otherwise, it’s just been academia—though I’ve been hoping to merge into screenwriting.

What inspired you to write this piece?
You know, “Cecilia” is a short story that has been with me for a long time, it’s kind of been my favorite baby for years and years—and it’s now blossomed into a Speculative novel. It was part of a short story collection that never sold, and it was the one story I held onto for a long time. I was inspired by people that I grew up with, and the ways in which being Native for them doesn’t conform to what people expect—even Indians sometimes. These are small town Indians that aren’t from reservations, who grew up with other small town Indians, and they’re neither assimilated nor traditional—Dinébizaad, Lakota and sometimes even sometimes Anishinaabemowin are spoken here and there—and so is Spanish, even if the primary is English. And some people are evangelical, and some people are Native American Church, and some people do powwow—and the primary demographic is working class whites. And enrollement isn’t even part of the discussion, though I certainly encountered my fair share of Genorokees growing up. But that’s just the setting—what I was really interested in, was what happens to someone who has such deep, buried pain, that they will do anything to escape from it—sabotage a good relationship, even run away from their own child, even though they’re drawn to people who exhibit the same pain— forcing them to go through that process again and again.

Is there any specific music that aids you through the writing or editing process?
This is another weird question, because there’s lots of music that influences me. For example, in my current novel, my main character (Kari) loves Megadeth and loves heavy-metal, so that influenced me heavily. But though I’ve come to love Megadeth, and it’s kind of neat because that was everywhere when I was growing up, I was always a Pearl Jam and Nirvana guy (though hip-hop has always been big for me too—I love Mos Def and Outcast). But I can’t listen to that while I’m writing, because the lyrics intervene. So I listen to a lot of music without lyrics when I write. And I really do need often to listen to it, to keep going.

Do you have any rituals or traditions that you do in order to write?
That’s really evolved over time. Though I’ve always written at a desk at turns, I used to write a lot at coffee shops. But now my office is the place that I go. I think in part that’s because, for a long time, I lived almost completely in an incredibly small town, with one or maybe two small coffee shops, and you didn’t go in there to work, you went in there to socialize— because inevitably there was someone in there that you knew. But recently, I bought the kind of big desktop that I haven’t had in perhaps decades, because even pre-pandemic, though I was still traveling for writing, things were slowing down in other ways for me in terms of travel for work. So, I’m more at my desk than ever (and especially now, during zoom-event life). So, though I can write on the run, my favorite ritual has become getting up and drinking coffee— maybe reading a few paragraphs of a craft book, and then a book I’m reviewing perhaps—and then trying to go right to the writing in the morning before the rest of the day’s tasks crash down on me.

Who typically gets the first read of your work?
You know, early in my life I didn’t have a lot of what you would call beta readers. And I think they’re valuable not just because they can help you critique a manuscript, but they can say, you know what?—you need to go back to basics on this one thing. I needed to go back to the basics when it came to structure. I bought that whole academic/literary line hook, line and sinker—the one that states that you shouldn’t have to worry about structure if you’re a good writer, because structure is for Hollywood. Bullshit. Now my boyfriend and actually my friend Bob Johnson, a phenomenal writer I met at the Kenyon Review Workshop, are my first readers, because they care about language and character—but they are really sharp with form. They will tell me, this thing just doesn’t hang together until the last third, or what is the purpose of this chapter? And I need/ed that. I have a couple other friends who are willing to read but like me, they’re just so busy that sometimes by the time they’re able to get to things, I’ve had to move on. But it doesn’t mean I’m not still grateful for that. 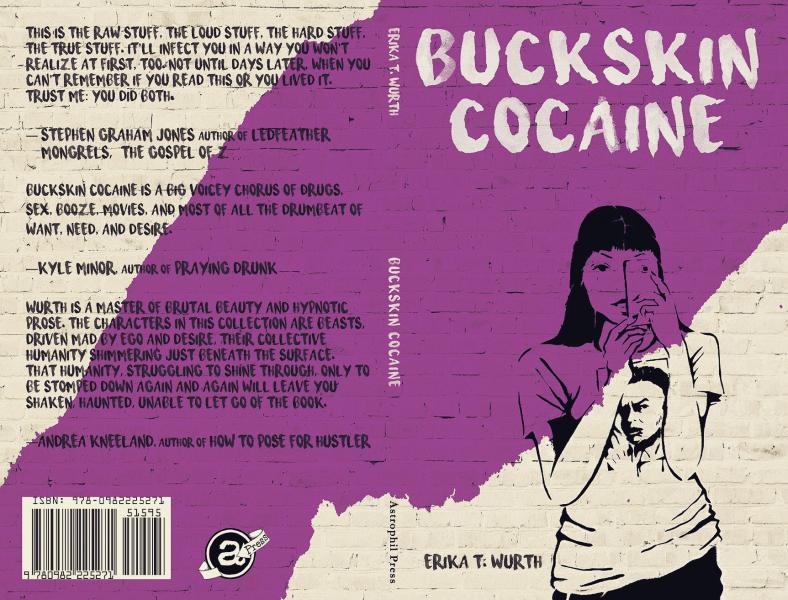 Sometimes I dream of not being an artist at all. Usually when I’m riding the train back-and-forth from Chicago to Macomb Illinois where I teach—I still go back sometimes (long story). Something about the little houses stacked amongst the fields of corn and soybean make me think about how nice it would be to read a book and not review it, and go to a job, and not care that much about it, and then go home and watch TV and smoke a cigarette (because I quit smoking so that’s part of this fantasy), and go to bed and not wake up wondering which agent I’ve queried has rejected me now. But that’s not my fate, I guess. I think my answer is a really bad one in a number of ways, but the other way in which it’s bad is that if I could work in another art form, like I said, it would be screenplay, and the graphic novel, comics in general. So still writing—but different writing?

What are you working on currently?
As I mentioned, it’s a Speculative novel. That element really wasn’t there until the later drafts, and then it became a much bigger factor. When I was a kid, all I read was Speculative literature, or so it’s called now; fantasy and science-fiction and horror—and it wasn’t until college that I started reading realism/postmodern fiction, a.k.a. literary. And then I read and wrote in literary for years, and have come back around. In any case, the novel is about a woman—Kari—who has always hated her mother for abandoning her when she was two days old. But then a bracelet surfaces, and when Kari touches it, she is given a shocking vision of her mother’s past, and that’s when her mother starts to haunt her, quite literally—and she goes on a journey to find out what happened to her. This character is Cecilia’s daughter, the main character in the story that you took. The novel, White Horse, is also a bit of a love song to Denver, and to heavy-metal.

What are you reading right now?
I’m reading Rebecca Roanhorse’s Black Sun. I think what she’s doing is so adjacent to traditional Native American literature, because her work lives in a place where survival is essentially a given. I’m not saying she doesn’t address genocide, because she does. But she assumes that Native people are not the sum total of their genocide, and she explorers what it would look like if the worlds that we lived in were almost alternative worlds, where our languages, and our traditions, and our spirituality are the norm. And I think that aspect of Speculative literature is so incredibly important for our spirits. I think it’s been missing from Native literature. What’s interesting, is that when I was writing those Fourth Wave articles, I anticipated the next wave to be one in which it was still written in the genre of realism and/or post-modernis. But what I couldn’t see at the time, was that Speculative and crime literature pushes Native American literature to a place where it can’t be categorized in the way that it’s been categorized before, where we always end up a fetish object through our art. Our authenticity shouldn’t be the point, nor our ability to translate all of Native culture to non-natives (as Treuer has pointed out, time and time again). The art should be the point. The art is the point in Roanhorse’s work. And if you’ll forgive me for saying so, in my boyfriend’s novel Winter Counts.

ERIKA T. WURTH’s publications include two novels, Crazy Horse’s Girlfriend and You Who Enter Here, two collections of poetry, and a collection of short stories, Buckskin Cocaine. A writer of fiction, nonfiction, and poetry, she teaches creative writing at Western Illinois University and has been a guest writer at the Institute of American Indian Arts. Her work has appeared or is forthcoming in numerous journals including Buzzfeed, Boulevard, Lithub, The Writer’s Chronicle, Bitch, Waxwing and The Kenyon Review. She will be faculty at Breadloaf in 2021, is a Kenyon Review Writers Workshop Scholar, attended the Tin House Summer Workshop, and has been chosen as a narrative artist for the Meow Wolf Denver installation. She is Apache/Chickasaw/Cherokee and was raised outside of Denver, where she lives with her partner, her two stepchildren, and her extremely fluffy dogs.