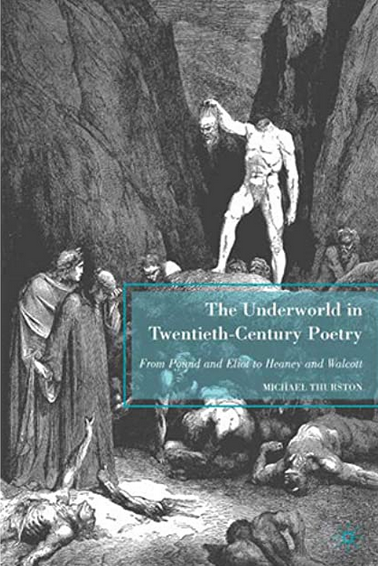 (Photo: Michael Thurston, The Underworld in Twentieth-Century Poetry. From Pound and Eliot to Heaney and Walcott. Palgrave, 2009)

“the triumphant cheers of the lost souls”

Circles and cycles, accidents and underworlds, elections and mandates and slight tardiness. All of these shape the fourteenth section of Autumn Journal, as MacNeice reports on an electorally driven descent into the Oxonian inferno, a descent that, in epic terms, is a couple of episodes late (Odysseus recounts his nekuia in Book XI of the Odyssey, Aeneas undertakes his katabasis in the Aeneid’s sixth book, and both of these are at the halfway points of their narratives).

The by-election for the Oxford seat in the House of Commons in October, 1938, was the first electoral test of public judgment regarding the Munich Agreement. The Conservative candidate, representing the Government and support for the agreement, was Quintin Hogg. Against him stood A.D. Lindsay, the Master of Oxford’s Balliol College, who ran as a non-party candidate, hoping to gather support from anti-Munich Agreement voters across the party spectrum. MacNeice’s friend and mentor, E.R. Dodds, was heavily involved in Lindsay’s campaign and Dodds persuaded MacNeice to drive to Oxford on election day (October 27) to drive Lindsay voters to the polls.

Circles and cycles. I mentioned when I began this blog series that I return to Autumn Journal annually. On some of those occasions, I have also written on the poem, and here I must confess that I’m not only cycling back to the poem but also recycling earlier writing of my own. Doing so seems fitting when writing about a section of the poem that returns to imagery of its opening—a journey past lives that MacNeice briefly imagines on the basis of décor—and rehearses the topos of the Underworld descent introduced in the first section. The image of circularity itself, imagery that MacNeice develops insistently in this section’s first twenty lines, also invites this recycling (or so I’m going to allow myself to believe).

Driving by night, MacNeice takes the “North Circular” road, his wheels whishing on the wet pavement. He passes “shining semi-circles of petrol pumps.” The road “swings round . . . like a lassoo [sic] / Looping wider and wider.” As he leaves towns behind and drives deeper into the country, he finds it to be “damp and dark and evil.” Finally

. . . coming over the Chilterns the dead leaves leap
Charging the windscreen like a barrage of angry
Birds as I take the steep
Plunge to Henley or Hades.
And at the curves of the road . . .
. . . the hedge solicits
My irresponsible tyres
To an accident, to a bed in the wet grasses.

Notice the dead leaves that echo MacNeice’s premonition in section I, the “curves” that continue the circular theme, the plunge into darker depths and ultimately off the road entirely. In the middle of the road of his life, MacNeice comes to himself in the darkness. The scene is set for revelation.

He makes it to Oxford in spite of all of this and puts in his day driving voters to the polls. We have encountered in several earlier sections the poet’s skepticism about the efficacy of such activity, and even now he recognizes that he acts “for a half-believed-in / Principle.” Nevertheless, he casts his disappointment and disgust at the electoral result in terms of the inferno that he has constructed for himself. At the end of the day, “the streets resounded / To the triumphant cheers of the lost souls— / the profiteers, the dunderheads, the smarties.” Supporting Hogg, the Chamberlain government, and Munich, the majority of Oxford voters have at least momentarily turned the city into what is, from MacNeice’s point of view, a Hell of souls lost in their own self-interest, ignorance, or calculation. “Profiteers” interestingly echoes Ezra Pound’s vicious portrait of London as Hell in his Canto XIV, but the force of MacNeice’s cultural criticism is aimed at targets different from Pound’s. Ashamed of his own earlier fear for his skin (remember section VIII: “Save my skin and damn my conscience”), MacNeice castigates those who share that aspect of himself as well as those who do not realize what he has come to realize: that at this historical moment, even the skeptics like himself, even “the nicest people in England,” those predisposed against “solidarity and alignment,” must come together. In the face of Nazism and Fascist expansionism, “Each occasion must be used, however trivial.”

Speaking of fascists, our current president continues to insist that he won an election he has lost (by seven million votes in the popular vote and by scores of electoral votes), whipping his followers up to reject the legitimate result and degrading further still the democracy that neither he nor his party really believe in. MacNeice’s recognition that an existential threat to civilization requires even the scrupulously critical to engage in the compromising enactment of political commitment resonates. “[A]ll of [us] must align against the beast / That prowls at every door and barks in every headline.”

I have argued that MacNeice undoes his poem’s resolutions even as he makes them, but the revelation he experiences in the Underworld of Oxford does effect a shift, both biographically and within the narrative of Autumn Journal, from irony to commitment. In the Odyssey, the shade of Tiresias tells the hero how to stop wandering and get home to Ithaca. In the Aeneid, the shade of Anchises discloses to his son the future of the Rome that it’s his destiny to found. In the Inferno, the shade of Virgil shows Dante the truthful manifestation of divine love as the punishment of sin. His sojourn in Oxford reveals to MacNeice the reality that the nation is full of “lost souls” and that battle must be done with the beast that threatens. While the next sections of Autumn Journal will take him back into memory and self-criticism, the next months of MacNeice’s life took him into the streets. Making good on his resolve in earlier sections of the poem to join with others and to walk, MacNeice took to activism in the late fall of 1938, joining the Association of Writers for Intellectual Liberty (a group whose stated purpose was “to alert the public to the threat of fascism”), participating in marches to demand British intervention in support of the Spanish Republic, and marching with 300 students and faculty of London University to protest the ratification of the Anglo-Italian pact. Interviewed at the latter protest, MacNeice was quoted in the New Chronicle as saying “This is the first time that the staff of London University have done anything like this. It shows you how strongly some of us feel about it.” You get the idea that he is really speaking for himself.

And that he’s speaking for us too.

Michael Thurston is the Provost and Dean of the Faculty, and Helen Means Professor of English Language and Literature at Smith College.