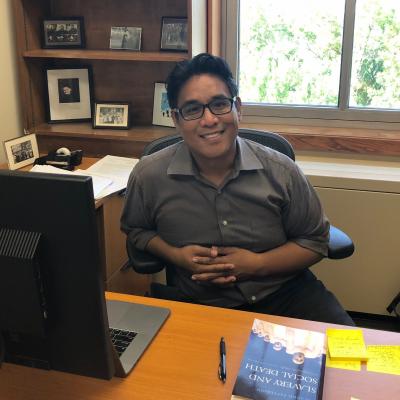 What is a meaningful politics for Asian Pacific Americans (or APAs) at this historical conjuncture? Put another way, when APAs experience anti-Chinese racism under COVID, in a time of murderous racial violence by the police against Black people, what is to be done?

For clues, I turn to the example of Filipino farmworkers in the Great Delano Grape Strike of the late 1960s in California.

Migrant agricultural work was and remains back-breaking work, paid by the piece or the bushel and marked by unsafe working conditions and substandard housing, often lacking basic sanitation and adequate plumbing.

The two main contenders for the loyalty of farmworkers in mid-twentieth century California were the Filipino Agricultural Workers Organizing Committee (or AWOC) and the largely Mexican United Farm Workers of America (or UFWA).

Both groups had become farmworkers by way of American imperialism. Filipinos were lured to the United States with the promise of academic scholarships. The Pensionado Act of 1903, which funded these scholarships, was designed to pacify Filipinos who resisted American imperialism after enduring centuries of Spanish rule. Mexico ceded California to the United States as part of the settlement of the Mexican-American War (1846-1848). Newly landless Mexican families had little choice but to work for white growers. Though Filipinos and Mexicans shared a similar history, their experience of farm work and mass resistance was notably distinct.

Led by Larry Itliong and Philip Vera Cruz, Filipinos were the minority of the farm workforce. Though they experienced daily racism and bad working conditions, they were seen as skilled permanent workers and were treated more humanely by white growers than Mexicans. They were affiliated with the AFL-CIO and received the kind of monetary infusion of cash that only a major institution could provide. They also had critical expertise in mobilizing strikes.

Led by Cesar Chavez and Dolores Huerta, Mexicans were the overwhelming majority of farmworkers, and overall they were treated worse than Filipinos in wages, hours, and working conditions. The UFWA was funded by meager member dues and Saul Alinsky’s organization in Chicago. Chavez was influenced by Fred Ross and the ACORN community organizing model, Gandhi’s nonviolent brand of anticolonial protest, and the Civil Rights Movement.

I won’t go into much detail about the strike, but suffice it to say that Filipino workers walked off the job first; they organized a small but disciplined, highly effective strike force that shut down the fields. The much more numerous Mexicans soon joined, in part because they had no training in waging a work stoppage. What Mexicans did know was how to wage a public relations campaign to expose the rampant racial violence and labor abuse of agribusiness. It was their idea to begin a grape boycott and march to Sacramento.

That campaign led to the first real industry-wide agricultural union contracts in the United States. Subsequent actions then pressured the California governor and legislature to pass the Agricultural Labor Relations Act in 1975, which legalized collective bargaining in the fields for the first time.

I say all of this to make two points.

First, the relative stature of Filipino and Mexican workers in America’s racial hierarchy is similar to the contemporary stature of APA victims of COVID racism and Black victims of police brutality. Though the country has had its first Black President in Barack Obama, in terms of everyday racial violence, Asians are not the ones being gunned down with impunity.

Second, despite status differences, Filipinos and Mexicans combined their techniques of mass strike action with those of community organizing, the anticolonial struggle in India, and the Civil Rights Movement to force a massive concession from Capital and the State.

So what would a meaningful APA politics look like in this moment? Broadly speaking, it would look like multiracial mass mobilization in the spirit of the Filipino Agricultural Workers Organizing Committee. On the ground, such action will require an ethic of openness and mutual learning with the understanding that the struggle will be long—and fraught with attempts to divide us, appease us, and wait us out.

The good news is that we have been here before, and we have prevailed.

Cedric De Leon is Professor of Sociology and Director of the Labor Center at the University of Massachusetts Amherst.