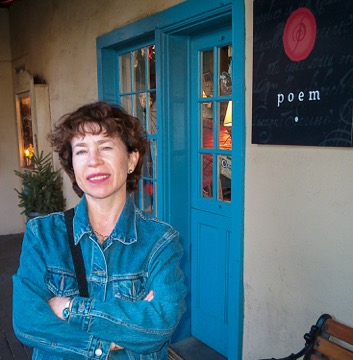 I wanted to build a boat and launch for Amsterdam.
Foxtrot on the upper deck in a moon-spangled frock.
I wanted to hold the sky like a bowl, smudge the clouds.
Bring a sentence to its knees. I moved to a spit of land on the coast.
Lit a hurricane lamp in the window. Lined my eyes with kohl.
Wore Goodwill dresses with sun-faded sleeves and glass buttons
My journal entries resembled waves.
—from "When he said Sell a book, I heard Sail," Volume 61, Issue 3 (Fall 2020)

Tell us about one of the first pieces you wrote.
In 8th grade I wrote a poem for St. Patrick's Day, believing that poetry required an occasion. All I remember of it is a leprechaun and one line: Watch out! (Like our current president, I hadn't yet learned to use exclamation marks sparingly.) During my chaotic childhood, my teachers were parental figures. What I do recall is showing the poem to my English teacher, his kindness and encouragement.

What writer(s) or works have influenced the way you write now?
The King James Bible and my grandfather's powerful sermons. He was a coal miner in Harlan County, Kentucky, and quit the company because he felt called to preach. He had a long second career as a pastor, presiding over river baptisms and tent revivals. I was also fascinated by my step-father's illustrated Ripley's Believe It Or Not! volumes and their unique content: a 17th century Belgian girl born with only one eye in the middle of her forehead and the cucumber shaped like the Eiffel Tower. Later, I discovered Gabriel Garcia Marquez's One Hundred Years of Solitude, Marilynne Robinson's Housekeeping (as close to a perfect novel as I can imagine). Faulkner. And Toni Morrison, particularly Sula and Song of Solomon. I don't know if these books changed the way I write. They changed me. The novelist John Hawkes, my teacher in graduate school, impressed upon me the precision of language. I still feel him over my shoulder.

What other professions have you worked in?
I dropped out of high school and worked first in a dry cleaners, then alongside my mother on an assembly line in a Kenner toy factory, then sold encyclopedias door to door. As a young adult, I worked for a non-profit arts organization soliciting donations from local businesses. My greatest acquisition was a cord of weathered lumber for a sculptor. I temped in many offices, although my sole qualification was a good phone voice. Eventually, I taught creative writing in Boston-area universities and in the Radcliffe Seminars. I also conducted a long-running series of private workshops in fiction and memoir writing, and have acted as Poet-in-Residence in public schools throughout Eastern Massachusetts. This summer, I taught a workshop on Zoom, and we did fine, but I miss the classroom.

What did you want to be when you were young?
I always wanted to write and to live among artists. I'm not sure if I chose the literary life or it chose me. I had no practical plan, just my grandfather's notion of a vocation.

What inspired you to write this piece?
I appreciate memoir in all forms, graphic, cinematic, epistolary. Poetry can function as memoir as well. I first came to Massachusetts in my mid-twenties as a fellow of The Fine Arts Work Center in Provincetown. This poem is about my time there and the natural beauty of the Outer Cape in the stark isolation of winter. Each year, the Work Center hosts ten writers and ten artists. As I came to know the painters and sculptors, I learned the language of visual art. There were romantic entanglements. I associate that era with high drama, but my focus always returned to the work on the page.

Is there a city real or imagined that influences your writing?
Provincetown was formative for me. I remember meeting Grace Paley in the Work Center parking lot. She wore a wool cap and was chewing gum. She shook my hand and in her wonderful Bronx accent said, “How you doing, honey?” It was late spring. My fellowship was coming to an end, and I already had a job. On my lunch hour I bicycled to her harborside apartment for a conference. She insisted on making me a cheese sandwich. She was and is one of my idols. I barely choked that lunch down. I kept thinking, “Grace Paley made this cheese sandwich.” We talked about my story. She disdained pretentious language. “You don't have to prove you're smart,” she said. “These characters are fine as they are. Just get them down and let them speak.”

Is there any specific music that aids you through the writing or editing process?
I love to dance, so day to day, I play zydeco, rhythm and blues, rockabilly. But when I'm writing I can only listen to white noise. If I'm on the Cape, the sound of waves. In the city, recordings of whale calls, or waterfalls on a running loop. Sometimes the hum of an air conditioner. A box fan in the window.

If you could work in another art form what would it be?
Film. One of the places I miss most in the pandemic is the Harvard Film Archive where over the years I've received an education in cinema. I've discovered everything from Michael Rohmer's neorealist 1964 film Nothing But a Man to Luther Price's collages of found footage combining vintage pornography, home movies, and film so degraded it is abstraction. The resulting pieces are haunting. I'm also interested in the young auteurs working in television, like Michaela Cole whose series I May Destroy You indeed slayed me.

What are you working on currently?
A series of lyric poems inspired by The Weekly World News, the black and white tabloid once ubiquitous at supermarket check-outs. “Farmer Shoots 6-Foot Butterfly!” and “I Was Big Foot's Love Slave!” are a few of my borrowed titles.

What are you reading right now?
Victoria Chang's collection of prose poems OBIT. Occasioned by her mother's death and her father's stroke, the poems appear in blocks of justified text like newspaper obituaries. The losses add up. There are obits for secrets, music, appetite, hands, oxygen, the ocean, a blue dress, and more. I'm following Sabrina Orah Mark's Paris Review blog Happily on fairytales and motherhood. I'm finishing Memorial Drive, a memoir by poet Natasha Trethewey and rereading The Tradition by Jericho Brown because they are both speaking at the Decatur Book Festival which I attended on crowd cast. The way we live now.

Twice a fellow of the Fine Arts Work Center in Provincetown, JULIA THACKER has also held fellowships from The Bunting Institute at Radcliffe and The National Endowment for the Arts. Her poems and stories have appeared in AGNI, The Boston Globe Magazine, Little Star, Missouri Review (as poem of the week), New Directions, The Pushcart Prize anthology, and others.