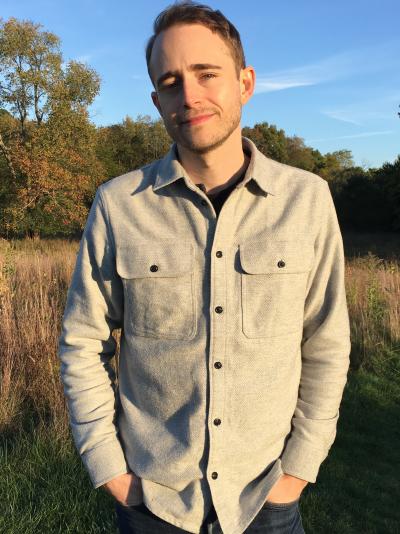 In Edinburgh I could not understand
what the cabdriver said as he drove me
to the restaurant, and inside the only person
who would speak to me was a Lithuanian
with pink hair, who leaned
above her wine and whispered,
nothing is familiar.
—from "Wood and Wire," Volume 61, Issue 3 (Fall 2020)

Tell us about one of the first pieces you wrote.
In second grade I wrote a story about a penguin who gets carried off on an ice floe. Then I invented a race of aliens and wrote about them in a coded language (which, unkindly, I forced my sister to memorize). All of the poetry I read in public school was from long ago. I loved it and felt I could learn from it as a writer, but to write poetry myself seemed like taking up the lute. I was working on an unfinished novel in the back of a café when a poetry open mic started. That was the first time I was exposed to poetry as a very broad space, a space of invitation that included people of different ages, backgrounds, and ways of speaking.

The first poems I wrote were passages from my novel and other scraps of language that I’d been hoarding for years, not knowing what to call them. Most of these were abstract and not very good—I remember an early poem about God disliking current translations of the Bible because they didn’t focus on love enough. Since then, I’ve given up the “I’ll now speak as a deity” conceit. But a live audience has an astonishing way of helping you ground your writing—the poem not as a “made thing” or controlled space, but as an attempt to reach out, to connect and invite communion. So, I think of that early poem, bad as it was, as a kind of opening.

What writer(s) or works have influenced the way you write now?
My first and greatest influence is probably still that open mic, which I attended for years. I continue to think of a poem not so much as a “made thing” or a controlled experiment, but as something sonic, a wave that draws others into its circle. I want my poems to be accessible, though I think this word sets up a misleading binary—as if what’s accessible to someone is some inherent quality in the poem, rather than based on context.

The Seattle slam scene had a really associative, image-driven aesthetic that’s kind of unusual for slam poetry, because slam has to be so accessible and populist. Buddy Wakefield, Anis Mojgani, Tara Hardy, Danny Sherrard and so many other Seattle-based poets taught me to push my language way out there, into that space where an audience gets what you mean but doesn’t know why. I learned how a simple conceit—like “this is a love poem” or “this is a list of images about X”—can catalyze this. I think that’s how someone like Neruda can have odes in a newspaper that get into really wild imagery.

These days I draw a lot from lyric poets like Jorie Graham, Alice Oswald, Larry Levis. From James Laughlin I learned to explore the line. I think Merwin is still trying to teach me about the line.

What other professions have you worked in?
My first job was as a janitor for a hospital. I also cared for folks with disabilities in their homes for several years, and really loved that work. It’s fascinating to be in someone else’s home, surrounded by the stuff of their lives. I learned that a person’s presence—what people might call a spirit or soul, that accumulated geology of being—sort of endures and transmits, even in someone who has lost their memories. And that everyone has a different way of doing the dishes, and almost all of us are convinced that our method is the only good one.

What did you want to be when you were young?
I wanted to study animals in the rainforest—preferably tree frogs.

What inspired you to write this piece?
I wrote this after teaching English abroad for a year (which paid a more livable wage than adjunct work). My stuff was crammed in the back of a friend’s apartment in Madrid, I was carrying around an unfinished novel and bits of half-formed poems. The only gravitational force came from the kindness of the people I met.

This poem is about one of those encounters—one that encapsules the whole experience of movement. There is no “default setting,” no country with a more “natural” way than any other, no fixed point in the universe or in our lives. That’s what general relativity means—there are just relative amounts of speed. And to me, this kind of sharpens the importance of holding to one another, of caring for one another.

The late slam poet Jack McCarthy, a master storyteller, probably influenced me somewhat in this poem.

Is there a city or place, real or imagined, that influences your writing?
The open mic in my hometown of Bellingham, Washington doesn’t exist anymore—continental drift set in. But the reading was really something special. There would be people packed into whatever café would host us, sometimes crammed around the door outside: slam poets and academics, folks of all ages there to listen and affirm each other. The best editing I’ve ever done is in the thirty seconds before getting on stage, when I realize what’s not necessary—what might seem neat or clever but might get in the way of someone connected with the poem.

Who typically gets the first read of your work?
My partner, Shannon, who is really patient about it. Someday, when we stop moving around the country, I want to help create a space for first reads that involve strangers—an open mic.

If you could work in another art form what would it be?
I want to create pottery—cups and bowls. I like the idea of making stuff for hands.

What are you working on currently?
I’m doing a little chiropractic work on a collection that I’m sending out, of which this poem is a part. I’m also working on a novel about a horse doctor in a dustbowl-era future.

What are you reading right now?
I just finished Ta-Nehisi Coates’ The Water Dancer. I’m going back to Dorianne Laux with her Selected Poems. Shira Ehrlichman’s Odes to Lithium has been another highlight of this year for me, and I’m winding my way—slowly—through Maria Popova’s Figuring.

RYLER DUSTIN is the author of Heavy Lead Birdsong (Write Bloody Publishing). His poems appear in places like American Life in Poetry, Gulf Coast, The Southern Review, and The Best of Iron Horse, and he was a finalist in the Individual World Poetry Slam.