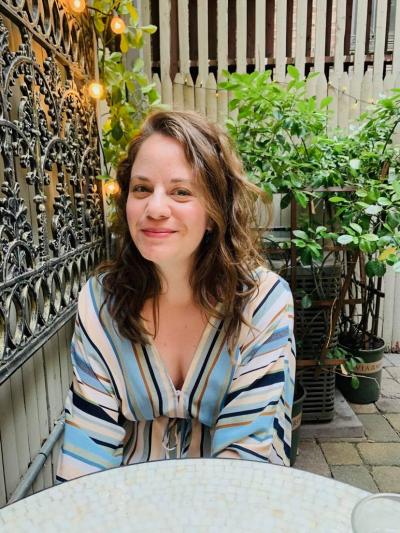 Abdullah was the first to forget her.

Standing at the counter with a soda and a pack of wintergreen gum, she assumed that the shop owener—with whom she prided herself on having established a rapport; it made her feel like a local—was just having a bad day.

"How's everything going?" she asked as he rang her up.

Tell us about one of the first pieces you wrote.
I remember as an elementary school student writing a short story called “Ghosts Who Are My Friends,” about a little girl who­—you guessed it—is friends with some ghosts. I’m pretty sure the backstory of one of them was that he was killed in the Holocaust. So right from the get-go I was going to a pretty morbid corner of my imagination. But it was probably also not a bad way of defusing childhood fears and managing feelings of vulnerability, by making the ghosts the protagonist’s pals. I think my approach to writing is not so different now—at least one goal is to head to the darker territories in a quasi-controlled but not entirely conscious way.

What writer(s) or works have influenced the way you write now?
For me it’s very amorphous how exactly my work has absorbed their influence, but writers who tap into the uncanny, surreal, supernatural, who defy the marketing categories of “literary” and “genre”: Kelly Link, Karen Russell, Ted Chiang, Samantha Hunt, Helen Oyeyemi, Brian Evenson, George Saunders, Kobo Abe, Italo Calvino, Samanta Schweblin. One of my best recent reading experiences was John Crowley’s “Little, Big,” which I guess is technically “fantasy,” but so much more. On the realist side, Gina Berriault’s short stories, Elena Ferrante’s Neapolitan novels, Marilynne Robinson’s everything. Virginia Woolf will probably be my forever favorite. I think one of the best works of art of the 21st century so far is David Lynch’s “Twin Peaks: The Return.”

What other professions have you worked in?
These days I’m a creative writing teacher and freelance journalist, but in my twenties—which Lorrie Moore in one story refers to as the “mishmash decade,” which certainly was the case for me—I did everything from nannying to teaching EFL in Japan to working some really dreadful temp gigs, including a stint at a LaCoste pop-up at the US Open, which I quit after three days despite really needing the money because the customers were that awful. I got fired from the temp agency after that. Who gets fired from a temp agency?

What did you want to be when you were young?
For the most part, a writer, though as a kid I once got a hunk of metal embedded in my cornea on a windy day at the playground, and after having it removed by a very nice doctor who gave me a lollipop I briefly thought I wanted to be an ophthalmologist.

What inspired you to write this piece?
A lot of my stories start not so much with characters or situations but with preoccupations. For “Iris,” it was questions like: Why do we so need to be “seen” by others, and how do we live with the knowledge that they don’t see us the way we’d like them to? How is our own perception of ourselves shaped by the stories about us others tell, and what are we without those stories? What does it mean about being a woman that as we age we start to be treated like we’re invisible? How do we cope with our looming nonexistence? And how do we move beyond these preoccupations and get the hell over ourselves?

Is there a city or place, real or imagined, that influences your writing?
I grew up on Long Island and mostly loathed it, though as I get older I find more of a fondness for the place. I see something endearing now in its particular brand of brusqueness and intensity and its maintaining of a distinct identity despite being so close to New York City, that cultural hegemon. Bob Hicok’s poem “A Primer” ends, “Let us all be from somewhere. / Let us tell each other everything we can.” He’s writing about Michigan, but Long Island’s where I’m from, so I’m going to tell about it.

Do you have any rituals or traditions that you do in order to write?
I have an ongoing Word doc called “Great Lines” filled with poems and prose excerpts that I open and peruse sometimes when I need to get in the mood.

Who typically gets the first read of your work?
My two writing groups: Libby Boland, Austin Grossman, and Helly Schtevie; and Lisa Gordan, Christine Meade, and Sarah Simon. Also my husband, who is not a fiction writer but whose outsider perspective is extremely valuable.

What are you working on currently?
I just finished extensive revisions on a novel so the till is empty at the moment. You have to just accept the unproductive stretches. We’re not machines. Whenever I’m ready I plan to finish a short story collection.

What are you reading right now?
Like a lot of people my attention span has suffered amid our public health and economic crises so I’m reading bits and pieces of a few books at once: one is the novel A Short Move by Katherine Hill, which is so good that even though it’s about football, which I’ve never been able to understand no matter how many times it’s explained to me, I’m enthralled. Another is What We Don’t Talk About When We Talk About #MeToo by JoAnn Wypijewski, a collection of essays about America’s many sex panics. I’ve also been making my way through The Stories of John Cheever, almost all of which are unfathomably good.

ALANNA SCHUBACH is a fiction writer, freelance journalist, and writing teacher. She was an Emerging Writer Fellow with the Center for Fiction in 2019 and a Fellow in Fiction with the New York Foundation for the Arts in 2015. Her short stories have previously appeared in Juked, Electric Literature, The Lifted Brow, Post Road, and more. She is at work on a story collection and a novel.