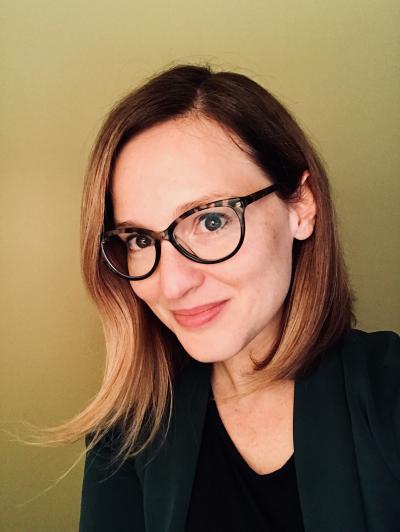 You hold my fists of loneliness
that clench the clumsy weight
of last ditch caresses. Beat into
your vinyl sheen is the pain I lug
to your altar to put the pain in
my hands:busted knuckle,
bound wrist, sprained heart,
—from "Alva and the Ode to a Punching Bag," Volume 61, Issue 2 (Summer 2020)

Tell us about one of the first pieces you wrote.
I was a bookworm growing up, so I took a stab at writing a few “novels” in elementary school. One was called “Enemy Lovers,” which is hilarious to me on many levels. I probably got the idea from a vague understanding of Romeo and Juliet and—even more likely—my sneaky watching of soap operas after school. I also found several pages of a story called “Three Strikes Your Dead,” a Nancy Drew fanfiction about a murdered minor league player, which I wrote on my mother’s electric typewriter and was probably inspired by all my brothers’ baseball games and tournaments I was dragged to. Everything else is a blur of mediocre-but-earnest poetry in college.

What writer(s) or works have influenced the way you write now?
So many writers have inspired and certainly influenced me. But I am constantly returning to Anne Carson, C.D. Wright, Natasha Trethewey, Haruki Murakami, Yusef Komunyakaa, Elizabeth Bishop, Primo Levi, Venus Khoury-Ghata, Herman Melville, and Emily Dickinson.

What other professions have you worked in?
Oh lordy. This is the first time in my life, as an adult, that I’ve had just one job—and I feel enormously grateful for that. But I’m also proud of all my wide-ranging job experiences. I’ve always had a job since turning 16 (sometimes 2-3 part-times ones, especially during my years of adjunctdom). I’ve worked as a groom and stall mucker at a horse farm; in restaurants; in retail--including a stint at Babies R Us in the late nineties (that job paid for a college trip to Europe, where I went to an art museum for the first time) and the National Archives gift shop in grad school. I worked a number of campus jobs and at a newspaper customer service call center.  In San Francisco, I worked for a year in the toy industry (a story for another day) during the recession when I thought I might try to carve a vocation outside of academia. And, of course, I’ve worked in education for many many years--my passion.  I’m curious about so many things, and I’ve moved a lot. I now teach in a super charged interdisciplinary environment, which I love.

What did you want to be when you were young?
"A book arthur” according to my school-year diary I filled out starting in Kindergarten. Also a vet, an archaeologist, and randomly, a “sports medicine doctor,” which I think was mainly a curiosity to be something that was the opposite of me. But I always wanted to write.

What inspired you to write this piece?
It was several months after Trump took office and all of my regular exercise routines weren’t working. Yoga, running weren’t enough. I felt scared and angry all the time. On a whim, I joined a women-owned kickboxing gym (bags only) in Atlanta and learned to throw a punch for the first time. It was the hardest workout of my life. At the same time, I felt safe in the gym’s mainly women-identified space. After these really intense classes, I noticed how carefully and tenderly many in the room would wipe down and disinfect the bags. It struck me as such an act of love for those coming into class next. The poem started with that image, that tension.

Is there a city or place, real or imagined, that influences your writing?
I’ve lived in a lot of places—Tennessee, Washington D.C., France, the Netherlands, San Francisco, Atlanta, and now Cambridge—and they all feature in my writing to some extent. I write a lot about mountains because I grew up in Southern Appalachia. Stan Plumly once told us in workshop: You can’t escape your landscape. Every year that rings truer for me. But I’m currently obsessed with a 9th century church in Aachen, Germany that I’ve tried to write about for over a decade; I think I’ve finally found the way in.

Do you have any rituals or traditions that you do in order to write?
I’m not sure if I have any rituals, but I need to feel alone. I need a closed door or a silent nook where I can feel anonymous. I feel most focused and productive in the mornings for sure, which is hard when the school year is in full force. So, at this point in life, I tend to write in intense short stretches when I have time off.

Who typically gets the first read of your work?
Writers who are also dear friends. I have a group of women from my Atlanta days with whom I share my most recent work. But I also have a handful of writer friends from various workshops and writing communities that have been an anchor for me for YEARS. I dream of getting to tell them all thank you in a book acknowledgements page one day. These friends are so precious to me.

What are you working on currently?
In some very new, rough poems, I’m exploring our relationship to various kinds of technology, especially as we increasingly interact with nature and each other through technology. But I’m also revising a novel set in East Tennessee where I grew up and dreaming up the shape for a new novel set far from home.

What are you reading right now?
I’ve found a rotating stack of books across genres keeps me from doomscrolling online. So, I’m reading a few things at the moment: Octavia Butler’s Lilith’s Brood trilogy, Esther Lee’s Sacrificial Metal, Stephanie Soileau’s Last One Out Shut Off the Lights, Safiya Umoja Noble’s Algorithms of Oppression, and Sasha Costanza-Chock’s Design Justice.

L. S. MCKEE’s writing has appeared in Best New Poets 2016, The Georgia Review, Crazyhorse, Copper Nickel, Blackbird, Gulf Coast, Oversound, B O D Y, and elsewhere. She received her MFA from the University of Maryland and was a Wallace Stegner Fellow in poetry at Stanford. Originally from the mountains of East Tennessee, she lives in Boston and teaches writing and communication across disciplines at MIT.