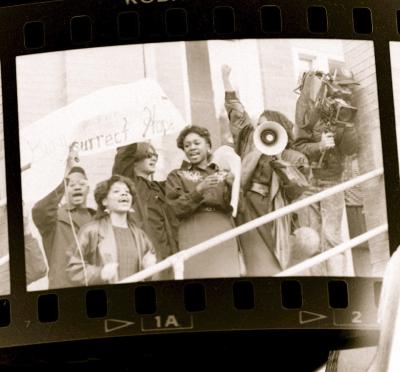 I was six when my family moved to Selma, Alabama, during the recession that closed out the 1970s. My dad had gotten a job at a paper mill down in the piney woods of Clark County, and Selma, almost an hour north, was the big town, at the time almost 24,000 people, with grocery stores and a decent public schools system, so we settled in.

Selma’s public schools had finally integrated in 1970, just eight years before we moved there. The Selma we moved to was only thirteen years removed from the events of 1965, including the Bloody Sunday march led by John Lewis and Hosea Williams, where state troopers beat Lewis’s head until his blood consecrated the asphalt of the Edmund Pettus Bridge. But thirteen years seemed like forever.

Edmund Pettus had been a brigadier general in the Confederate army, so bad at his job that he and the troops under his command were captured three times and put into military prison camps, to be released in prisoner exchanges, and after his last release he led troops into a string of losing battles during the Atlanta campaign. After the war, this failure of a military man became a Grand Wizard of the Alabama Ku Klux Klan, and also served as a state legislator and a U.S. Senator, hailed for his strong advocacy for Jim Crow and segregationist policies until his death in 1907. When a new bridge was built over the Alabama River in Selma in 1940, the men of the time named it for him.

We raise monuments and name prominent infrastructure not just as a means to honor a life, but as a society’s statement of the values to which it aspires. Or, at least, the values to which those with the power of naming aspire—in our case, the America that the people in power wish to create. The Selma of 1940 aspired to live up to—and even in—Edmund Pettus’s America, as did the Selma of 1965, and so did many citizens of the Selma we moved into in 1978.

In 1987, Selma hired the first Black superintendent of its public schools system, Dr. Norward Roussell, who previously had been an area superintendent in his native New Orleans. After a dynamic and successful first two and a half years as superintendent, one blustery evening in December 1989, the six white school board members voted against the five Black school board members to not renew Dr. Roussell’s contract, after its term lapsed at the end of the 1989-90 school year. They called him “too dictatorial”: for doing such things as introducing objective criteria into a system that had been routing a disproportionate number of the system’s white students into “Level 1” classes while relegating disproportionate numbers of Black students to “Level 2” and “Level 3” classes, and mandating that Selma High School’s band no longer be divided into white buses and Black buses when traveling to football games. In 1990, much of white Selma was still aspiring to Edmund Pettus’s America.

That was my senior year at Selma High School, and I joined with a handful of friends in organizing student protest activities in support of Dr. Roussell. We were young and still unjaded; we believed we could effect change. There were speeches made at various churches and civic organizations, a petition drive among school system students, a short boycott of the reopening of the second semester, the wearing of black armbands to show our support, a march on the school board building from the high school, and picketing of City Hall as well as businesses where the white school board members worked. Our efforts, I should add, were not surrounded by overwhelming community support. After the five Black school board members expressed their frustration by walking out of a school board meeting and not returning, the six white school board members voted to terminate Dr. Roussell’s contract four months early—because his situation had become a “distraction.” This action resulted in a sit-in at the high school; the school board then shut the schools down for five days, negotiating an end to the sit-in with a promise (undone a few weeks later) to allow Dr. Roussell to serve out the remainder of his contract.

Schools reopened under the watch of fully armed National Guardsmen, activated by Alabama Governor Guy Hunt; there were also metal detectors at each door, men in unmarked sedans with video cameras parked near the entrances, and helicopters overhead. Some of the student protesters received short suspensions; others were sent for a short period of time to an alternative school program. For about a month, the two white vice-principals tried to have me expelled. I had also been receiving anonymous hate mail calling me a race-traitor and suggesting I needed electroshock therapy, I found scrawled notes and heard full-throated yells of “n****r lover,” and I answered prank calls that threatened various forms of violence and death. More than six hundred white families pulled their children from Selma’s public schools and enrolled them in the two segregation academies in town, the military school up the road in Marion, or—if they could conjure a non-city address—into the county schools. It was into this Selma and this America that John Lewis—then Congressman Lewis—returned for the twenty-fifth anniversary of Bloody Sunday, during the first weekend of March 1990.

Back then, especially for someone my age, the twenty-five years since 1965 seemed like forever, ancient history. Yet here I sit now, thirty years removed from my senior year of high school, and those clouds pressing down and spring tornado lines and angst and threats and futility from 1990 seem like yesterday. I imagine John Lewis in 1990 must have felt the same way about the Selma he returned to, its closeness to 1965, to the state troopers and Sheriff Jim Clark’s brutal posse.

That year a small group of us were invited for a brief meeting with Congressman Lewis on the weekend of Bloody Sunday memorial activities, which would culminate, as it does every year, with a march over the Edmund Pettus Bridge. The students who got to meet with him were frustrated and disappointed. By then we knew that we would not achieve what we had hoped for, a renewal of Dr. Roussell’s contract, or even real recognition of the injustice we saw in his situation. Instead we’d seen many friends, or their families, repay us with hostility and trouble. Yet it was in that room that I first heard John Lewis speak of “good trouble.” He shook our hands and didn’t sugarcoat the events we were protesting, but he also lifted us up with the notion that America requires continuous and repeated acts of good trouble to achieve its promise.

To be in the room with him, to be in conversation with him, was a tangible reminder that we didn’t need to keep living in Edmund Pettus’s America, that we could aspire to live in John Lewis’s America, in Amelia Boynton’s America, in Marie Foster’s America, and in Frederick D. Reese’s America—and that every town and city and space in between likely had their own Amelia Boynton and Marie Foster and F.D. Reese to honor and to emulate. These three are just some of the many giants we grew up surrounded by in Selma, local heroes in the fight for equality and humanity during the Civil Rights Movement. Look them up, and then look up your own.

We have not, of course, left Edmund Pettus and Robert E. Lee and Jefferson Davis and P.G.T. Beauregard and John McDonogh and all their ilk behind. 1990 is not so far behind us, nor are 1965 or 1940 or 1907 or 1865. Statues and bridges and boulevards named for those men still mark our daily lives. And the murders of Black men and women and children by white people in power or who aspire to power remind us daily that this demarcation is not manifested merely physically in our infrastructure. That this violence continues today is immensely frustrating and drives feelings of anger and rage, within me and many others. John Lewis himself spoke to this recently when, after the start of protests following the murders of George Floyd and Breonna Taylor, he was profiled by journalist Cynthia Tucker for the Bitter Southerner.

Reacting to the justified expressions of widespread community anger, Congressman Lewis told Ms. Tucker, “I truly believe that, in keeping with the teachings of Gandhi, of Martin Luther King, of Jesus, that we cannot give up on the way of nonviolence, the way of peace, the way of love.” The love required is a radical love, an act of rebellion against our own nature to rage, a love that requires us to bind ourselves to our enemies until we can convince them that we are not their enemies.

I must confess, this form of radical love frightens me. I want to reject it with every fiber of my being. After leaving Selma as quickly as I could after 1990, I have fallen to the cynicism and jadedness that comes too often with age, to the inward-turning of career and parenthood, to the shelter of white privilege—when I’m just too tired, I can turn away. Yet I know I must fight against such traps, I know that it is fully engaged, radical love that I must aspire to, that—in a million individualized ways—all of us must aspire to. It is the love that John Lewis brought to Selma in the 1960s. It is the love that he brought back to Selma in 1990. It is the love that he pursued in Southern buses in the racist night and in the halls of Congress.

I know we need to tear down the monuments and memorials to white supremacist America, and yet I had long been on the fence, so to speak, about the Edmund Pettus Bridge. What better subversion of that failed Confederate general and KKK Grand Wizard than to have the bridge named after him be a monument and memory of the advancement of voting rights for Black people, the very people he dedicated his life to trying to subjugate and (to borrow today’s rhetoric) “dominate”? I’m not on that fence any longer. We need to aspire to something better than the revenge of circumstance. We need to aspire to the justice and radical love of John Lewis’s America. That is the America I strive for, that I want my children to strive for. We do not name bridges and roads from our cynicism, we name them according to our aspirations.

Tad Bartlett writes, teaches, and practices law in New Orleans. His short story, “When the Storm Comes,” appeared in Volume 61, Issue 1 of the Massachusetts Review.