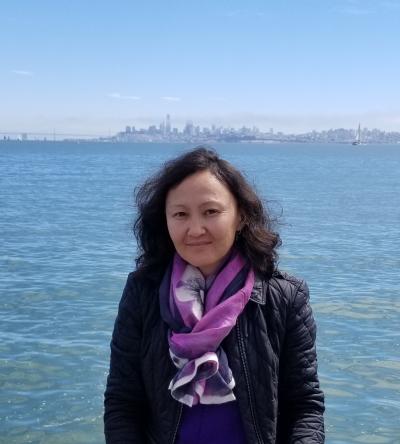 The pass through the mountains led into a narrow, serpentine ravine with dense forests of birch and poplar on both sides. A caravan of nine camels loaded with bridal dowry and accompanied by a couple dozen men and women on horseback slowly made its way along the rocky trail, now ascending steadily, now dipping abruptly downhill. The sun, that had only recently been seen high overhead, occasionally peeked between the stark gray hilltops, which crowded and clambered on top of one another. At times, the sun hid behind them and shadows fell on the canyon walls, turning them deep green. Only the pale bark of the tall birch trees, slender and close-set, shone dimly in the dark. Toqsaba, riding in the middle of the procession kept turning to look at his young bride.
—from "Fire" by Mukhtar Magauin, Translated by Mirgul Kali, Volume 61, Issue 2 (Summer 2020)

Tell us about one of the first pieces you translated.
In 2013, three years before I began considering literary translation as a possible full-time occupation, I translated a short poem “Laylim Shyraq” (“Laylim Darling”) by Birzhan-sal, the nineteenth-century Kazakh bard and musician. Birzhan-sal was a gifted improvisational performer, so “Laylim Shyraq,” like most of his poetry, was born as an impromptu song that he was said to deliver at the sight of the beautiful young Laylim, the younger sister of two wealthy Kazakh men whose village he happened to stop by. There are other stories about the origin of this poem-song, performed by traditional Kazakh singers to this day, and each of these stories slightly change the interpretation of the poem. My early reading and the subsequent translation of the poem focused on a sense of wonder and profound sadness over falling—suddenly, helplessly, utterly—for someone who is ultimately unattainable.

What writer(s) or works have influenced the way you write now?
The house where I grew up was next door to a library, and I went there almost every day. It was a small rural branch of a regional library with a limited selection of old books, most of which were works by Russian classics: Pushkin, Gogol, Turgenev, Tolstoy, Chekhov. I was young and impressionable when I first began reading these authors, and I feel that the language and emotional atmosphere of their works have influenced my writing aesthetic.

What did you want to be when you were young?
I wanted to teach Russian literature and language and write fiction in my free time. However, I was also a properly-raised Kazakh kid conditioned to prioritize the well-being and success of the family over my own desires, and that was how I ended up studying engineering instead of literature.

What other professions have you worked in?
My first job out of college was at a small construction company where I alternated between helping with estimates in the office and mixing concrete at the building sites. Although several years have passed since the dissolution of the Soviet Union, the economy of the newly-independent Kazakhstan was still reeling from consequences of the collapse. Like many other people at the time, I received large sacks of potatoes, cabbage, and beets instead of cash. I left the company the following year to try my fortune at a nearby oil field where my career in the petrochemical industry began. I’ve worked as a field engineer, project scheduler, cost engineer, and estimator.

What drew you to write a translation of this piece in particular?
I think it was 2017 when I began looking for a translation project I could use to apply for the American Literary Translators Mentorship program. I chose to translate Kokbalaq, a novel by Mukhtar Magauin, for two reasons: it was the shortest of a dozen books I had read that year and its reticent protagonist reminded me of my father. Kokbalaq tells a story of a traditionally-trained Kazakh musician trying to adjust to a new way of life under the Soviets. It’s a beautifully written and heart-rending story that sheds light on how colonial practices contribute to the suppression of indigenous art, which serves as a vital link to the historical past of colonized peoples. This erasure of the past aids in the cultivation of spiritually impoverished successive generations, primed to absorb the colonizer’s language, culture, and ideals. In “Fire,” an excerpt from the novel, we witness the young Toqsaba crossing the mountain pass that separates his past, filled with anticipation of a lifetime of music, from his future, which brings loss, loneliness, and a sense of unfulfillment. I’m continuing to translate Magauin's novel.

Is there a city or place, real or imagined, that influences your writing?
I’ve lived in the US for many years but my thoughts and actions are invariably turned toward my homeland. I remember realizing about a year ago that literary translation was simply a way for me to be as close and involved in Kazakh life and culture as possible while living abroad.

Is there any specific music that aids you through the writing or editing process?
I don’t usually listen to music when I work, but Kokbalaq is a book about music, so I’ve spent some time researching and listening to the kuys mentioned in the novel. Kuys are short musical pieces played on a dombyra, a long-necked, two-stringed instrument that belongs to the lute family. Kuys are deceptively simple, and the listener must be attentive and imaginative to hear a story it tells or relate to a state of mind it reflects. I find that the best way to listen to them is to close your eyes and imagine your heart beating and singing to the rhythm of a kuy.

Who typically gets the first read of your work?
My two translator friends, Ena Selimovic, who translates from Bosnian, Croatian, and Serbian, and Sabrina Jaszi, who translates from Russian and Uzbek. We meet regularly to review each other’s work and have recently started a tiny Turco-Slavic literary translation collective.

If you could work in another art form what would it be?
When I was fourteen, I wrote a story about a twenty-year-old woman (I remember thinking of anyone in their thirties and over as hopelessly old and boring) who reads a letter from her fourteen-year-old self and realizes she hasn’t reached any of her dreams. I sent it to “Prostor,” a Russian-language literary journal published in Kazakhstan, and several months later, received a letter declining my story but encouraging me to continue writing. Being an anguished teenager, I threw the letter away and decided to never write again. Looking back at it now, I realize that a personal letter from an editor of one of the most widely-read literary magazines in USSR at the time was a compliment. I think I might end up writing a story or two at some point.

What are you reading right now?
I’ve been reading major works of Dostoyevsky in the last couple of years and just finished The Adolescent. I’m also reading the short stories by the early twentieth-century Kazakh modernist writer Zhusipbek Aimauytov. Aimauytov, who was also a poet, playwright, literary critic, journalist, educator, and translator, is known for his fierce, impassioned writing and experimentation with literary form, styles, and genres, and I’m interested in translating some of his works in the future.

MIRGUL KALI is a native of Kazakhstan based in the U.S. Her translations of short stories by Kazakh writers have appeared in Tupelo Quarterly, Asymptote, Electric Literature, and Exchanges. A recipient of 2018-2019 American Literary Translators Association’s Emerging Translator Mentorship, Mirgul is currently continuing her work on the novel Kokbalaq by Mukhtar Magauin.