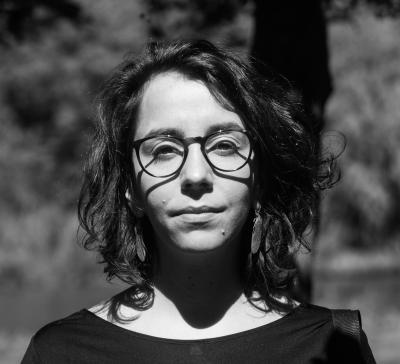 Mrs. Ebelmayer had not seen the world. She had spent her childhood and youth in a pleasant, roomy house in the suburbs of a large city and , once married, had outgrown the early stages of her life in a house very similar to her first, in another suburb of the same city. After being unanimously advised to move to a warm, dry country, due to Mr.Ebelmayer's illness and following mandatory consulatations with several doctors, Mrs. Ebelmayer kept all her usual routines. She transferred her cold and damp city life to a town that baked daily under the sun and nothing, and no one, could convince her that adaotability was a positive trait. Five years after their move, this preservation was practically intact.
—from "A Foreign Country" by Soledad Puértolas, Translated by Julia SanchesVolume 61, Issue 2 (Summer 2020)

Tell us about one of the first pieces you translated.
One of the first pieces I translated, for pleasure, before I had any idea what I was doing, was Clarice Lispector’s ‘The Fifth Story,’ which you can now read in Katrina Dodson’s incisive translation in Complete Stories. The story follows one woman’s endeavor to kill cockroaches that have infested her apartment, described in several different ways of increasing momentousness. It begins:

‘This story could be called “The Statues.” Another possible name is “The Murder.” And also “How to Kill Cockroaches.” So I will tell at least three stories, all true because they can’t contradict each other. Though a single story, they would be a thousand and one, were I given a thousand and one nights.’

What writer(s) or works have influenced the way you write now?
I tend to immerse myself in a variety of English texts when translating a particular book or story or poem. I have just finished translating a novel provisionally titled Late Summer by Brazilian author Luiz Ruffato (more on this below). As inspiration, I listened to Cormac McCarthy’s All the Pretty Horses and reread Jon McGregor’s Reservoir 13. I also watched the movie Norma Mae for vocabulary about cotton mills and the men and women who work there, as well as atmosphere. I think the best thing a translator can do is read often and widely, because language-learning never really ends.

What other professions have you worked in?
Since graduating, I have mostly worked in publishing—as an agent, as a reader, as a bookseller. Before moving to the US, I had a year of teaching English to hairdressers in Barcelona, and worked the grape harvest for two falls in Switzerland. I also worked at café for a summer in Edinburgh, and as a photographer for a small publication during the Edinburgh Fringe Festival, while on the side I was paid to write Yelp reviews (never trust a Yelp review).

What did you want to be when you were young?
As my mother loves to remind me, I wanted to be Britney Spears. I have no recollection of this, but who am I to doubt my mother?

What drew you to write a translation of this piece in particular?
Soledad Puértolas is one of Spain’s most recognized short story writers, and yet her work is hardly available in English. I picked up one of her books while living in Barcelona several years ago. I believe the story in this issue may have been the first piece of hers I ever read. Knowing myself, I was probably drawn to the title, and wondered what the perspective might be in a piece called “A Foreign Country”. Would it be exoticizing, alienating? Finally, it was the staid quietness of the prose that drove me to translate it, though I was also equal parts touched and baffled by Mrs. Ebelmayer’s bullish insistence not to adapt to her new setting.

Is there a city or place, real or imagined, that influences your writing/translating?
An odd question for a translator, perhaps, since place—or inhabiting another place—is such an enormous part of our work. Sometimes I think I came to translation as a way of feeling more connected with my home country, Brazil, and other places I have lived and grown up in (Mexico, Switzerland, Spain). A way of addressing an unrelenting saudades, which is the Portuguese noun for the feeling of missing a place or person and is not as untranslatable as people like to claim.

Is there any specific music that aids you through the writing/translation or editing process?
I need to translate in silence, or at the most with music that is wordless. I did go through a period of translating to Tristan und Isolde. I can’t for the life of me recall what I was working on.

Do you have any rituals or traditions that you do in order to write/translate?
I’m not sure if this counts as a ritual. I’m a creature of habit, so I follow a fairly strict work routine. At some point in my life I became a morning person, so I am usually at my desk by eight a.m. and off my desk by six. I have trouble toggling between projects in a single day, so if I am working on several short translations at once, I dedicate a full day to each. I imagine it’s out of fear that the voice in one text will contaminate the other without my knowledge, and that I won’t catch the intrusion until it’s too late.

Like many, when editing, I read aloud. Sometimes I also record myself reading the text section by section and then listen to it in order to catch any infelicities, anything that, as my friend and fellow translator Heather Cleary puts it, “makes noise.” Lately, I have started copying and pasting single sentences into another word document so that I can see it more clearly, uncluttered by the rest of the text. I have only translated a handful of books so far, and every new project seems to come with a new set of strategies.

What are you working on currently?
I have just delivered my translation of a novel by Brazilian author Luiz Ruffato. It follows a middle-aged man with a terminal illness who travels to his hometown in order to revisit his past and come to terms with a moment of enormous loss in his childhood. Except, no one wants to indulge his nostalgia, and most people seem to have forgotten incidents that he remembers with clarity. The book is in a way a swan song for a particular time and place. A Brazil off the beaten path. The author’s descriptions are painstakingly exact, and very evocative. He writes beautifully about nature and with enormous respect for working-class Brazil, who don’t get much airtime in Brazilian literature.

What are you reading right now?
This past week I read Sharifa Rhodes-Pitts’ Harlem Is Nowhere, a dynamic and fascinating portrait of Harlem told through a deeply engaging and engaged first-person perspective (the researcher is an intrinsic part of the narrative) and Kristen Gehrman’s dazzling new translation of Dutch novelist Dola de Jong’s The Tree and the Vine, a mid-century love story between two women whose faint but pressing backdrop is the Second World War. I always find it difficult to choose what to read next, so have been dipping into several books as I try to decide: Jenny Erpenbeck’s Go, Went, Gone (tr Susan Bernofsky), Assata: An Autobiography by Assata Shakur, and Ottessa Moshfegh’s latest, Death in Her Hands.

JULIA SANCHES translates from Portuguese, Spanish, and Catalan. She has translated works by Susana Moreira Marques, Daniel Galera, Claudia Hernández, and Geovani Martins, among others. A founding member of the Cedilla & Co. translators’ collective, she lives in Providence, RI.