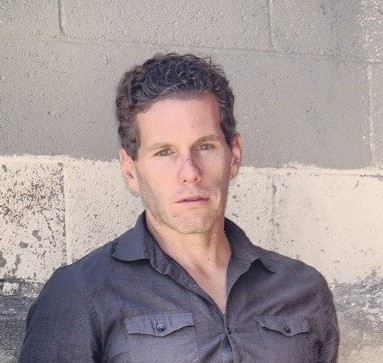 By the age of eight, I had heard all the horror stories about my father.

I had heard the one about him literally putting his fist through a cop's face. I had heard the one about him sending a badass Irish gangster into convulsions with a single jab. And who hadn't heard the navy tale about Tony Volpe punching his chief petty officer with a bottle of San Miguel in hand, punching him repeatedly, even after the bottle had burst, punching with the jagged end, again and again, disfiguring the man's face and permanently blinding one eye.
─from "Jesus Kicks His Oedipus Complex," from Volume 61, Issue 2 (Summer 2020)

Tell us about one of the first pieces you wrote.
My grandfather immigrated from Abruzzo, Italy to Quincy, MA. He and his father started a very successful granite company. He was a fervid believer in the American Dream. He died from stonecutter lung before I was born . All that granite dust. My father, a union laborer and armchair Marxist never had much to say about him. I fictionalized my grandfather’s passing so I could get to know him, so I could be there as he was dying. I thought it would bond us. It didn’t, but at least I scored my first publication.

What writer(s) or works have influenced the way you write now?
My fiction and nonfiction invoke different answers to this one. For my nonfiction, I’d have to say Sarah Manguso. I have an essay coming out in August that was inspired by those meditative subdivisions she does. They’re like subtraction by addition. They leave you with a wonderful sense of nothing. They’re very enthymematic. I like my nonfiction to come way of terse, declarative sentences, pithy and cogent, but in my fiction, I tend to be lengthy, descriptive, and conceptual. Maybe I’m ass backwards. Anyway, I just read Bellow’s Auggie March for the first time, and that reinforced a lot of my fiction instincts and inclinations.

What other professions have you worked in?
My LinkedIn page is whack. From twelve to twenty-seven, I worked in the restaurant industry: dishwasher, busser, barback, server. After that, I worked as a tree cutter for six years while going to grad school, continuing part-time when I landed some gigs teaching college. As a creative writing adjunct, I moonlit as a construction grunt, demolishing houses for a buddy’s company. Before moving to California, I was teaching at a small university in RI and working on an organic farm. Farming was my favorite job ever. Pruning fruit trees was my specialty. I saw it as penance for my sins as a tree cutter. I’ll get back to farming someday. Maybe when I re-immigrate to Abruzzo.

What did you want to be when you were young?
First baseman for the Red Sox. Undisputed middleweight boxing champion. Comedian.

What inspired you to write this piece?
When your father is Mr. Massachusetts, and he gladly jumps into a cage to wrestle an Alaskan brown bear, you’ve got to do something with that. If you don’t, you’re blowing it. You’re not only doing a disservice to yourself, but you’re insulting all those poor struggling writers searching for a narrative voice from their background of painless normalcy.

Is there a city or place, real or imagined, that influences your writing?
I spend a lot of time inside the figurative and abstract landscape paintings of Richard Diebenkorn. I’d like to build a mid-century modern writer’s studio inside any of his Ocean Park paintings. When I moved to L.A. seven years ago, his Main Street studio was two miles from my apartment. I walked by it all the time. There was nothing to see. No remnants of Diebenkorn or his paintings, but that didn’t stop me from entering them. Now I live in Redondo Beach. When the late-morning sea breeze picks up, I sit under the palm tree in my yard and stare through the neighborhood grid of fences, rooflines, and telephone wires until I find myself inhabiting Ocean Park #114. I sit there among the holy hush of fronds, complacent as the woman in Wallace Stevens’ “Sunday Morning.” California is only a simulacrum. Diebenkorn’s landscapes are the original.

Is there any specific music that aids you through the writing or editing process?
I just finished a postmodern bio-novel about an early 17th century Italian artist. It’s historically accurate but told in a very contemporaneous voice. To maintain that, I listened to copious amounts of The Velvet Underground throughout the writing process. It helped me transform early modern Rome to 1970’s NYC. There’s a triangular love affair in the novel, and “Romeo Had Juliette” was the instrumentation of various love scenes. When I’m done writing for the day, I’ll listen to some MF DOOM. I find his phrasing and lyrical agility inspiring. Before writing, I usually listen to Thelonius Monk’s “Let’s Cool One,” the live at the Five Spot Café version on the Misterioso album. Few of his songs are singable, but “Let’s Cool One” talks to me. It fires up my synapses.

Do you have any rituals or traditions that you do in order to write?
Rituals seem like a luxury. I write whenever I can. If I have forty-five minutes of free time from parenting and work, I sit down to write or revise. The last six months of writing my novel were painfully slow. I had very little time to myself. I wrote every other day, in one to three-hour chunks. It was torturous and terrifying. Self-doubt, panic, dread. I guess those would be my rituals.

Who typically gets the first read of your work?
My wife Sara hears passages and chapters. She doesn’t sugar-coat anything, but she’s from the Midwest, so even her harshest criticism sounds sweet. When there’s a complete manuscript, I send it to my bud Thomas Deininger. He’s a visual artist and an excellent reader. We grew up together in the Boston area amongst a circle of friends who like to brutally ego-check other. I know I can trust him to give me an honest take. My writer friends Colette Sartor and David Schuman have read versions of the current novel along the way, and I’m very thankful for their support.

What are you reading right now?
I teach rhetoric and writing at Loyola Marymount University. Being of Italian descent, I’ve always had an interest in fascism, how it seduces individuals and entire nations. It’s such an invasive ideology, more so than democracy. People welcome it into their lives without realizing it. The rhetorical arts course that I teach at LMU incorporates the Jesuit value of Eloquentia Perfecta: the good person speaking and writing well for the common good. It seeks to democratize the teaching of composition and oration. It’s an interdisciplinary class with equal parts politics and exposition. I like to keep my course fresh, so I’m always reading books on fascism, demagoguery, and sophistry. Right now, I’m reading Barthes’ Mythologies. I’m also reading Ambient Rhetoric by Thomas Rickert, and Still Life with Rhetoric by Laurie Gries. Of course, I’m always reading something about Diebenkorn and the other Bay Area figurative painters.

EUGENIO VOLPE is the author of the novella The Message. His writing has appeared in Post Road, Salamander, BULL, VICE, and other publications. He is a PEN Discovery winner. Born in raised in the Boston area, he now resides in Los Angeles with his wife and son. He teaches rhetoric and writing at Loyola Marymount University.