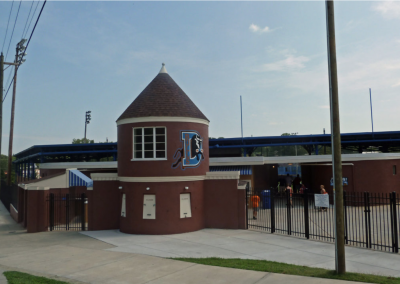 (Photo from "Where are They Now: Ballparks of Bull Durham")

Two decades before the small old ballpark
became a shrine to Hollywood nostalgia
I was there, a college kid, new in town,
sitting alone, ten rows from the field
and five hundred miles from home.
The sparse crowd that steamy Sunday
under a milky August sky, the park itself,
with its plastered ads for the local body shop,
beauty salon, butcher, and funeral parlor,
all just down the street, and a tire mounted
atop the outfield fence (fifty bucks
to any batter blasting one through it)
seemed to compose a quaint landscape
of an easier, quieter time. The PA announcer,
his tobacco-seasoned voice languid
with elongated vowels and drawn-out diphthongs,
made all seem comfortable as a porch couch
after Sunday fried chicken and fixin’s at Aunt Bee’s.

It took me an inning to notice that only blacks sat
on the bare boards of the bleachers down the line,
while in the shaded grandstand, with its seatbacks
and armrests, I was among none but my fellow whites.
Ticket price or simple habit must have brought all
to their places that quiet afternoon, I told myself,
because by now signs for “Colored Only” had gone the way
of lynching. Then an old black man in a timeworn suit,
holding the hand of a little black boy in crisp shirt and bow tie,
moved in three rows below me. A moment later, hard-eyed
and smirking, three whites, their cigar smoke
drifting over me, sat behind the pair. Gobbling peanuts,
they dropped the shells casually on the old man’s head,
as if it were a barroom floor. The child’s lips trembled,
and the old man whispered in his ear and kissed his cheek.
Rigid, as if looking into a noose, they stared at the field
and would not turn. Cigar ashes were flicked
on the man’s shoulders and shells continued to fall,
amid snickers and guffaws. I looked toward all the others
seated in the shade. The sole cop in the park
watched, grinning, and everyone else either
smiled or made it a point not to notice.

Maybe Crash Davis, Nuke LaLoosh, and Annie Savoy
could have handled things. I only sighed,
felt a flush at my neck,
turned, and trudged back to campus.


ALLEN STEIN teaches at North Carolina State University. His poems and stories have appeared in Poet Lore, Willow Springs, Salmagundi, and New Ohio Review. His first poetry collection, Your Funeral is Very Important to Us (Main Street Rag) appeared in 2019. His second, Unsettled Subjects, is forthcoming with Broadstone Books.