Some Kind of Record 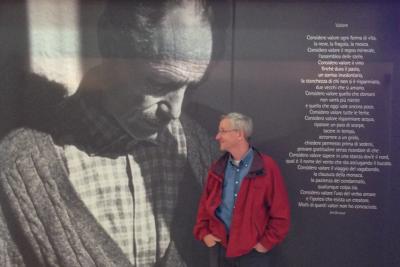 First, let’s get one thing straight. I’ve never set foot in a war zone. For the past two decades, actually a bit longer, I have spent a good deal of time in a former war zone, but that’s hardly the same. And the difference isn’t simply existential, it’s categorical, in the Kantian sense. That said, over that same period, I have consistently tried to do what little I can do, with the means and abilities available to a middling academic and lit mag editor, in order to respond to the damage that war leaves in its wake, in the lives of one generation, and the next, and no doubt the next, the broken lives of those who have experienced what I haven’t. If you’d seen it, I’m certain, you would have done no less.

One gesture in this direction is the teaching. After all, that’s what academics do: they read, occasionally they write (stuff that no one reads), and, to earn their bread, they teach. And so “War Stories,” a course that I’ve taught for twenty years and have promised to stop teaching whenever my country lets me, which is to say never. This year, when my 115 students left Amherst in mid-semester, scattered by the viral winds, I asked them to keep a journal, to track whatever they heard, felt, or saw that seemed to connect our post-COVID world with the experiences and histories that our syllabus was putting in their path. I did my best not to confuse things, or them. I told them that this isn’t a war zone, and we’re not under siege. The difference isn’t simply existential, it’s categorical.

And yet I also told them to track what they saw and heard from others, and to think carefully and deeply about the choices that they themselves would face. They’d already had a half semester of war stories, so, as Larkin famously (and optimistically) said, “Never such innocence again.” By now they knew that dark times put us all to the test, and that we have to decide who we are, what sort of people we’ll be. A couple of weeks ago the semester finished, but I still hope they’re keeping some kind of record.

As for me, I got lucky. The Mass Review had recently launched a new blog series, “After Us,” originally meant to focus on the climate crisis but quickly repurposed for immediate use, as a forum for corona lit. Then, a few weeks ago, I heard from Erri De Luca, a friend and writer I often translate, about a COVID-related project he’d decided to launch, along with his producer Paola Porrini Bisson, the Israeli director Michael Mayer, and Richard Petit as art director. De Luca’s Decameron 2020 would invite writers from around the globe to take inspiration from Boccaccio, the great Tuscan storyteller who survived our planet’s worst plague years, and whose collection of tales has social distancing as its frame narrative. Actors would be enlisted to read these new stories, aided by Bisson, Mayer, and Petit, and the results would be posted on YouTube. As Erri notes, the goal is that,

from their respective retreats an ensemble is born . . . not a single sum or synthesis, but instead the expansive, feverish imagination of shut-ins. From the four corners of the world comes this chorus, willing a breach, hoping to break the siege.

One of the great horrors of the history we’re living, with consequences so lethal that the toll will take years to reckon, is the lack of preparation and militant blindness of our political leaders, and our social systems, in addressing this crisis, a pandemic that every expert had been predicting for at least a quarter century. However, unlike the politicians, the medical establishment, and the corporate robber barons, our writers and artists were clearly ready for all this. They are, at the very least, gathering data, taking notes, keeping records, and making plans. Erri likes to quote Izet Sarajlić on this point: in times like these, it’s the poets who work the nightshift.

When the global economy is frozen, as many have noted, certain things that were always true have suddenly become more visible, self-evident to all. First, we are reminded that economy shares an etymology with ecology, that both are rooted in oikos, the Greek word for both “family” and “house.” Second, that our lowest paid, most neglected workers have been recategorized as “essential,” and those not necessary in keeping the current subsistence economy afloat have been left to revel in the ultimate privilege, their relative security. It would be silly, I’m sure, to throw out entirely the rather obvious idea, most famously elaborated by Abraham Maslow, that we humans labor under a hierarchy of needs, that food and shelter come first, with self-esteem and self-actualization later, if at all. Yet I will, nonetheless, risk it: in times like these, we must realize that artists and writers are more essential than ever—provided, that is, we indeed intend to stay human. Sarajlić’s own siege in Sarajevo taught us that: there are only two choices, culture or barbarism.

As an editor and translator, I myself benefit from an additional privilege. I let other people’s words speak for me. In that, I’m like most of the rest of the planet; the difference is that, unlike you all, I have a backstage pass. So far, De Luca’s Decameron 2020 has posted three videos: Erri’s own story, read by the inimitable Julian Sands; a performance piece from top-shelf Italian writer, director, and actor Luigi Lo Cascio; and a tale from MR frequent contributor Tabish Khair, performed by perhaps India’s greatest actress, Shabana Azmi. But I’ve also had a glimpse of the coming attractions, and even helped translate a couple, so I have some idea of where this is going. Frankly, after the first ten, I wouldn’t mind having ninety more. Though anything but, as Erri himself anticipated, “a single sum or synthesis,” what emerges from this ensemble is a chorus of voices, each similarly and deeply engaged in meeting these dark times head on, in calling out to the world, reminding us all that we do still have choices, and that our common culture is worth preserving.

The alternative is clear; in fact, for the moment, it’s in charge.