- By Alex Valente and Jamie Richards 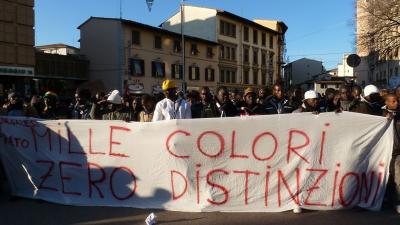 Gabriella Kuruvilla’s story, “That’s Life, Honey,” presents an array of narrative elements that are unprecedented in their native Italian context and certainly unusual in English. We have a teenage speaker, named Natasha, whom we indirectly learn—based on the sex workers lining her street—lives in a degraded area of a city; we also find out that Natasha is not ethnically Italian, but Indian, at least on her paternal side, and that she is haunted by a lost native language that causes her to speak the only language she really can, Italian, imperfectly. Her story is punctuated by her mother’s darkly humorous expletive, “negro di merda!,” used to express her dissatisfaction with everyone and everything.

The Italian word negro migrates onto the main character as negra and becomes pivotal to the story. The translation of racial terms is always a difficult issue, as they singularly embody national and cultural ideologies and histories, which rarely overlap neatly. In translating this piece, a primary subject of the back-and-forth between Jamie and Alex—both white translators—revolved around the glaring issues associated with translating this particular word. As a slur, would the English cognate “Negro” be appropriate, or is it not strong enough? Would there be any point in italicizing?

To Alex, as a Tuscan, the lexical question is one of the North—where the word never lost its ‘g’—vs the rest of Italy, since nero became the more acceptable term in the central and southern regions of the peninsula. Italian negro, in these regions and to his ears, is and can only be the n-word, never the English Negro (as it was used as a standard term in the early to mid-twentieth century in the US). In the story, given that the mother shouts it out as an insult, the word appears initially as something external and violent; the softer of the two didn’t feel like the best choice.

Jamie, on the other hand, didn’t think of it as much in terms of an Italian geographical divide, but more about the English: the specificity of the n-word makes it difficult to associate the Italian negro with it. It may be the closest thing, but in Italy it’s nowhere near as taboo and of course has a totally different history. Alex partially agreed with this assessment, though not entirely: in Italy, it’s unquestionably the Worst Word to describe anyone of a skin tone different from white. Though some colonized or colonizing Anglophone environments have used variations on the n-word to describe people of any non-white skin tone, geographical racism was not really part of the discussion—and this fact is worth noting, however, as both Kuruvilla and the character in the story are of Indian, not African descent. Similarly in Italy, ‘negro di merda’ is what is spray-painted everywhere on city walls, alongside racist slogans, swastikas, and fascist symbols—so then it's definitely, and unfortunately, the n-word.

This observation brought the discussion onto the right track, as not only is it a matter of whether to use the strongest word, but that the real force behind such uses of the n-word really are precisely the reasons not to use Negro—which no one really says in English anymore anyway, unless they’re Black themselves or in a Quentin Tarantino movie, and even then usually not as an insult. In Kuruvilla’s story, the main character calls herself ‘negra’ (and ‘puttana’, which was the focus of a secondary discussion about using ‘prostitute/whore’, rather than commonly accepted ‘sex worker’) by the story’s end—almost a full acceptance of the term and its connotations—and yet, most of her words are learned and acquired through how people have used them against her, as insults and slurs, internalized rather than reappropriated.

Though in Italian "negro" doesn’t have the full force or the history of the English n-word, the social context here, where the insult prepares, or even predetermines, the fate of the main character, definitely suggests that any softer alternative to the insult would weaken the story. Certainly racial prejudice isn’t copyrighted or trademarked with exclusive rights to an Anglophone context, and here it is about understanding racism in the Italy of today.

ALEX VALENTE is a half-Yorkshire, half-Tuscan award-winning literary translator and teacher. He holds a PhD in literary translation from the University of East Anglia and has worked on Elena Varvello’s Can You Hear Me?, graphic novel Violeta: Corazon Maldito, and upcoming How to Be a Fascist: A Manual, by Michela Murgia.