(Not Quite)10 Questions for Laura Glen Louis 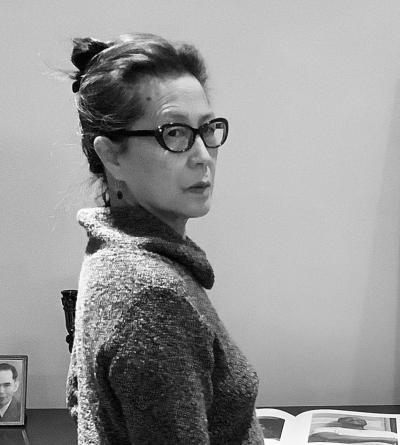 My brother, Victor, said that Mr. B was the only interesting teacher at our school, and that I might finally learn a thing or two. Because this brother never said anything more urgent to me than Get out of my room, I saw in his comments something akin to the hot and savory. For once Victor was right, but interesting didn't begin to portray the man. One needed a more complex word, something involute. Labyrinthine. One needed a ball of string and a torch.
—from "The Empirical Mr.B," Volume 61, Issue 1 (Spring 2020)

We asked Laura Glen Louis the same 10 Questions we ask our other contributors. She responded with following interview.

Why “The Empirical Mr. B”?
Each piece begins with a haunting. All haunting begins with loss. Here, the loss of innocence. A gifted teacher, yet he left teaching in shame. Fast forward a few decades: I woke one morning thinking of my best friend from grade school, the model for Josephine. I turned on the light, grabbed my notebook and wrote down everything I was hearing as if taking dictation. Two hours later, throat parched, I was finally spent. When we returned home from vacation there was a message from long-lost Josephine. “Hi, I’m in town. My mother is dying. Can we meet?” Josephine and Roy never had Mr. B for a teacher. I met them the following year, at a different school, a special class of sixteen handpicked students. Ironic that the teacher who was Mr. B set me on a trajectory that would land with me writing about his demise.

You read these stories, the serial rapist, the mass murderer. He was such a quiet neighbor. He fed our cats when we were away. We had no idea. People are complex. Even with our closest friends, our partners, we don’t ever know the all of them. The man dodged me for years. The only way to exorcize him was to write him out.

And the title?
It has a Marvel Comics superhero slant, childhood, innocence, a longing for mentor or model. Fallen angels also teach us.

Tell us about one of the first pieces you wrote.
Seventh grade English, a short story. A+/D. Mr. Dash praised me for my imagination (the A+) but said he couldn’t keep up, my plot careened left, right and sideways (the D). I didn’t attempt fiction for another twenty years. When Philip Lopate said, in his introduction to The Art of the Personal Essay, that they are by definition discursive, he ripped the straight jacket off the five hundred word expository essay crammed down our adolescent throats. Here was a form that allowed for the way my brain worked.

What writer/s or works have influenced the way you write now?
William Maxwell for tone, which is sensibility. He has such decency in his voice, and even just recalling it helps me check my cynicism at the door. Joan Didion for edge. Don DeLillo for ever nailing the human condition and without fanfare. You see it or you don’t. He’s already moved on. Many others. I’ve also been influenced by having been a poor reader. I read every word, and with that attention comes a demand that each word count, which is why I put down many books, and why short fiction and not novels. I don’t have it in me to be precise for three hundred pages.

What other professions have you worked in?
I’ve waited tables at the No Name Café, managed a boutique fabric store, kept the books for Peet’s Coffee, edited documentary and educational films, worked as an assistant on forgettable feature films, with the exception of “Amadeus.” What a class act, from its damask script to the foley effects for rustling taffeta. Ozu, Kurasawa, Ang Lee, Cary Joji Fukunaga. I was channel-surfing one night, was caught up, hooked, by this unassuming PBS drama. Pushing Hands. Who the heck directed this? Ang Lee. 1991, his first feature film. Six years later he gave us Rick Moody’s The Ice Storm. What these directors have in common is the care with which they reveal their characters’ inner lives.

Do you have any rituals or traditions that you do in order to write?
I turn on the light, grab a pen. We’ve all learned the hard way: write it down, or it’s dust.

Who gets the first read of your work?
A rotation of dear friends and family, astute readers. They may not always be able to articulate a problem or hint at solutions but I can count on being told when the writing fails the characters. I was cutting a documentary late one night, the building empty except for the janitor. I asked him for five minutes and sat him down in front of the Steenbeck. Afterwards, I thanked him, he left. Just having him in the room made me see the scene with fresh eyes. It was all in his breathing.

What are you reading right now?
I reread Calvino’s Invisible Cities. William Maxwell’s So Long, See You Tomorrow. DeLillo’s The Names (“Conversation is life, language is the deepest being.”). DeLillo is incisive, Calvino fills me with wonder, Fitzgerald and Maxwell write about loss in a deeply felt way that doesn’t shout. None of these works shout. Daniel Mendelsohn’s Ecstasy and Terror. Mary Gabriel’s Ninth Street Women, rich on so many levels. Susan Sontag, On Photography. Deeply considered. Roy DeCarava: A Retrospective, for his dark on dark.

You studied design. How did you veer from the visual to the literary?
I’m not sure. It might have been working on those forgettable films with forgettable scripts, the unconscionable cost of matte shots. The running joke was that we could make a half-hour documentary for the price of a single matte shot. I was burned out. I had no ambition to be a writer but the work just poured out of me. When I published my first stories I got a visit from a high school friend I hadn’t seen in decades. She said, “I always knew you’d be a writer,” an idea she’d thoughtfully kept to herself. “We were all trying to line up a date for the prom and you sat around trying to figure out why Superman killed himself.”

So you didn’t grow up dreaming of being a writer?
I wanted to go to the moon, a plan derailed by my myopia. After college I wanted to be a blues singer.

Did you, sing the blues?
No. But much later I became a choral singer. I was doing research for a short story where I had imagined a choral life for my character, and thought it prudent to attend a rehearsal to corroborate or refute my imagination. Two altos crossed over and asked if I was there to sing. Just looking. “Well, you’re here, you might as well sing. Can you read music?” They thrust a score in my hand. At break, I whipped out my check book. I had no idea of my hunger.

How does being a singer inform your writing?
Choral singing is a way for community after a day at the desk. Cross disciplines feeds the work. Other paints, other energy, other timbres. Other. Then, these songs and masterworks are set to lyrics, sacred texts, poetry. Singing is a deeper way of reading and experiencing and voicing literature. You don’t just read a book and move on to the next. You are studying music in service of these texts, and doing so for three or four months.

If not writing, what?
I’d love to have the conservatory experience, singing all day, studying theory, composition. I once took a week long workshop with Joseph Jennings and Chanticleer. Two 3-hr sets a day, solfege on the side, singing around the bar’s piano after evening rehearsals. Exhausting. And, heaven. But, I’m not well when far from writing. Writing is where I find my self.

Do you write about singing?
I have written essays about music. “Blissfully Unaware of Threat: On Reading Bernstein’s Chichester Psalms,” de-constructs that protean work. “Blue Monotone” tries to corral the breathlessness of singing in Yves Klein’s “Monotone-Silence Symphony,” an avant garde work from 1960 still startlingly and fresh. Essays, wanderings—we end up far from where we started. A short story wants to fulfill a premise set out on page one, but the personal essay is discursive, an adventure.

William Maxwell said when asked for his favorite poem (for Robert Pinskey’s “Favorite Poems” project) offered A. E. Houseman’s “Difugere Nives.” “All my life I’ve been saying two lines out of this poem, with pleasure, paying no attention to the sense at all and the lines are ‘Night holds Hippolytus the pure of stain, / Diana steads him nothing, he must stay.’ And if it were Greek or German or something else it would be the same. There’s something about the order of the words, the language, that moves me. I don’t think of it so much as meaning, I think of it as pleasure. As if I were listening to Schubert. Which phrases move my heart.” This is what I want from literature, from art: I want to feel. I want to be moved.