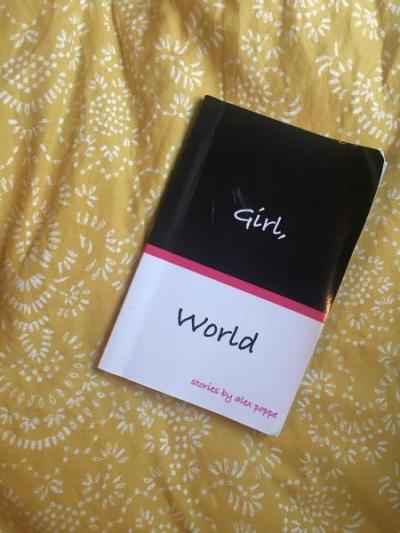 For better or for worse, “feminism” is in fashion. Spunky shirts proclaiming feminist slogans have become mass-market staples, allowing anyone (who can afford it) to “try on” feminism in a dressing room. Celebrity feminists tweet one-line proclamations to show their support of the movement—while generally directing their activism toward a palatable, majority-defined “woman”: often white, often cis-gendered, often able-bodied, often American. This sleek, whitewashed, marketable version of feminism is having its heyday while—beyond the $16.99 Feminist Distressed Graphic Tee—immigrant women and women of color, those living with disability, and non-binary folks, slip through the cracks. As this particular brand of feminist thought becomes increasingly—and conveniently—distributed through social media, the necessity of accessible, intersectional, feminist literature continues to grow.

Alex Poppe's vivid new collection of short stories, Girl, World, could have comfortably settled within the aforementioned commercial rendition of feminism. Poppe, a white, New York City expat who previously worked as a business analyst and film actor, now spends her days as a self-defined “teacher and creative instigator;” she has worked in Poland, Turkey, Ukraine, northern Iraq, the West Bank, Germany, and the United States. Indeed, Poppe structures the collection around characters who appear familiar—white and young—yet she pushes back against the mainstream expectations of feminist writing by moving beyond the boundaries of her own experience. Most of the collection asks readers to consider and immerse themselves in the lives of women who have been systematically oppressed, battered, and used by the world around them—women whose strength still manages to rise out of their situations. By putting her protagonists in situations outside of commonly publicized expectation, Poppe succeeds where western feminism has traditionally fallen short. She depicts the varieties of potential female experience, dismantling the “everyday” to instead build new narratives of what “normal” can mean.

Poppe begins the story “Family Matter” (pubilshed in MR's Fall 2016 issue) with an endearing scene of teenage protagonist Nastasia and her best friend Fico chomping on sour-cream-and-onion potato chips and dancing to “Single Ladies.” Nastasia appears to be a familier stereotype: white, highly educated, suburban. She lives with her father, described as a “research scientist” who “almost never single-tasks.” Threats to their normalcy emerge when Nastasia finds out that she came from an embryo that was created and genetically manipulated in a lab in order to enhance desirable traits. Poppe plays with ideas of neurotypicality, genetic modification, and ethics, while evoking a young woman’s experience of disorientation from the life she never had to question. The scenes where Nastasia raids her father’s files and discovers images of her biological mother resonate with poignant clarity:

When these pictures were taken, [my mother] was four years older than I am now. . . she looks like she knows who she is. Most of the time I feel like I am watching myself from the corner of the ceiling, shaking my head at all the stupid stuff I say. She isn’t the prettiest woman in the the room, but she’s the one you’d think about long after the party’s over.

Throughout the collection, Poppe’s strength lies in her ability to write short, utterly compelling fiction about difficult topics without sacrificing vibrancy and detail. In “My Mother's Daughter,” Poppe maintains tension through withholding: the female protagonists' situation—a forced march from youth to womanhood through brutal sex trafficking—is a reality the reader comes to understand slowly, without it being said. A truck bumps along the roads as the young girls fervently anticipate their new lives as "au pairs living in mansions" and  "waitresses in five star restaurants;" the thin illusion breaks upon emergence from the truck.

Poppe doesn't hold anything back: the narrative dives nose-first into the dirt, a world where "Home was a bare mattress behind a locked-from-the-outside door of a hidden pantry" or, for "those who tried to run away, home was the river bed of the River Bosna." Poppe creates a powerful depiction of girlhood, of youthful innocence "on the cusp of adulthood," and its struggle to survive the brutalities of life in the margins.

Poppe upends traditional narratives throughout her collection. In “Moxie," her narrator—a former model whose face is disfigured when a motorcycle bomb goes off at a photo shoot in Marrakesh—asks, "Is it cheating or using or just the shit that happens when you yell out someone else's name during sex? What if your partner has had half her face singed and shredded? Can you ask her to wear a bag over her head or to turn her head so only her good side shows? Do you do her from behind or do you leave her behind?" Poppe turns the dominant western feminist critique of modeling on its head, complicating the typical objectification of female and feminine bodies by portraying a character whose history of disabling trauma has generated an unusually complex relationship with her looks.

“Moxie”’s protagonist talks about her physical characteristics with a bluntness that's simultaneously funny, jarring, and heartbreaking. "I will probably never have gentle sex again," she remarks. This story, in particular, exemplifies Poppe’s dark humor and sarcasm, which run throughout the collection, as her characters deliver caustic observations with fervent energy. The empathy and subversion in Poppe’s writing are apparent from the first page, and lingers in the reader's mind long after the collection ends.

Poppe's stories range from the disconcerting to the tragic, the familiar to the strange, yet somehow she manages to deliver narratives that are wholly fascinating. She doesn't depict all women, of course, but she moves beyond the familiar to push on the definition of female empowerment. Girl, World resonates thanks to Poppe’s decision to challenge a generic trend toward narratives of privileged, able-bodied, white, middle- and upper-middle-class cis-women. Instead she asks readers to pay attention to the lives of those less visible. Ultimately, Poppe shines a light on a different kind of feminist awareness, one that explores how women survive, even when no one is watching.

KATHERINE KEENAN is a student at Smith College, and a 2017 intern for the Massachusetts Review.