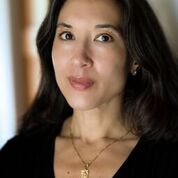 We speak sparingly      to ourselves      indulging instead a devotional of lists
soft tyranny of small needs      abject and quotidian      underneath which
the broad sweep of desire      our machinery grinds      for poverty
—from “Letter for Elena Ferrante: Devotional,” Volume 60, Issue 4 (Winter 2019)

Tell us about one of the first pieces you wrote.
The very first poem I published was in high school—in Dans Le Vent, my school's French Journal. I was studying French, so I submitted this terrible poem called "Le Jardin de Printemps," filled with cloying images of flowers dancing on grass. I actually shared it a few years ago at a reading for fun. Dreadful, but it did make me remember how my friend used to ask me to recite the poem over the phone in my French-est French accent. We would laugh so hard. I can only imagine how bad it sounded. Still, I think that experience put me on the path to later studying French at the Sorbonne and going on to do my masters in French Literature. It made me feel like I could write.

What writer(s) or works have influenced the way you write now?
The French writer, Marguerite Duras, was an early influence during my teenage years. The spare and fragmentary aesthetic of the "new novel" and her vision of women as complex, charged beings was compelling to me as a teenager. Since Duras's writing style and syntax are straightforward, I got it into my head I could try reading her work in French. I did and that made me realize I had a long way to go, but put me on the road to continuing my study of the language.

I spent most of my life reading short stories, fiction, and essays and really only began reading poetry once I started writing it during college. I've always loved Raymond Carver, Thomas Hardy, Anne Sexton, Anne Carson, Emile Zola, Rimbaud, Jeanette Winterson, Lydia Davis, Rebecca Solnit, James Baldwin, Toni Morrison, Robert Creeley, Gary Snyder, and a ton of poets writing right now. Too many to name, but there are so many amazing people in our midst.

What other professions have you worked in?
I began waiting on tables as a teenager and worked as a waitress for years. After graduate school, I worked in the Rape Crisis Center at St. Vincent's Hospital in NYC.

Then, I became an English, French, and Creative Writing teacher at a private school in downtown New York. I eventually left that job to work as a visiting poet in the public school system through Teachers & Writers Collaborative. That was my favorite kind of work. When I moved to Providence with my husband and baby son, I missed working in the public schools, so, in 2008, I started Writers-in-the-Schools, RI. I've been doing that ever since.

What did you want to be when you were young?
Atticus Finch, or a foreign correspondent.

What inspired you to write this piece?
This poem, "Letter for Elena Ferrante: Devotional" is one of series of epistolary poems I wrote, many of which are collected in a book, Dear Elena: Letters for Elena Ferrante. I really love Ferrante's work and went through a period of reading everything she wrote. When I had read all there was to read, I felt somewhat bereft, so I began writing these little missives to her.

They are reflections on being a woman, on writing and language, and relationships—in connection to themes in Ferrante's work—though I don't think one has to know her oeuvre to enter the poems. "Letter for Elena Ferrante: Devotional" was written after I acquired a copy of the devotional book that Joshua DuBois, Barack Obama's Pastor-in-Chief, created for Obama during his presidency. I was thinking about the practice of writing, the daily practice of meditating on a precept, acts of devotion.

Is there any specific music that aids you through the writing or editing process?
I listen to a lot of disco and old hip-hop. And Bowie and The Clash. But I can't listen to lyrics while I am writing—too much interference. If I don't feel like having total silence, I listen to Vivaldi.

Do you have any rituals or traditions that you do in order to write?
I need to swim. I think and write while swimming laps. When I get to my locker, I write notes. Sometimes I read a poem, before I begin my swim in order to revise it. I also need to walk. Same process. Only on land.

Who typically gets the first read of your work?
I generally write in a vacuum. It's rare that someone reads my work before it's published, except, of course, editors who decline or accept it. It's not how most writers work and it's probably not ideal. I didn't study creative writing and I am not in the habit of sharing and getting critical feedback. I really only took workshops once I became a published writer. I always say books were my teachers. I went about it all somewhat backwards.

Recently, however, I've been sending work to a couple of friends. I find it's good to have poems out there, to create energy around the writing. That sounds a little flakey, but I find it helpful, or maybe heartening is the word. I have to push myself to do it, because I prefer the act of writing more than the sharing. But I have smart friends and they always have helpful insight.

What are you working on currently?
I am working on a collection of personal poems using political speech called Dog Whistle. It's about layered language, poem-writing, political/emotional messaging—the forms they take—and about being a woman, grief, and America.

What are you reading right now?
L'Enfant Perdue, which the final novel in Elena Ferrante's Neapolitan quartet (otherwise known as The Story of the Lost Child). I was reading the series for a second time and finishing up the third installment when I came across the fourth in a bookstore/bar in Paris. It was the first book I spotted on the shelf and seemed fortuitous, so I bought it. I hadn't read a novel in French in years; it's been a real pleasure.

I'm always reading three or four books at a time, which is wonderful and a little frenetic. Today I'll finish Department of Speculation by Jenny Offill, which is brutal and funny and brilliantly structured. Also, Trances of the Blast and Collected Poems, both by Mary Ruefle, and some superb Fanny Howe.

Tonight, I'll start We, The Animals by Justin Torres. I read this novel when it came out and loved it. Since I just discovered there's a movie, I have to re-read it before watching the film adaptation. I can't wait!

TINA CANE serves as the poet laureate of Rhode Island, where she is the founder and director of Writers-in-the-Schools, RI, and an instructor with the writing community, Frequency Providence. Her poems and translations have appeared in numerous publications, including the Literary Review, Two Serious Ladies, Tupelo Quarterly, Jubliat, and The Common. She also co-produces, with Atticus Allen, the podcast Poetry Dose. Cane is the author of The Fifth Thought, Dear Elena: Letters for Elena Ferrante, poems with art by Esther Solondz, Once More with Feeling, and Body of Work. In 2016, she received the Fellowship Merit Award in Poetry from the Rhode Island State Council on the Arts.