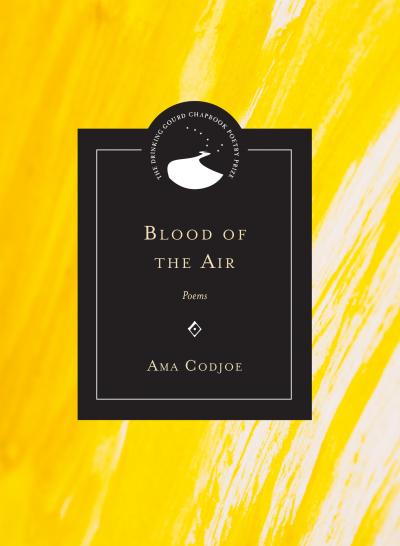 A few times a week, Yiadom-Boakye
painstakingly cuts oil paintings she believes
aren’t up to snuff. Instead of re-priming
the canvas, she reduces it to 2 X 2 ½-meter
pieces. She begins again. This isn’t
an ars poetica. Once, I made love in daylight.
—from “Poem After an Iteration of a Painting by Lynette Yiadom-Boakye, Destroyed by the Artist Herself,” Volume 60, Issue 4 (Winter 2019)

Tell us about one of the first pieces you wrote.
Just the other day, my mother mentioned, by name, a poem I wrote in high school. What’s special to me is that she remembers it.

What writer(s) or works have influenced the way you write now?
There seem to be at least two murkily distinct categories of influence: writers whose work I can’t live without and writers who I read during the act of writing. The former includes authors such as Lucille Clifton, C. D. Wright, Sharon Olds, Mary Szybist, Gwendolyn Brooks, and Toni Morrison. Then there are writers I consistently reread while engaged in the act of writing. They are riskier than me, more verbose than me, “wilder”—if I try to move closer to them through my writing, I move about an inch away from my habits. A worthy inch. Some of those poets are Brigit Pegeen Kelly, Terrance Hayes, Diane Seuss, Carl Phillips, Larry Levis, Gregory Pardlo, and Vievee Francis. There is, of course, overlap: writers whose books I’d take to a desert island and whose work I’d reread while writing on said island. I’ll keep that list to myself.

What other professions have you worked in?
I’ve been an educator in some, way, shape, or form most of my life. I’ve taught ballet, jazz, dance and theater history, pre-college enrichment, arts and activism, and creative writing. Currently, I facilitate social justice, anti-oppression, and leadership trainings for teaching artists, university faculty and staff, grantmakers, museum educators, arts administrators, classical musicians, parent groups, and public school teachers.

What inspired you to write this piece?
Lynette Yiadom-Boakye is a painter whose work I greatly admire. She creates these gorgeous, intimate paintings, often in a day. If she doesn’t like a piece, she destroys it and attempts to revise by making a new painting. At the time I wrote this poem, I was thinking about the idea of iterations and the title “Poem After an Iteration of a Painting by Lynette Yiadom-Boakye, Destroyed by the Artist Herself,” came to mind. It’s unusual in my process that a title comes first. This time, I let the title lead me.

Is there a city or place, real or imagined, that influences your writing?
Although my answer is no, I’ll take the opportunity to say how grateful I am for the communities and friendships that nourish my writing. To choose just one example: I wouldn’t be the poet I am without Cave Canem or without Aracelis Girmay, the first person to say “Cave Canem” to me.

Do you have any rituals or traditions that you do in order to write?
I love to have stacks of books around me when I write. Reading while writing is a different kind of reading. If I’m at a residency, I will check out dozens of books from the local library in whatever town I’m staying. The excitement of reading “new” work—which could, in fact, be centuries old—propels my writing. I’m not scared of being influenced; I crave it.

Who typically gets the first read of your work?
I have a few mentor-friends who are gracious enough to read my work and offer feedback. I am also lucky enough to share poems with Donika Kelly and Nicole Sealey, usually over the phone. They share their new poems in return.

If you could work in another art form what would it be?
I’d be a singer. I still may be.

What are you working on currently?
Poems . . . one at a time.

What are you reading right now?
It's not unusual for me to have the maximum twenty-six holds at my local public library. One built-in pleasure of requesting books from the library is that when they arrive it feels like a gift, almost a surprise, crafted especially for me. Currently I am reading Nelson Mandela's autobiography, Long Walk to Freedom and Firsts: A century of Yale Younger Poets, edited by Carl Phillips. I can't wait to read Cathy Park Hong's Minor Feelings—a library copy is already on hold.