- By Paul Dennis, In Conversation with Stan Sherer and Peggy and Murray Schwartz 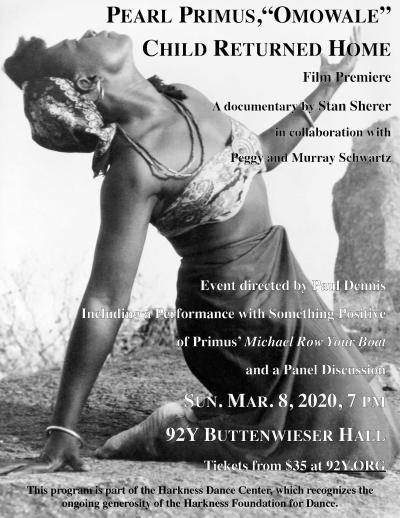 (Documentary Poster, Courtesy of the Archive of the American Dance Festival)

Pearl Primus, Omowale, Child Returned Home is a new documentary by Stan Sherer, in collaboration with Peggy and Murray Schwartz, authors of the Primus biography, The Dance Claimed Me: A Biography of Pearl Primus (Yale, 2011).

Pearl Primus (1919-1994) blazed onto the dance scene in 1943 with stunning works that incorporated social and racial protest into her dance aesthetic. Stan Sherer created the documentary using archival materials, many of which have never been seen before. The documentary unfolds her life as a creative force and educator, transforming African rituals to stage performance throughout her long career. In this interview, the filmmaker and biographers discuss the documentary with the dancer and regisseur Paul Dennis, who has performed Primus’s solos “Hard Time Blues” and “Negro Speaks of Rivers” and is one of the few people who restages Primus’s early solos. There will be a premiere showing of the documentary, including a performance and panel discussion at the 92nd St “Y” in New York City, on Sunday, March 8th at 7:00 p.m.

Paul Dennis:                     Stan, what brought you to this project? What first attracted you to Pearl Primus and made you interested in doing this film?

Stan Sherer:                     We first met Pearl in 1984, when she arrived as a Five College professor. Her office was next to Marjorie Senechal’s at Smith College. They became very good friends, especially because Pearl loved Marjorie's dog. Subsequently, we all became very dear friends. When Marjorie and I married, Pearl graced us with her presence. I worked with Pearl in Barbados to document the elevation of the Bishop Granville Williams to Archbishop.

Pearl was a very important part of our life. When Peggy and Murray wrote the biography, as you know, they collected a large amount of materials—audio recordings, photographs, videotapes, papers, etc. Years later, Peggy and I talked about making a film using her extensive materials. My thinking was to make the film in Pearl's own voice because we had recordings of her speaking, telling stories, giving interviews, and presenting talks.

Murray Schwartz:           We had known Stan’s other films and thought that his plan to create an homage to Pearl was a fine idea, one that would make the best use of the material Peggy had collected but hadn't been put into creative form. So, we were really quite happy about his idea of making a film—an audiovisual record that would not necessarily follow the biography but would celebrate her achievements over a very long period of time.

Peggy Schwartz:              And I was just thrilled. I had several cartons full of videotapes, DVDs, recordings, records, all sorts of material, audio and visual. And there were others approaching me to do some sort of documentary, but they weren't people who had immediate connections. We were warm friends with Stan and Marjorie through Pearl, and when Stan said that he wanted to do an     homage for Pearl, I said, "Oh, hallelujah." I knew that was the way to go and just couldn't wait to get all the wonderful material to Stan. That was the beginning of the collaboration.

SS:                                      This was the most difficult process, because the material was quite extensive, diverse, and of varying qualities. I spent weeks sifting through the material to determine what would be usable. What were the themes that we could tie together here? I didn't want the film to range over everything. It needed to have a tight focus. I was thinking that perhaps Pearl’s work in Africa should be the focus. Maybe there are three or four films here, each about 20 to 40 minutes, that would form a series.

In the end, I decided we could make a single film that would speak about her beginnings, how she got into dance, explore some of her thinking along the way, add some commentary by other people, and include footage of some of her most famous dances.

SS:                                      I had to digitize the videotapes. To improve the quality, I did apply some sharpening here or there, but all that grain and the noise is integral. I did quite a bit of work on the black and white footage that Pearl filmed in Africa. I enhanced the tones, added contrast, and made a very overexposed sequence viewable. Some sections were completely faded out, and I was able to bring back some detail. Those films from Africa are amazing and invaluable.

MS:                                    Yes, I saw a consistency that I hadn't quite seen so clearly before—the way she was always a teacher. In the first Africa clip, she is teaching young students in a field. It's not an accident that she perfected the lecture demonstration for schools and universities. Even the protest dances are a form of teaching.

MS:                                    And it's not just moving a dance from one setting to another. It's transposing a ritual performance to a theatrical context that respects its origins. She wasn't trying to appropriate African dance but to transpose it. But this wasn't always understood by her critics, whether they were American, European, or African.

PS:                                      That’s a moment that I find overwhelmingly moving every time I see it. The tape of that concert was given to me by John Tunisi Davis, a drummer. It’s a videotape filmed from the back of the Riverside Church theater with a handheld camera. That was the last series of performances that Pearl and Percy gave before he died. She introduces each dance with a lecture about where it's from and what it means. She introduces “Michael Row the Boat Ashore,” by talking about the Birmingham church bombings and the four children who were killed. I always get choked up even talking about it. Pearl tells us there was one mother who could not cry, and until she could cry, she would not be able to move beyond this horror. Pearl then takes a few steps and sits down on a chair. Next comes the transformative moment that I'm always so moved by: she becomes the mother. Then two of the dancers come and move her into the stage space. It's an extraordinary performance.

PS:                                      Nothing that can be the same as actually seeing her dancing in an African field, with a group of young African drummers intent on her every movement. To see where this all started and the incredible joy in her body, in her jumps and spins, is just thrilling. It's not the best footage, but my goodness, it's such a gift to see what Stan was able to do with it and to know that it will be preserved.

PS:                                      One of the greatest gifts to the field, I think, is that full performance of Pearl performing her “Fanga.” “Fanga” has become internationally known, and it's been changed this way, that way, and every which way. She's often credited, which is wonderful, but not for this particular dance. In this concert, the whole of “Fanga” is there, with her performing it. I think that is a tremendous gift to the field. Oh, I'm just so happy with that.

MS:                                    Stan’s film is an answer to the question, “Why did Pearl’s choices not make her famous as other dancers were, both black and white, in the second half of the 20th century?” I have to say, even though it's a little bit self-congratulatory for Peggy and me, that the biography has finally begun to give Pearl the prominence that she deserves. This film will make that even more possible. It will enhance the process of teaching, not just as a celebration of what she did.

PS:                                      And I have to add, I'm so appreciative to Tunisi Davis for the videotape that he sent in the mail. He was one of Pearl’s drummers and her good friend. He lived in Connecticut at the time I met him. He told me that Pearl had gone into hiding, into reclusiveness. Percy was teaching in Upstate New York at SUNY Binghamton, she was in New Rochelle, and it was a rough period. She and Tunisi would go on long drives. He joked that it was a little bit like Driving Miss Daisy. Talk would come easily. They would drive and drive and they would just talk.  When you're both looking forward, you're not having to look at each other, you're driving, you're riding, you are just talking. In time, he told her that she really had to come back, out of hiding.

Tunisi made me a gift of the tape of the Riverside Concert. This was many years ago, afterwards we lost touch. But I will always have tremendous gratitude for the gift of that tape . . .  It is a truly priceless contribution to our field. There's nothing else of her in motion like that. It's the full concert. Give thanks! 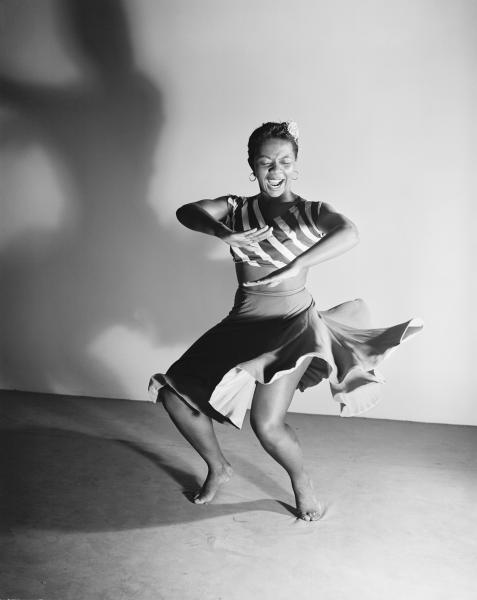 (Photograph by Barbara Morgan, Courtesy of the University Museum of Modern Art, University of Massachusetts Amherst)