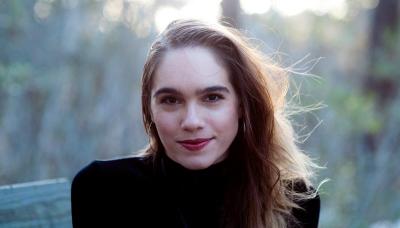 A wine crate for a nightstand, and on it, a rose
gone bad in a cup. Its water

Tell us about one of the first pieces you wrote.
I began writing poems very young—as soon as I knew how, really. I’ve kept journals at every stage of my life, and my Kindergarten journal has some gems in it. My favorite is a poem about cheetahs. It’s more or less a list of all the adjectives I knew at that age, so an exercise in rudimentary epistrophe—“big cheetahs, shy cheetahs, silly cheetahs”—and ends with “but best of all are BABY CHEETAHS.” I read this now as a declaration of love for my own young self, which makes me smile. (Babies are the best!) There are some pretty adorable drawings accompanying it, too.

What writer(s) or works have influenced the way you write now?
I’ve been shaped by so many writers, but there are certainly some whose work I return to again and again, and so I’m sure their influences can be seen in my own. I carry with me Louise Glück’s Collected Poems (1962-2012) whenever I travel, because no matter how many times I’ve read it, I learn something new each time I crack it open. I think she’s absolutely brilliant. Similarly, I reread Mahmoud Darwish’s work multiple times a year. I also owe an enormous debt to Sharon Olds, Marie Howe, and my mentor Dorianne Laux, whose poems were my first and forever favorites, and whose bravery, honesty, and tenderness serve as examples for the kind of work I want to write and the kind of writer I want to be.

What did you want to be when you were young?
When I was five, my mother forbade me from watching Jurassic Park, so of course I did, and that kicked off my lifelong obsession with dinosaurs. It also inspired my first job interest: I very much wanted to be a paleontologist. A few years later, my focus shifted, and I dreamed of becoming the first female president. I was involved in my schools’ student councils and was class president, but this interest waned when I realized, during my post-9/11 adolescence, that being female was likely the least of my hindrances in becoming president.

Throughout my childhood, writing was my greatest passion and constant activity, but I didn’t realize you could write as a profession. (It all seemed very mysterious to me, and I thought all published poets were dead.) I decided to become a teacher because I thought sharing my love of writing with students would be the closest I could get to a career involving writing.

What inspired you to write this piece?
In my early twenties, I was very ill. I had two uterine tumors, one of which was thought to be a sarcoma, and I suffered from severe bleeding and pain for two and a half years. As terrifying as the prospect of cancer was, most of the time I was preoccupied with the daily discomfort—and shame—of blood. It was something I couldn’t talk about openly, something that wasn’t considered polite or appropriate conversation. It was isolating. In that isolation, I sought comfort, and became increasingly engrossed in religion, particularly in the figure of Mary, whom I saw as both my opposite (chaste and chosen by God) and my kin (a young woman whose body was subjected to forces outside of her control).

As for this poem in particular, it did, more or less, happen—while living in Oakland, California, at twenty-two, I did have a mattress on the floor of my apartment and I did one day wake to a hemorrhage. I was humiliated. I will never forget the shame I felt looking at the broad stain, how helpless and angry and scared I was. It looked as though somebody had been killed. Even now, I feel shame writing this, admitting it was me on the mattress, that the blood was my own. I wrote this poem to face that shame, to give it a house to live in. And I wanted to acknowledge that there was some beauty in it, some artistry, at least a little bit, in the quiet moment before and in my body despite its circumstance, that someone looking in from the outside—God, of course, I always mean God—could see with their distance.

Is there a city or place, real or imagined, that influences your writing?
I often find myself writing about water—the ocean, likely because I’ve spent my life crossing it each summer, and the Mediterranean sea, where I spent those summers along the shores of Tunisia. Tunisia itself appears in my work as well, specifically the small town of Hergla, where I’ve spent my adult summers. My father’s eldest brother has a home there, and I spend a month each year—this past one being the first exception in a long time—writing while looking out at the water. I’ve done a significant amount of writing there, and the landscape makes its way into the work.

Do you have any rituals or traditions that you do in order to write?
I’m a morning writer! I usually try to write as soon as I wake up. I’m freshest then, and it tends to be quieter in the early hours. Generally, I begin by reading—a book of poetry, typically, or sometimes a text I’m using for research. I also keep a journal in which I write down quotes, words, ideas, that sort of thing, and I sometimes flip through it to see if anything strikes me. I write from 7 AM until about 3 or 4 PM these days.

Who typically gets the first read of your work?
Journal editors! I don’t usually send my work to other people, not out of shyness, but because I like to sit with the poems and puzzle through them myself.  I do, however, take part in a monthly writing group with some friends, most of whom are fellow graduates from the MFA program at North Carolina State—Tyree Daye, Bryce Emley, Samuel Piccone, Rebecca Bornstein, and a handful of others who come in and out. Every other month, we write a poem every day of that month and send them to each other by the evening, without comment or apology. We’ve been doing it for about a year and a half now, and it’s a great way to honor our commitment to writing no matter where we are or what we’re doing in our lives. It’s also a really lovely way of keeping in touch—by seeing each other’s poems, we get a glimpse of what everyone is currently working on, obsessing over, or trying out. It’s also helped us each produce a pretty ample body of work to tinker with in the “off” months, and some of those poems do make it out into the world. Both of my chapbooks, and a considerable amount of my full-length in progress, include a substantial number of poems that began in that monthly poem-a-day. This poem is one of them!

If you could work in another art form what would it be?
I’d love to be better at painting, because I’m terrible at it, but I don’t think I’d like to actually be a painter as a profession. I think I’d like to be a singer or a photographer. Music is wonderful because I feel it comes closest to the emotional work I’m trying to do with language, and photography because I have an obsession with documenting life as it is, as it passes.

What are you working on currently?
I am currently working on my full-length manuscript, which this poem (“Still Life with Hemorrhage”) is a part of! It’s involved a fair deal of research, so I’m parsing through that right now and deciding what else needs to be in the book. Working on this project has been an exhilarating experience. I’m excited both by the work that’s complete and the work that has yet to be done, and I feel that’s a very good place to be in.

What are you reading right now?
I’m always reading four or five books at once, and I have a massive stack of books from the library waiting, but as of today I’m reading Kimiko Hahn’s The Narrow Road to the Interior, Carolyn Forché’s Angel of History, Nick Flynn’s My Feelings, and my very dear friend Tyree Daye’s River Hymns.

LEILA CHATTI is a Tunisian-American poet. The recipient of a scholarship from the Tin House Writers’ Workshop and prizes from Ploughshares’ Emerging Writers Contest, Narrative Magazine’s 30 Below Contest and 8th Annual Poetry Contest, and the Academy of American Poets, her poems appear in Best New Poets, Ploughshares, Tin House, Narrative, Georgia Review, Missouri Review, Rumpus, and elsewhere. She lives in Provincetown, MA, where she is a writing fellow at the Fine Arts Work Center.