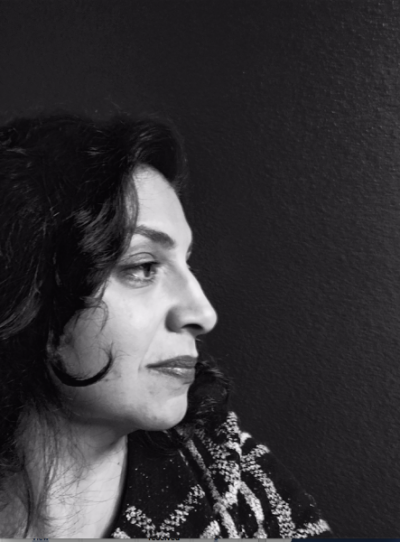 “1936
The year your grandmother swallowed her gold coins

safe, keep parts
of yourself in different boxes

Tell us about one of the first pieces you’ve written.
I worked for several years on a poem about a friend of mine who survived incarceration and torture during the first Palestinian Intifada. The poem is in my book, Water & Salt.

What writer(s) or works have influenced the way you write now?
It's difficult to overstate the influence of the forms and vocabulary of Mahmoud Darwish's poems. Naomi Shihab Nye, Adrienne Rich, Gwendolyn Brooks are important to me, as well as several poets I've read in translation--Lorca, Neruda, especially the Heights of Macchu Picchu. Arab poets including Badr Shaker Al-Sayyab, Abdel Rahman Al-Abnoudi, and Nazek Al Malaika. The poems of Fairuz's songs.

What other professions have you worked in?
My first job ever was at Pacific Science Center in Seattle, doing interactive demonstrations for museum guests. I've been an English and writing teacher, and I've worked as a community organizer for many years.

What did you want to be when you were young?
A writer.

What inspired you to write this piece?
I had a conversation with my father, who was born in Jerusalem, Palestine, in 1938. He was giving me instructions about a safe in his apartment. In my, mind the conversation bled into another we had earlier about the family tree, and I was struck by how the cadence of his voice changed when he spoke of numbers, dates or combinations. The contrast in sounds is where the poem began.

Is there a city or place, real or imagined, that influences your writing?
Yes, absolutely. Places I belong to for having lived there or visited, especially places where my family is rooted. My father's Jerusalem, the Amman of my childhood, the Damascus of my grandmother's stories and cuisine and accent. In early childhood, we lived in Jeddah, Saudi Arabia, then a small and picturesque city on the Red Sea coast. I haven't been there since 1986 so I have no sense of what it's like today. Almost every weekend, my family would pack a thermos of tea with mint, pick up fresh baked  mana'eesh--zaatar bread--and head to the beach. My mind is a conch shell, the sound of the waves eternally crashing against that coastline, the fragrance of mint tea and zaatar always present.

Is there any specific music that aids you through the writing or editing process?
I listened to a lot of Fairuz writing my most recent manuscript, Notebook of an Unravelling. I have some playlists that help me disconnect from the day-to-day before I write, but I tend to write and edit in silence. Silence is an amazing luxury.

Do you have any rituals or traditions that you do in order to write?
Preparing coffee is as close as I get to a ritual. When the weather is nice, I like to spend time in the garden before I write, but I live in Washington state, so this is a seasonal ritual.

What are you working on currently?
I just completed a manuscript this spring so I'm beginning very slowly to take notes without a specific plan in mind. This too is a luxury.

What are you reading right now?
It's Ramadan, so I'm taking the time to savor some of my favorite suras in the Qur'an, especially Sura 55, the Merciful. I'm also reading Phrasis by Wendy Xu, Whereas by Layli Long Soldier, and a novel by poet Hala Alyan, entitled Salt Houses.

LENA KHALAF TUFFAHA writes poetry, translations, and essays. Her work has been published or is forthcoming from the Kenyon Review Online, Lunch Ticket, Borderlands Texas Review, Lake for Poetry, Sukoon, and the Taos Journal of International Poetry and Art. Her poem “Running Orders” has been translated into Hebrew, Greek, Italian, Spanish and Norwegian, performed at anti-war protests around the world, and anthologized in Letters to Palestine. Her first collection of poems, Water & Salt, is forthcoming from Red Hen Press.