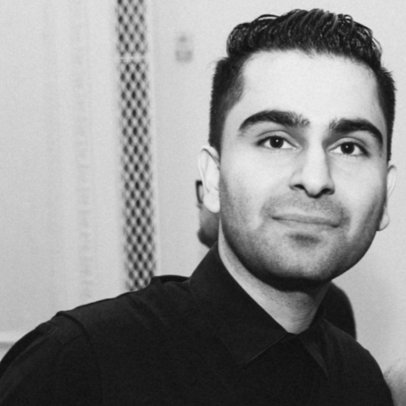 “Amin didn’t see him. The brake pads clenched, lifting Amin out of his seat, and then he saw the child.

Since dashing into the path of danger, the little boy hadn’t moved. He was seized by a question, and the force and authority of its asking was the closest he would come to being touched with revelation. And though the child understood the question and its implications with terrific clarity, his was an understanding received through feeling rather than thought, through the vertigo of his frame of reference collapsing, its grounding assumptions giving way. In fact, his mind barely managed a few failing words. Could this happen? was only a partial, and utterly inadequate, interpretation of the question that gripped the boy.”

Tell us about one of the first pieces you’ve written.
When I was young I liked horror and medieval thieves. I vaguely recall a Monster in the Basement in first grade and later, several aborted tales of various Maliks and Mikhails who all, more or less, thieved in the shadows. Middle-school was definitely a “small towns are terrifying” phase.

What writer(s) or works have influenced the way you write now?
I have no way to gauge any impact on the page, but I’m in intimate conversation with these writers’ prose and ideas: Zadie Smith, how she constructs moments within a subjectivity, especially in NW and On Beauty; Kafka, his force, despite (or because of) the instability of his text’s meaning; Junot Diaz, every story in and the overarching structure of Drown; Toni Morrison, her language, use of form, and complex explorations of goodness; and I often return to the breathtaking prose of a short story by Josh Weil, The Point of Roughness.

What other professions have you worked in?
I’m actually a Software Engineer. Reading is a nice come-down from work. Writing is an excruciating stress-multiplier for everything.

What inspired you to write this piece?
I had been married nearly a year and life was so blissful that I became anxious it would somehow come undone. I fixated on the ways our life could careen into tragedy. While this anxiety was germinating into an idea, the sermon of two Friday prayers, months apart, centered on adversity. In both cases, the imams iterated that adversity is a given in this life, and spiritual practice isn’t about staving off adversity, or even staving off sadness. It’s about pushing back on despair. So I wanted to explore a Muslim’s attempt to negotiate trauma and immense pain. Coincidentally, a month after I finished the story, my mother fell ill. And two months later, with great difficulty, my family and I said goodbye to her.

Is there a city or place, real or imagined, that influences your writing?
I grew up in a sprawl of suburbs west of Toronto called Brampton. This immigrant-majority town of half a million, though utterly uninteresting to those living there, contained, for me, so much that is weird and tragic and wonderful. Many of my ideas stem from an intense experience there. Then there’s Istanbul and Lahore, both of which have expanded my imagination in ways I haven’t figured out yet.

Do you have any rituals or traditions that you do in order to write?
I like absolute quiet or café ambiance without intelligible conversation. A coffee or mocha. Hours of night ahead of me, ideally. For some reason, Word Processors feel so permanent and unforgiving to me. Returning to pen and paper helps me shake any stiffness. Though no one else can read my writing, the little slashes speak to me.

Who typically gets the first read of your work?
A few close friends, a poet friend, and my wife, Sara. No one can read your work for the first time again, so I try not to waste first impressions.

What are you working on currently?
I’m writing a short story that takes the form of an excerpt from a journalist’s memoir. Beyond that, I’m conceptualizing a collection of linked stories.

What are you reading right now?
Recently read: Saidiya Hartman’s Lose Your Mother, a tremendous work demonstrating how the personal can enrich scholarship; George Saunders’ Lincoln in the Bardo is stunning and beautiful and I’ve always hoped a novel like this could exist; the late Mark Fisher’s The Weird and The Eerie, as well as Capitalist Realism—his combination of social and art criticism was inimitable.

AHSAN BUTT was born in Toronto, is of Pakistani descent, and currently lives in Los Angeles. His writing has appeared or is forthcoming in One Throne Magazine, Pacifica Literary Review, The Offing, The James Franco Review, and elsewhere.