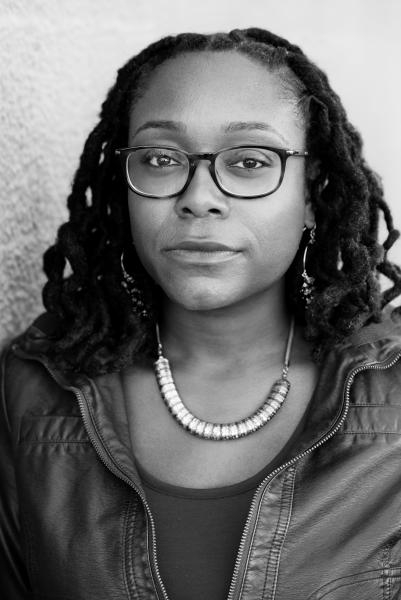 “Say, white girl,” Liana could hear the brown-skinned girl behind her whispering in the middle of Pre-algebra. She knew she was calling for her, even though Liana wasn’t white. At the old school, everybody knew Liana’s daddy was Creole, that her mother was light-skinned black. Also, at her old school, there had been other girls like her, girls whose hair touched their butts and swung back and forth when they jumped rope. But when her daddy moved out, her mama had to transfer her to Eleanor McMain Magnet, and she was the lightest girl here by a long shot.”

Tell us about one of the first pieces you’ve written.
The first piece I ever wrote was a poem. I was in the 4th grade at a Catholic school so I suspect the piece was of a spiritual nature. I remember reading it to my father when I was done, and he reacted like it was award-winning work. I believed him and decided I would become a writer. Years later I read the poem, which he saved, and realized how very age appropriate and basic it was. But I think he saw a flicker of something in it that seemed special and worth encouraging.

What writer(s) or works have influenced the way you write now?
I could only hope that the historical and social insights of Toni Morrison and Edward P. Jones; the intricate character development of Elizabeth Strout; and the lyricism of Edwidge Danticat and Jamaica Kincaid have somehow been incorporated into my own work.

What other professions have you worked in?
I worked as a lawyer for a few years and actually really liked the work itself but not the specific environment I was in. If it weren’t for the latter issue, I’d probably still be doing it because I loved the mental precision and rigor the field required.

What inspired you to write this piece?
I have a cousin whom I always admired. She is African American but has extremely fair skin. I am dark-skinned, and I was so infected with colorism as a child I assumed because she had lighter skin that her life was perfect. Years later, she told me she hated her skin color, that her blackness was always being challenged, and even that she hoped her children would be darker so that they wouldn’t have to go through what she’d gone through. It was hard for me to imagine someone bemoaning a quality I thought would have made life easier so I wanted to delve into what it might feel like to think of light skin as a burden.

Is there a city or place, real or imagined, that influences your writing?
New Orleans is the first place I ever lived so even though I moved when I was 12, I had already soaked up all the city’s details: the first phone numbers I memorized were “504” numbers; I still know the television stations; I know how to cook the food; I know the nuanced way people talk to each other; the way they dance; the way they look even. New Orleans is independently one of the culturally richest cities in the world but for me it is also the site of my formative years so my most meaningful memories are rooted there.

Is there any specific music that aids you through the writing or editing process?
I like to listen to Lauryn Hill when I’m in the thick of a writing project, particularly her first album, The Miseducation of Lauryn Hill because it embodies the creative spirit of someone who’s just coming out and who’s still raw and innocent but who’s opinionated and prolific.

Do you have any rituals or traditions that you do in order to write?
Not really. I write on my unmade bed when my children are at school.

Who typically gets the first read of your work?
My husband can tell when something is a story and when it’s not so Ialways show him my work first so I don’t waste too much time on something that’s not textured enough to hold a reader’s attention.

What are you working on currently?
I’m anticipating the debut of A Kind of Freedom, my first novel, which will be released by Counterpoint Press on August 15th. And I’m working on another novel which tells the story of three African American kids at a boarding school whose lives veer apart when one of them is kicked out but who come together again in the midst of the Black Lives Matter movement when one of their sons is racially profiled.

What are you reading right now?
Exit West by Mohsin Hamid and No One is Coming to Save Us by Stephanie Powell Watts.

MARGARET WILKERSON SEXTON received her BA in Creative Writing from Dartmouth College and her JD from UC Berkeley School of Law. Her first novel, A Kind of Freedom, will be published by Counterpoint Press in August 2017. Her stories have been published or are forthcoming in Grey Sparrow Journal, Broad! Magazine, and Limestone Journal, and her work has been nominated for a Pushcart Prize.