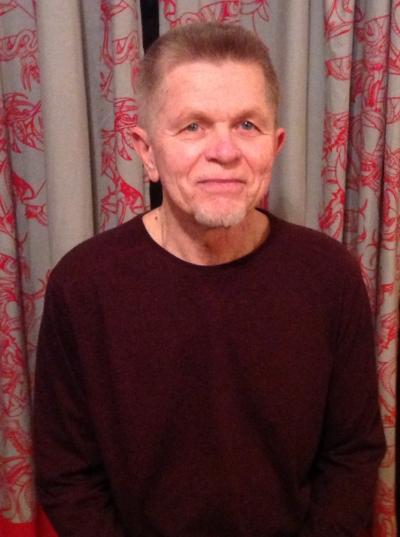 If I had really good eyes, I might see the threads that join me to the crowd, or even to one old man, this fellow next to me, for example, his cheeks as flush as a Christmas card Santa, his eyes moist, his hand over his heart as he gazes at the flag and sings. He is, by all accounts, normal.

Tell us about one of the first pieces you wrote.
I was a truant in high school, but I began writing a novel my junior year. I stuffed handwritten pages into an empty Tinkertoy box until it was full. I have no idea what my novel was about, but I remember my older sister, who never missed school, read a few pages and said, “This is sick.”

What writer(s) or works have influenced the way you write now?
I keep going back to Michael Ondaatje. In his novels and poetry, he writes from a place that is somewhere between wakefulness and sleep—call it the edge of a dream, where one’s habitual ways of seeing are swept aside.

Among the other writers and works are Maxine Hong Kingston’s China Men, James Baldwin’s Another Country, Karen Tei Yamashita’s I Hotel, Peter Matthiessen’s Shadow Country and The Snow Leopard, Nikolai Gogol’s stories (especially “The Diary of a Madman” and “The Overcoat”), and every now and then I reread Whitman’s “Song of Myself.”

I don’t claim to write like any of these authors, but they inspire me to find my own way to words. It seems that every writer has to discover their own eccentricities.

What other professions have you worked in?
I’ve worked as a flower vendor in New Orleans, a door-to-door carpet cleaning salesman in Chicago, a strawberry picker outside Newberg, Oregon, a truck driver during a Nebraska corn harvest, and others. Best of all, I worked alone as a night-watchman on Alcatraz Island for thirteen years and five months.

My best real job was teaching English as a Second Language and Spanish Literacy at City College of San Francisco.

What did you want to be when you were young?
I wanted to be a priest, but by age thirteen I faced a choice: Catholicism or puberty.

What inspired you to write this piece?
The late Anthony Shadid, a journalist who twice won the Pulitzer Prize for International Reporting, wrote: “History is sometimes written to buttress the myths that underlie our imagined identities.”

I believe national anthems, our own and those of other nations, are largely about myths. Maybe they are taken so seriously, as if they were sacred, because we lack the courage and will and intellect to look beyond myths toward deeper truths.

As a kid, I served in Vietnam as a medic in an infantry battalion commanded by Colonel George Armstrong Custer III. Before this mostly indescribable experience, I never thought about the National Anthem or what it meant. Afterwards, I’ve always felt a deep sadness and depression when I’ve had no choice but to listen to sentimental mush. “The rockets’ red glare, the bombs bursting in air…” Modern bombs tend to burst on the ground, and often do what they’re designed to do—kill and maim. How many Americans singing their hearts out know anything about what that looks like? For me, the National Anthem is the loneliest song in the world; it is also, at best, a sentimental lie.

It is somewhat common these days to see the Blue Angels or other fighter jets, buzzing major league ballparks and football stadiums before important games. The first time I observed the spectacle, my Catholic upbringing returned, and the words raced through me—“Lord, forgive them for they know not what they do.” My fellow citizens who gazed into the skies with pride and awe were––for me––almost unendurable. I had never felt more alone.

The Blue Angels are generally perceived as apolitical. At the old ball yard or a football stadium, they represent wholesome fun, a sort of wild hurrah for the red, white, and blue, a blind Yes to speed and might and power. Fuck that. My fellow citizens would be less starry-eyed if they could see the results of an air strike through a medic’s eye, or just one innocent corpse strewn across the earth.

In my novel Buffalo Boy and Geronimo, I wrote about my experience in the Vietnam War, which the Vietnamese call the American War. My unit suffered a lot of casualties, so I soon learned what AK-47s and rockets and booby traps can do to the human body. I saw immense destruction to the earth. By the time I left Vietnam, I realized that war is not primarily a soldier’s story. I don’t say this to in any way disparage our soldiers, especially since those in our current wars in Iraq and Afghanistan are generally ignored by an American public that is far removed from their experience. I say war is not primarily a soldier’s story because civilians bear the brunt of it, and the land and the animals are the most silent casualties. In Vietnam, I saw first-hand the destruction in the Củ Chi and Tây Ninh countryside, the forests and fields razed by bombs and defoliants, the land seemingly stripped of all life for as far as the eye could see. Sometimes I felt we were fighting the earth itself. Gun-ships could put a bullet in every square inch of a football field in less than a minute. Bombers, B-52s, blew apart rice fields, sugar palms, birds, bees, water buffalo, fish, grass, leaves—whatever conceals or sustains “the enemy.” If we couldn’t find the Vietnamese, we could—and did—blow up their land.

Is there a city or place, real or imagined, that influences your writing?
I grew up in a town along the Illinois River and the river’s still in me. There’s something melancholy about Midwest river-towns, but something deep and beautiful, too.

Do you have any rituals or traditions that you do in order to write?
Silence is my first language. I often meditate in a Vipassana Buddhist tradition before I write. Music sometimes helps, especially Gregorian chants. Sometimes all that helps is to wait.

What are you working on currently?
I'm working on a novel about a Palestinian wire-walker and an Israeli juggler. I've researched this novel for more than two years and will need to make at least one more visit to the areas I'm writing about-Nablus and Tel Aviv.

Among my friends on both sides of the Green Line are Mahmoud Masri, a medic in Nablus during the second Intifada and found of The Nablus Circus School, and Eden Fuchs, who served as an officer for twenty-two years in the Israeli Defense Forces. Eden, a filmmaker, now devotes himself to building partnerships between Israelis and Palestinians and to ending the Occupation.

What are you reading right now?
I’m re-reading Ocean Vuong’s On Earth We’re Briefly Gorgeous. Every sentence is gorgeous.

If you could work in another art form, what would it be?
The flying trapeze.

JAMES JANKO'S novel, The Clubhouse Thief, won the Association of Writers and Writing Programs (AWP) Award for the Novel and an Independent Publishers Book Award for Great Lakes Fiction. An earlier novel, Buffalo Boy and Geronimo, received the Association of Asian American Studies Book Award and the Northern California Book Award. Janko served in Vietnam as a medic in an infantry battalion commanded by Colonel George Armstrong Custer III.