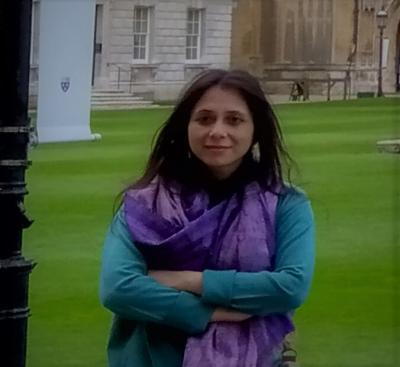 You know the greatest myth? ‘Mirror, Mirror, on the wall.’ World’s biggest hoax. Yes or no? Because the mirror never says: ‘You, my queen! You are the fairest of them all. —from “Mallika Reflects on the Events of Discount Monday,” Volume 60, Issue 4 (Winter 2019)

Tell us about one of the first pieces you wrote.
I’d written a short essay about my mother for our college magazine. Mothers, cows and festivals were common topics for essay writing in schools and colleges. My contribution found a bit of appreciation though. I remember being stopped by a couple of girls who weren’t really my friends and being told that I write well. I wasn’t especially interested in ‘being’ or ‘becoming’ a writer at the time. I suppose being told that [writing] was one thing I did well sort of nudged me along that path.

What writer(s) or works have influenced the way you write now?
I suppose everything you read and enjoy has some influence, although one can’t easily separate strands and locate those influences in one’s own work. The main thing I’ve picked up from the books I admired was the writers’ willingness to throw themselves into the telling of it without affirming existing form and genre norms. For instance, what Doris Lessing does with The Golden Notebook, or Saul Bellow does with Herzog, or Salman Rushdie does with Midnight’s Children, or Ursula Le Guin does with The Left Hand of Darkness. Among Indian writers, I really admire Uday Prakash, especially what he is able to pack into slender novellas. The experience of reading some of his work is like taking in a breath, and then finding that you’re holding it, and not quite able to exhale for a while. There are hosts of contemporary and senior Hindi and Urdu poets that I adore. Some of that work just reached into my gut and is now lodged there. Kunwar Narayan, Kedarnath Singh, Syed Ahmed Afzal. Afzal’s prose poems really transformed the way I thought about poetry and narrative, and the division between mythic and contemporaneous metaphors.

What did you want to be when you were young?I didn’t have a clue. For a while I thought I’d like to work in the professional theatre or learn filmmaking. But I started working as a journalist quite early, and then just kept at that, writing poems and stories in my free time.

What inspired you to write this piece?
Well, I’m a woman and I wish I could say that I am the sort of woman who rejects all norms around femininity. But I do go to a salon once in a while. In India, there are all kinds of salons, more frequently known as ‘beauty parlours.' Parlours come in all sizes and cater to all classes. Many women operate from their own homes or rent little shops in neighborhood markets. I’ve seen some of the fancier ones too, though I usually go to a ‘normal’ parlour, which caters to the average middle-class woman.

Women sometimes go to a parlour looking for some kind of life affirmation, for emotional reassurance rather than physical plucking and primping. I remember going to a fancy salon once for a haircut, having just recovered from a bout of malaria. I was alone most of that week and feeling quite shaken. I needed to treat myself to something. The haircut cost five times what it would in the place where I usually go. The stylist told me that my skin and hair was in bad shape, and that I needed to buy fancy shampoos that cost ten times my normal shampoo, which she wrote out as a ‘prescription.’ I walked out feeling angry and have sworn off the place.

I’ve overheard some strange and sad conversations over the years at various parlours. I see beauticians trying to coax you into spending much more than you can actually afford by thrusting fresh norms, which they’ve picked up from Western (usually North American) magazines, upon their clientele. I also see women coming to the same place for years, never pushed into trying anything beyond the thing they came looking for. The story was an attempt to capture some of these conversations and experiences.

Is there a city or place, real or imagined, that influences your writing?Yes, actually. Most places I’ve lived in—Delhi and Mumbai in particular—impact my writing. I’ve lived between these two cities over the last two decades, but also Lucknow, or anywhere I spend more than a few days.

Is there any specific music that aids you through the writing or editing process?No. I can’t really write with music on. Or even edit. I usually listen to music with words in it, and I can’t focus on my own words while listening to another set of words.

Who typically gets the first read of your work?
If it’s fiction, then trusted friends who are also writers themselves and whose tastes and judgment I respect. If it’s non-fiction, then a magazine editor, or publisher: whoever I’m pitching to.

If you could work in another art form what would it be?Dancing maybe. That’s one thing I love watching and marvel at when it’s don well.

What are you working on currently?Nonfiction. It is part memoir, part journalism and social commentary. The book examines the meaning of home, what it means to me, and what shape belonging takes in a particular place and time.

What are you reading right now?
I've been reading mainly toward the writing of the book mentioned above. I've just finished reading two books by a retired police officer who has written about institutional bias against religious minorities in the police force, and about the structural problems of poicing in India.

ANNIE ZAIDI writes across several genres including reportage, fiction, drama, and comics. She is the author of Prelude to a Riot, Gulab, Love Stories # 1 to 14, and Known Turf: Bantering with Bandits and Other True Tales, and the editor of Unbound: 2000 Years of Indian Women’s Writing. She is also the winner of the Nine Dots Prize for 2019 and The Hindu Playwright Award for 2018.