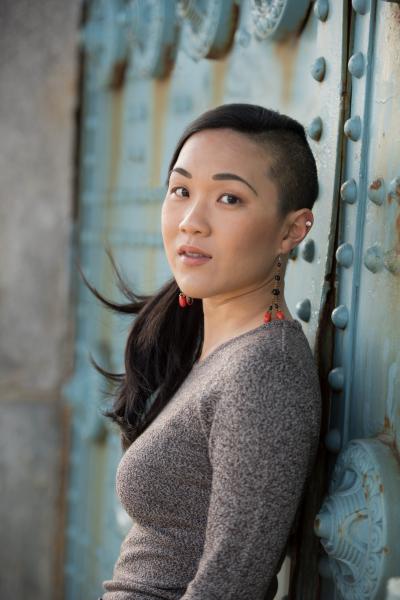 The tide is poised. Between you and I the end of the world

where an abandoned crane will either spit blue
blazing desert from its graffiti lips or smash
the crow-bedecked tenements in search of a trumpet..."
--from "The American Dream Writes to Orpheus" which appears in the Spring 2017 issue (Volume 58, Issue 1)

My first published poem was called The Catheter Speaks and it is about the aftermath of birth. It was a young, scrappy, wrenching poem.

This is a very hard question! At the risk of being reductive, I would say some of my most enduring influences in terms of craft and aesthetics have been Rainer Maria Rilke, Federico Garcia Lorca, Derek Walcott, Adrienne Rich, Nikki Finney, Mahmoud Darwish and Frank Bidart. I also really love and wrestle with the works of Paul Celan, Anne Carson and Raúl Zurita – I’m still trying to figure out how their poems do what they do.

I’ve been in the grassroots sector for about a decade, doing everything from organizing to political education to operations. Other than that, I’ve worked various odd jobs in retail, service, and academia. I’ve also been a mom for fourteen years.

A visual artist, but that wasn’t encouraged by my family, so my plan B was journalism. Certainly, I never thought I would be a poet or an organizer.

At the time I was working on this piece, I was seeing very little attention paid to the drone wars that the US was waging in the Middle East and North Africa. It wasn’t so much that I thought this poem would “raise awareness” about them, but I wanted to understand, for myself – during a period of “post-racial,” “breaking-the-ceiling” “hope” and “change” – what it was that permitted the American Dream to exact such a human cost somewhere else with such cynicism and impunity. Its pull and power is such that it is the closest thing, I think, to God, that we have known for the past century. Small and big sacrifices are made in its name all the time, often without a second thought. So I was thinking about a particular zone of sacrifice – a zone poised to be struck by a missile strapped to a drone that is being operated by a person thousands of miles away – and asking myself what kind of poem would the American Dream write about it.

Denpasar, where I grew up, does I think erupt and infiltrate whatever world I’m writing in at any given time – though it is specifically the Denpasar that I grew up in, not as it exists right now. Also, because of my early Christian upbringing, there is a kind of romanticism of the desert that persisted long after I parted with the religion. When I finally got to be in an actual desert – having lived with the referent of it for so long and in so many poems – I remember feeling like I had returned to a primary source.

I love having Ludovico Eunaudi’s compositions or Chopin in my ear when I’m working on a first draft. I prefer silence when revising though.

As a kid, I would often wake up to the muezzin’s call to prayer just before dawn. It taught me that a voice could pierce through the armor of sleep, could rearrange the mists, the city, the very properties of darkness itself. I think that’s why I like to write early in the day.

My third book-length manuscript and Sanctuary, a poetry workshop series for migrant poets in Philadelphia that I design and facilitate. I’m very lucky to have Asian Arts Initiative as my community partner and a grant from the Leeway Foundation for the project.

I just finished Sandra Lim’s The Wilderness, which is an astounding collection of poems. I’ve also been re-reading Larry Levis’ Elegy and am progressing through Anne Carson’s Decreation. On a non-poetry tip, I’ve just started Hegemony How-To: A Roadmap for Radicals by Jonathan Matthew Smucker, and N.K. Jemisin’s Inheritance Trilogy sits right at my bedside. Today I came home to a wonderful present from my partner – Adrienne Rich’s Collected Poems 1950-2012 – so it is possible that I will drop everything for that because The Fact of a Doorframe was absolutely seminal for me.

Born in Indonesia, CYNTHIA DEWI OKA taught herself English by reading classics in a Canadian school library. She is the winner of the 2014 Editor’s Prize in Poetry from Fifth Wednesday journal and an artist grant from the Vermont Studio Center. An alumna of the Voices of Our Nations Writers’ Workshop, she is currently poetry editor of Generations Literary Journal. Her poems have appeared in The Wide Shore, Obsidian, Kweli Journal, Black Renaissance Noire, Apogee, Terrain.org, Boxcar Poetry Review, Dismantle, the VONA Anthology, and others.