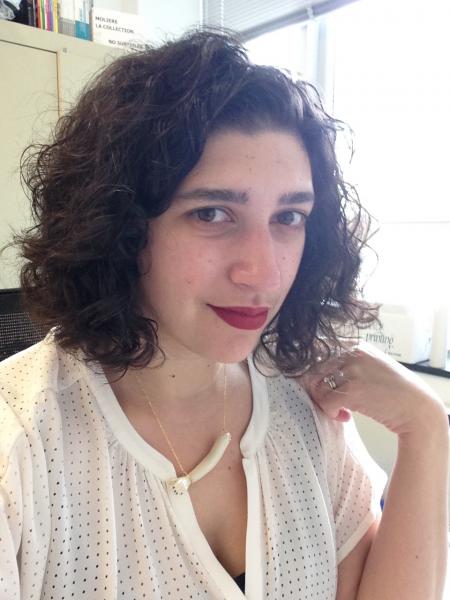 “On a recent list of top ten composers, my moody Chopin
didn’t make the cut—the critic said he’d never truly loved
the Romantic mode. It’s too personal, a biometric lock. Too magician
swallowing the handcuff key. The mystery of a list like this is less
of content than of order—I could tell you dark-horse Verdi here,
hipster Schubert there, a sheepish what up to damaged-goods Wagner--"
--from "The Romantic Mode" which appears in the Winter 2016 issue (Volume 57, Issue 4).

When I was eight, I wrote tiny picture books; one was a play about teleporting animals, another a story about raccoons who only ate kosher chicken carcasses. My work is still dotted with animals and meditations on religion, so I'm not sure how much has changed.

I found Mary Ruefle’s work a couple of years ago, and it changed my life. I wish I could be as expansive and generous in my train of thought. Ovid (in translation, my middle-school Latin is totally gone—I love Slavitt’s book of Ovid’s poems in exile.)

My primary job (the one that actually pays bills) is in administrative support. Sometimes I wish I could make money in writing, but I love that poetry is not tied to how my rent gets made. The pressure is off, and it's all about the work itself and enjoyment.

The only thing I can remember wanting to be was a dentist, but I attribute that to the Vectrex game system in my dentist’s waiting room, so really, I think my primary ambition was to be the owner of a Vectrex. Sadly, never realized.

In 2010, the New York Times did a list of the top 10 classical composers. I’m a very surface-level admirer of classical music, and I don’t think my enjoyment of it comes with any expertise—I actually play in an invite-only trivia league, and two of my weakest categories are (somewhat surprisingly) classical music and art. They’re things I like to enjoy, but don’t know much about. I was struck by the reviewer’s dismissal of Chopin, whose work I’ve always found beautiful. The reviewer’s thought is that the scope of Chopin’s work was too small, too personal, and that’s precisely what I like about it. Obviously, Chopin, like most names tied to the history of music, was not a woman—but I feel these dismissals happen all the time when women’s art is evaluated; we think “too small” or “too close," and I don’t think those are fair dismissals. If someone is generous enough to use art to reach out to you with her (or his) heart, why would you leave it suspended there?

Less a place than a time—I was organizing my poems by season a while ago, and I was surprised to find how much of my imagination lives in the winter. It’s not my favorite time of year, by any means, but I am not sure how well I’d live in a place that doesn’t have one. Part of what makes it so necessary to how I approach writing is that it’s a time of struggle, and it requires more engagement than other seasons. Writing comes easily to some, I know that, but I’m not a writer who can just pour words on a page. I need time, and thought, and space. Poetry is a critical, intense mode of thinking and expressing. Northern winter is a critical, intense mode of living.

I have three dear friends with very, very different aesthetic sensibilities, and we periodically meet up on a video chat (we live far from one another) and talk about our work. I’m very shy about showing drafts to anyone. Having done an MFA, I gained a lot of experience in how valuable criticism can be, but I also want to do things my own way, with my own voice. I can’t always make people understand my poems without making it into something that could have been written by anyone—I’ve found I just have to do the best work I know how and hope that I’ve let people in enough so they can see what I mean.

I wish I could illustrate. Every literary parent thinks they have a great children’s book in them, but I know I do. Unless I change it to be about indecipherable scribbles, though, I’m gonna have to find an illustrator. I also have spent a large portion of the past few years writing a series of poems that are a reworking of the myth of Callisto, in which the main figure is transformed into a bear. If ever I found an illustrator who’d collaborate with me, I’d be over the moon.

I started sending my first manuscript out last year. It got a few tiny nibbles, but no serious interest. It’s hard to find time to rework when you’ve got a full-time job, and then a fulltime baby on top of it, but I’m working on it. The Callisto poems are a huge part of this manuscript, and they are a serious undertaking. Many of them have this double-stranded narration, in which the voice of the woman and the voice of the bear oppose each other and try to get along in the same body. They don’t always have the same needs, or concerns. A hard song to sing, but to me, worth singing.

I’m devouring Ferrante’s Neapolitan novels. I don’t get a lot of time to read right now, and I have been going nuts reading novels on my Kindle, because the prime reading time for me is around 10:30 at night, daughter asleep, husband falling asleep, and I’ve got the lights off and a little glowing screen. Also, I went on a massive Margaret Atwood spree, and read The Handmaid’s Tale for the first time (not knowing anything about it) in the last weeks of pregnancy and the first of motherhood. There’s a whole essay in that. I know it.

Jen Jabaily-Blackburn lives with her husband and daughter in western Massachusetts. Selected for Best New Poets 2014 by Dorianna Laux, her work appears in Cimarron Review, cream city review, and The Common.